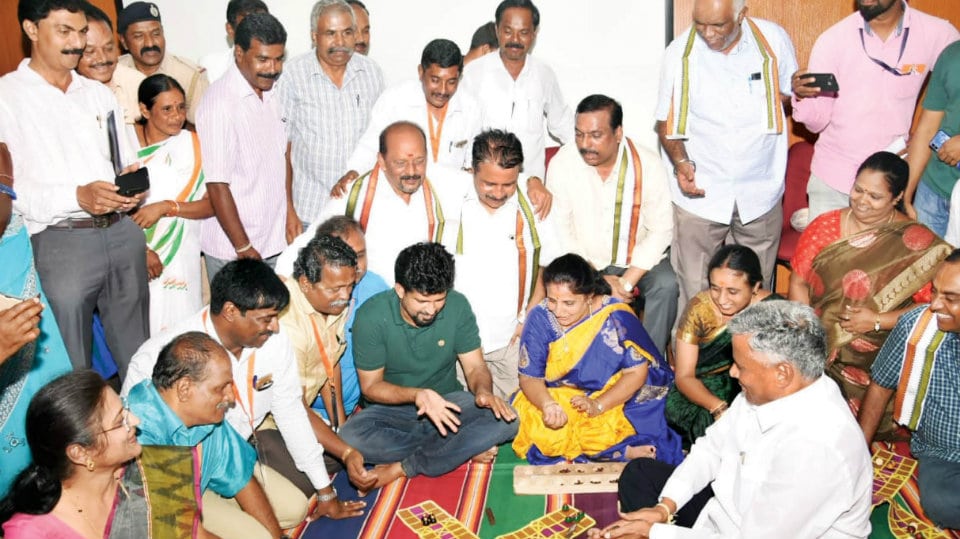 Mysuru:  It is obvious that it is increasingly harder for traditional games to compete against the ever-growing invasion of screens around  houses and swanky gadgets that grab the attention of children, youths and adults.

Televisions, smartphones computers, gaming consoles — houses are full of electronics within the reach of children that offer many different interactive entertainment options. Thanks to technology, fun with parents and in the street with their friends, playing classic games that have entertained so many previous generations have been forgotten.

Keeping the above benefits in mind, Dasara Desi games were organised by the Department of Heritage, Archaeology and Museums in association with Dasara Heritage Sub-committee at Dasara Exhibition Grounds last morning. It received an overwhelming response with pre-registered entries that numbered more than 600. There was no spot registration.

The event was conducted under the age groups of 10 to 16 years, 17 to 25 and above 25 years. Boys and girls, young men and women, besides adults vied with each other in their respective categories in indoor games such as Pagade (dice game), Snake and Ladder, Aliguli Mane and Chowka Bhara as well as outdoor games such as Hide and Seek, Hopscotch or Kunte Bille, Tug of War, Marbles, Bow and Arrow, Three-Legged Race, Chinni Daandu or Gilli Daandu, Top (Buguri) and Sack Race.

Interestingly, at the inauguration, District Minister V. Somanna, MP Pratap Simha and Mayor Pushpalatha Jagannath kept aside their party barriers and enthusiastically played the game of dice. They were surrounded by BJP leaders H.V. Rajeev, M.V. Ravishankar, M. Rajendra and others. Somanna, Simha and Pushpalatha played their moves deftly, attracting peals of laughter and witty comments from the onlookers.

Seeing the huge number of participants, the organisers decided to have eight people on either side to play tug of war so as to complete the event early. With too much of pressure applied, the rope snapped twice. With no way out, the strength of participants was reduced to four on either-side and the game went on smoothly.