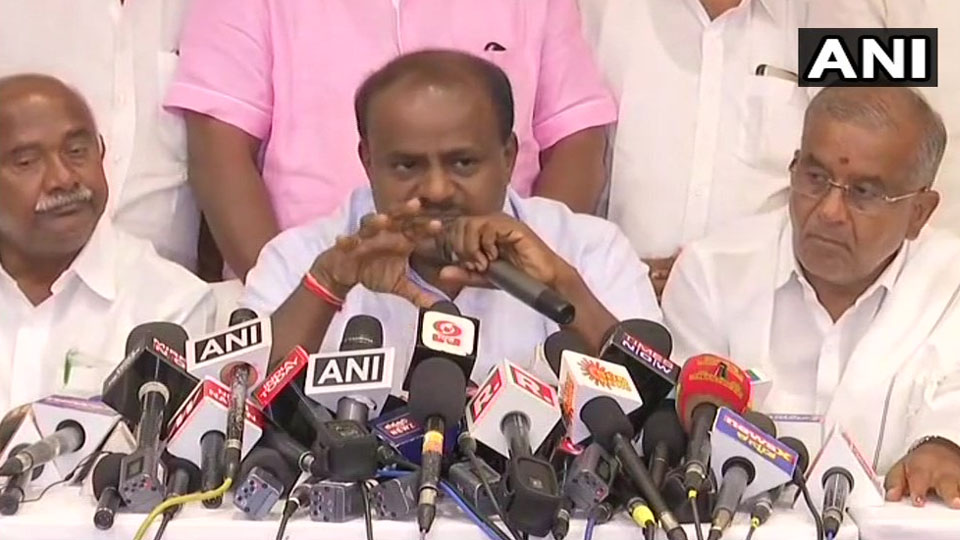 Bengaluru: With the election results throwing a fractured mandate in Karnataka and both the BJP and the JD(S)-Congress combine staking claim, all eyes are now on Governor Vajubhai Vala who will decide whom to invite to form the next government.

The BJP, which won 104 seats, emerged as the single largest party but fell short of majority. The Congress, with 78 seats, and the JD(S) with 37 — together they have 117 seats (with the support of 1 BSP and 1 Independent) — rushed to join hands and stake claim to form the government in a bid to keep the BJP out of power.

Supreme Court advocate and Congress leader Abhishek Manu Singhvi will head the legal challenge in the SC. Petition to be filed tonight in case the Governor does not invite Kumaraswamy to form government by then.

BJP State President B.S. Yeddyurappa, after being elected as the BJP Legislative Party (BJPLP) leader this morning, met the Governor to stake claim to form the next government.

Former Prime Minister H.D. Deve Gowda’s party, the JD(S), that finished third but has the “unconditional support” of the Congress, too said it should be invited first on the ground that the post-poll combine has 117 seats, which is well above the magic mark of 112 needed to form the government. The JD(S) will again meet the Governor this evening and hand over the letters of support signed by 117 MLAs.

After a meeting of JD(S) MLA-elects at Hotel Shangri-La at Vasanth Nagar in Bengaluru this morning, JD(S) State President H.D. Kumaraswamy, who is just one step ahead to become the CM with Congress support, alleged that the BJP was offering Rs. 100 crore and a Ministerial berth to his MLAs to defect to BJP. At the meeting, Kumaraswamy was elected as the JD(S) legislature party leader.

“This is the first time that a party has threatened opposition to this level. They have all the money in Delhi to pay Rs. 100 crore to the MLAs. Where are the Income Tax people? I want people to see all this,” he said.

“We will also poach”

“Forget ‘Operation Kamala’ being successful, there are people who are ready to leave BJP and come with us. If you try to poach one from ours, we’ll do the same and take double from you. I’m also telling the Governor to not take any decision which encourages horse-trading,” he said.

“I have been offered from both sides. I am not saying this loosely. There’s a black spot on my father’s career because of my decision to go with the BJP in 2004 and 2005. So God has given me an opportunity to remove this black spot. So I am going with Congress,” Kumaraswamy claimed.

Meanwhile, independent MLA R. Shankar gave his letter of support in favour of Yeddyurappa, bringing the BJP tally to 105 (104 BJP lawmakers + 1 Independent). After meeting the Governor, Yeddyurappa said, “I met the Governor and handed over letters of support that we have. He told me he will take the appropriate decision as early as possible. We have full confidence he will take a decision immediately.”

As many as 10 MLAs from Congress and two from JD(S) went “incommunicado” this morning and tense moments were witnessed across the Congress-JD(S) combine camps. A meeting of newly-elected Congress MLAs was delayed as the party couldn’t communicate with three of its MLAs. Even the JD(S) camp realised that some of its MLAs were missing.

The missing Congress MLAs are, Anand Singh, Nagendra Bhimanayak, Ganesh Hukkeri, Yashwanthrayagouda Patil, Zameer Ahmed, Tukaram, Mahantesh Kaujalagi, Satish Jarakiholi and Ramesh Jarakiholi. Anand Singh and Nagendra are believed to be close to the Reddy brothers linked to the BJP.  The MLAs missing from the JD(S) camp are Raja Venkatappa Nayaka and Venkata Rao Nadagouda. They were not present at the party’s legislative party meeting this morning in Bengaluru.

3 COMMENTS ON THIS POST To “MLAs up for Sale? Offer price Rs. 100 crore, alleges Kumaraswamy”