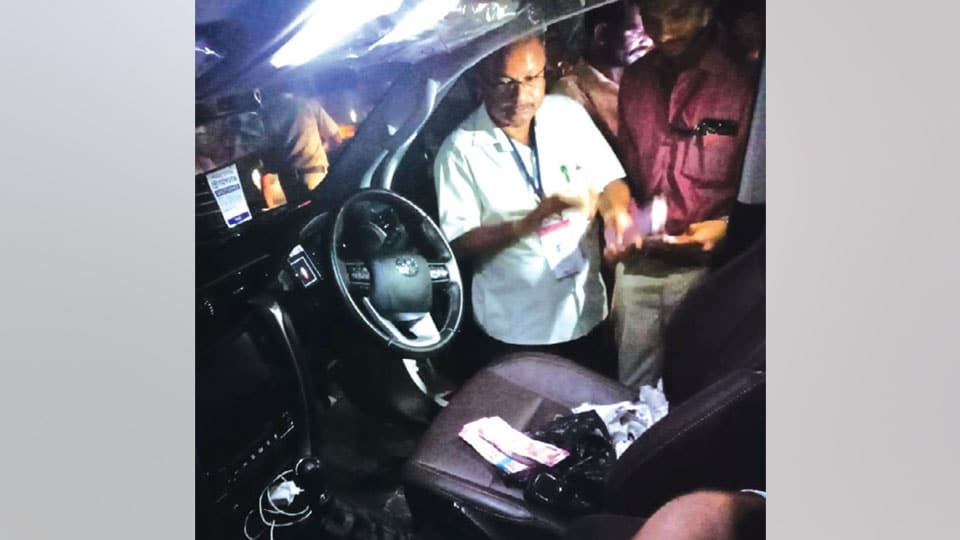 Periyapatna:  Election officials, led by Tahsildar Govindaraju and Sectoral Magistrate Krishna, along with the Police and Paramilitary Forces, have seized Rs.8 lakh cash yesterday, which was allegedly being transported in a car belonging to Mysuru District Congress President Dr. B.J. Vijaykumar’s brother B.J. Basavaraju to be distributed among the voters.

The driver of the car, identified as Ganesh, has also been taken into custody.

Following a tip off that cash was being transported in a Toyota Fortuner SUV, Tahsildar Govindaraju and Sectoral Magistrate Krishna, along with Police personnel, waited for the car and intercepted it in front of Haripriya Hotel on B.M. Road at about 8 pm yesterday.

As driver Ganesh failed to produce any documents pertaining to the cash, the officials have seized the cash and the vehicle besides taking Ganesh into their custody for inquiry.

It is learnt that when the Police called B.J. Basavaraju over the phone, he (Basavaraju) is said to have told them that the cash was meant to purchase fertilizers for the crops grown in his field. But it is also learnt that the Police have also found a list with names for whom the cash was supposed to be distributed.

Following the seizure of cash, Sectoral Magistrate Krishna has lodged a complaint at Periyapatna Police Station. The Police, who have registered a case in this regard, are investigating.