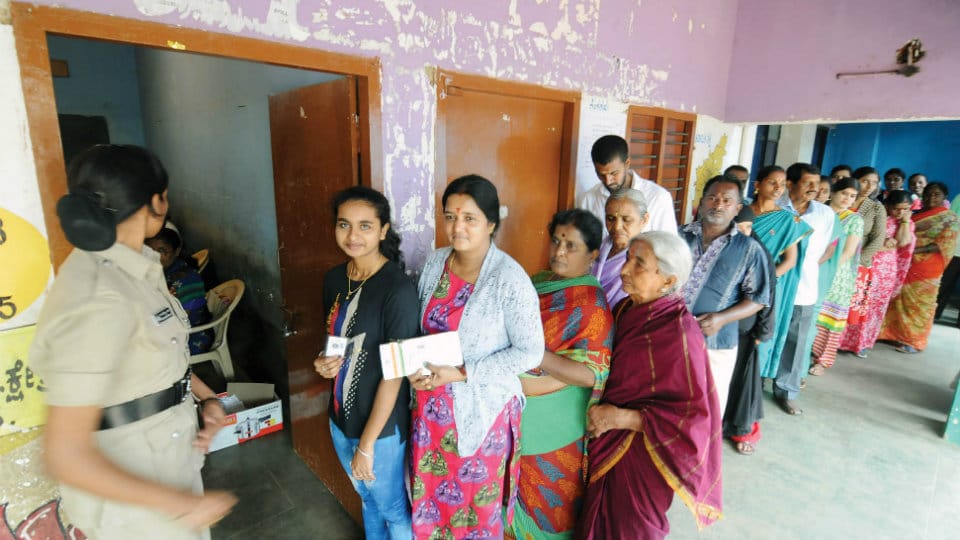 Mysuru:  In what is considered as the first litmus test for the JD(S)-Congress coalition Government in the State, the voting to the 65 Wards of the Mysuru City Corporation (MCC) began at 7 am today.

The coalition partners are contesting the MCC polls separately even as 102 other Urban Local Body (ULB) polls including three City Corporations of Mysuru, Shivamogga and Tumakuru are going to polls today. The elections are also dubbed as a precursor to next year’s Lok Sabha elections.

Apart from the MCC, the voting for T. Narasipura, Periyapatna and H.D. Kote Town Panchayats in Mysuru district is taking place today. The voting for the MCC Council which began on a sedate note at 7 am later picked up pace with voters lining up in queues in front of 725 polling booths and 90 auxiliary booths (total 815 booths) set up across the city, as hours passed by. The city recorded 25.62 percent voting till 1 pm.

The MCC polls is witnessing a keen tri-cornered contest between the Congress, JD(S) and BJP, which are vying with each other to gain control of the State’s cultural capital of Mysuru. Also, there are many independent candidates who are trying their luck in the elections. The JD(S)-BJP combine had ruled in the past 5 years, with the Congress sitting in the Opposition.

The polling will end at 5 pm with Police providing tight security at all the polling booths to ensure a free and fair polling. Before the polling commenced, election officials who included Presiding Officer (PO), Assistant Presiding Officer (APO), first and second Polling Officer, conducted a mock polling exercise for one hour from 6 am to check the functioning of EVMs (Electronic Voting Machines). 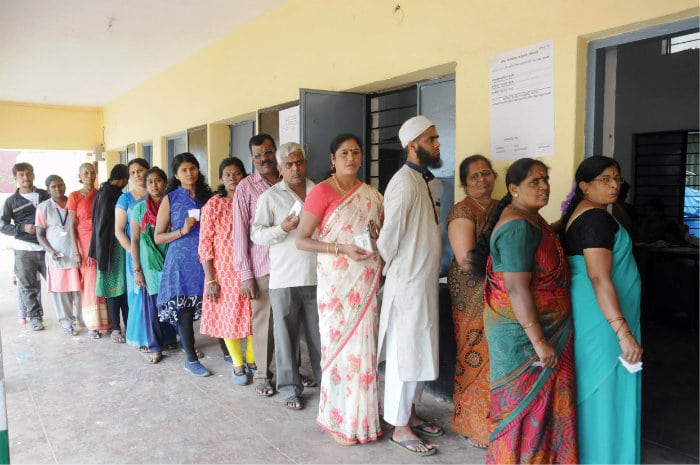 The MCC officials and political parties had distributed voter slips to voters at their doorstep over the past 10 days. However, the authorities had made arrangements at the polling booths to issue voter slips to those voters who had not got such slips. Confusion prevailed in several wards as some of the voters’ names were missing from the electoral rolls.

While voting in some Wards was moderate, several wards witnessed brisk polling within the first few hours of voting. The voters were required to carry any one of the specified Identity Cards to the Polling Booths in order to exercise their franchise.

However, there was a flip side too as some voters found their regular Polling Booths shifted to other locations and this was largely due to the Ward delimitation exercise, which these voters were unaware of. The poll officials were seen guiding such voters to their shifted polling booths.

In all, 393 candidates, including 163 women are in the fray for the 65 Wards of the MCC including BJP, Congress, JD(S), BSP, SP, SDPI, Independents and rebel candidates who are contesting against the official party candidate.

The City Police had made elaborate security arrangements for peaceful polling with the deployment of nearly 2,000 Police personnel and Home Guards, including those from CAR, KSRP and Mounted Police. The Election Commission had imposed prohibitory orders in around 200 metres radius of all polling booths in order to ensure free and fair polling. 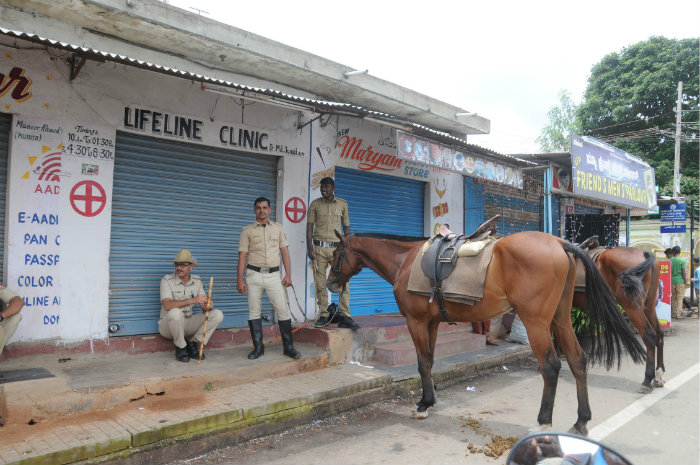 Polling in 20 MCC Wards coming under Krishnaraja Assembly (KR) segment, saw a poor voter turnout till afternoon, with some booths not even recording three figure mark of voters who had exercised their franchise. 14 of the 20 Wards in KR Assembly segment had been reserved for women from different categories.

However, some voters had to turn away disappointed as their names were not found in the polling booths close to their homes but were shifted to other booths due to ward delimitation and follies of the election wing of the MCC. This scene was witnessed in almost every Ward. 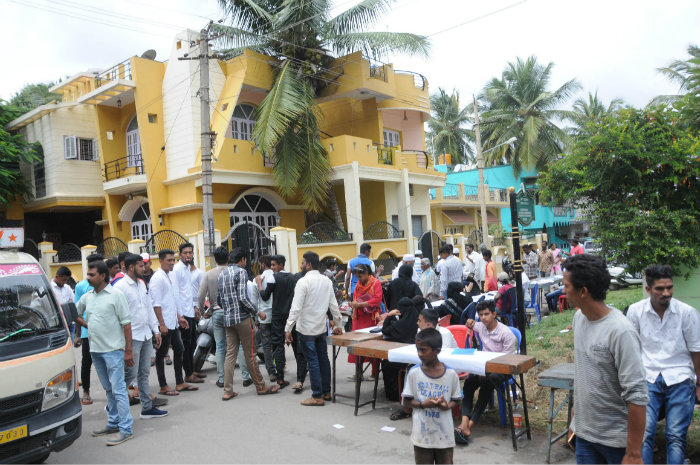 Voting at NR Constituency, which began on a moderate note at 7 am, later picked up momentum with a large number of voters lining up in queues at polling booths as the day progressed. Most of the Wards in NR Constituency had recorded 35 per cent polling till 12.30 pm and the voting is expected to be more brisk after Friday prayers as most of the Wards have a large number of minority community voters.

Counting of votes on Sept. 3

The counting of votes will be taken up at 8 am on Sept. 3 (Monday) at Maharani’s College of Commerce and Management on Valmiki Road, Vinayanakanagar (Paduvarahalli) and the results are expected by noon on the same day.

After the polling ends at 5 pm today, the EVMs after de-mustering process, will be placed in the over 16 Strong Rooms set up at Maharani’s College of Commerce and Management under tight Police security.