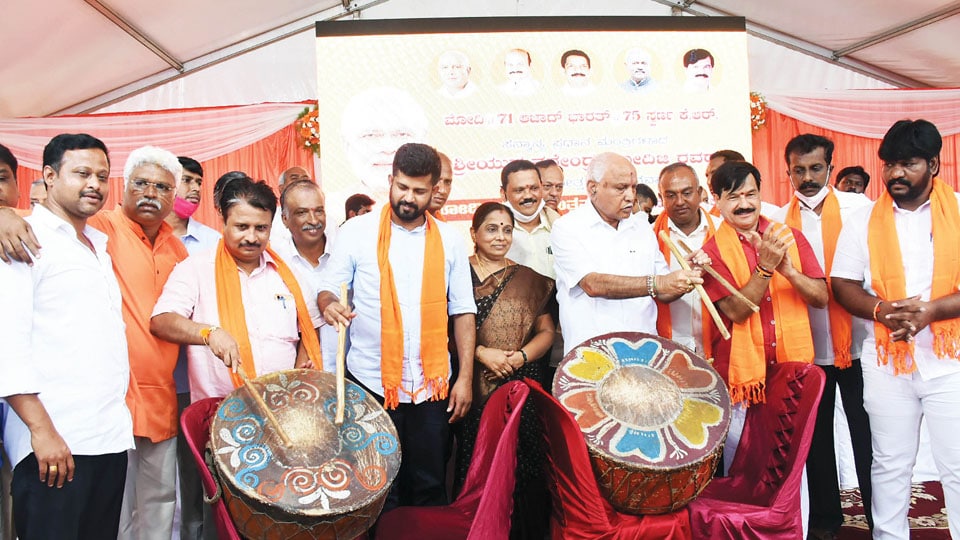 Mysore/Mysuru: India is developing fast and steadily under the leadership of Prime Minister Narendra Modi and the progress has made the world look up at India, said former Chief Minister B.S. Yediyurappa.

He was speaking after inaugurating ‘Modi Yug Utsav’, a 20-day event under the title ‘[email protected]’ and ‘Azadi Ka Mahotsav-75’ organised in Krishnaraja Constituency under the leadership of MLA S.A. Ramdas as part of Modi’s 71st birthday celebrations. The event in the city was held at a park near Ramalingeshwara Temple in Vidyaranyapuram this morning.

Asserting that Modi has the capability to lead the country in the right direction for many more years, he said that he has prayed the almighty to give strength to Modi to carry forward his mission and vision for the country.

Ramdas, who delivered the keynote address, lauded the former CM for implementing various schemes and programmes aimed at welfare of all sections of the society.

Highlighting the details of the 20-day event that is taking place from today till Oct.6, Ramdas said that today, five programmes have been inaugurated — ‘Matru Vandana’ for pregnant women during which each beneficiary will get Rs. 5,000, ‘Poshan Abhiyaan’, aimed at providing nutritious food to children, grown up girls, pregnant women and lactating mothers.

This apart, distribution of ‘Bhagyalakshmi Bond’ to beneficiaries, inauguration of an informative expo on the nearly 4,200 programmes, projects, plans, schemes etc., launched by the BJP Governments at the Centre and the States and  release of a booklet detailing the events featuring the 20-day Modi Yug Utsav programme.

MP Pratap Simha said the expansion of Mysuru-Bengaluru Highway and Mysuru Ring Road development works would be completed before next Assembly polls. Modi is the true leader of the people, he said highlighting the Kisan Samman Scheme.

Earlier, Yediyurappa, who came by road on his first visit to the city after stepping down as the CM in July last, was given a rousing reception near Suttur Mutt. He later proceeded to Suttur Mutt and sought the blessings of Sri Shivarathri Deshikendra Swamiji. He also had breakfast at the Mutt.

There was an element of surprise at Suttur Mutt as Nanjangud Tahsildar Mohana Kumari, who is at the centre of controversy over the demolition of Huchhagani Sri Mahadevamma Byraveshwara temple in Nanjangud taluk, visited the Mutt and met Shivarathri  Deshikendra Swamiji and Yediyurappa and sought their blessings.

Later speaking to press persons at the Mutt premises, Yediyurappa, referring to the demolition of places of worship, said that it was wrong on the part of officials to demolish temples and CM Basavaraj Bommai has given instructions to the authorities for stopping the drive. He further said that he would urge the Government not to raze Temples for any reason in the future.

Replying to a query on the possible contest of his son B.Y. Vijayendra, who is one of the State BJP Vice-Presidents, in the forthcoming Assembly by-polls, BSY ruled out the contest of Vijayendra  in any one of the two Assembly segments (Hangal and Sindhgi) for which by-polls are to be held. Pointing out that at present, Vijayendra is on an organisational tour of the State, he asserted that it has not yet been decided from which seat Vijayendra would contest.