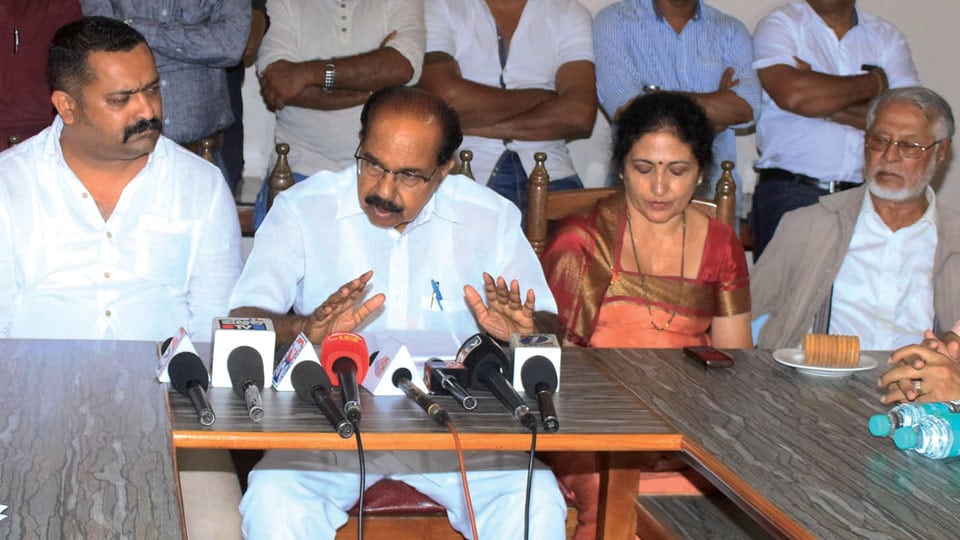 Moily, who is also the Chairman of the Parliamentary Standing Committee on Finance held a meeting with officials at Harangi in the  district recently and sought information and statistics about the relief and rehabilitation works.

He also visited flood and landslides affected villages and took stock of the damages.

Later, addressing a press meet at Sudarshan Guest House in Madikeri, Moily said that the natural disaster has caused enormous damage to Kodagu, with the loss of many lives and properties.

Maintaining that another Geological Survey was needed to exactly assess the damage due to flood and landslides, he said that officials have provided information on the extent of losses and added that  7,804 hectares of commercial crops and 11,838 hectares of horticultural crops were washed away in the unprecedented floods.

Noting that with losses amounting to thousands of crores of rupees and that the State Government alone cannot fund wholly for rebuilding of Kodagu, the former CM Veerappa Moily said the Centre should come to the aid of the State by announcing a special package of Rs. 10,000 crore.

Continuing, he said the Kodagu administration has identified 100 acres of land for building homes to flood victims and it was also necessary that 743 families living in danger zones should be shifted elsewhere, for which he will soon hold a meeting with Karnataka and Kerala Chief Secretaries and members of Parliamentary Standing Committee on Finance. The outcome of this meeting will be reported to the Centre, the Union Home Minister and the Finance Minister. The Kodagu disaster issue will also be raised at the Winter Session of Parliament scheduled to take place at the end of this year.

Complimenting the Kodagu district administration for effective relief and rehabilitation works, he praised the efforts of officials in the quick reconstruction of damaged roads.

Complimenting the strong will of the people of Kodagu amidst the devastation, Moily announced that he would contribute Rs. 10 lakh out of MP Fund and his one month salary to Kodagu Relief Fund. He also appealed the public and organisations to donate generously for rebuilding Kodagu.