Home » News » Where abusing Gods is the way of worship 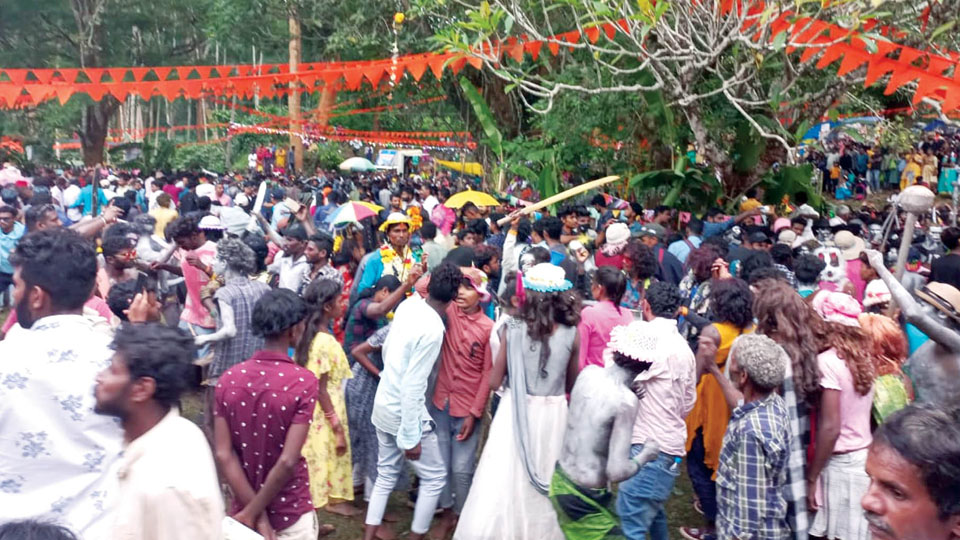 Where abusing Gods is the way of worship

Gonikoppa: Yesterday, the fourth Thursday of May saw the culmination of ‘Kunde Habba’ in parts of tribal-dominated South Kodagu, Hunsur and Hanagodu that borders Nagarahole Tiger Reserve.

It is a peculiar festival where choicest abuses are hurled against the Tribal Gods Ayyappa and Bhadrakali and this is a tradition diligently followed by the tribal communities — predominantly, Jenukuruba, Betta Kuruba, Kuruba and Yerava communities — for centuries.

They are the original inhabitants of Kodagu and forests are their homes. Now due to strict forest laws, they are displaced and many work as labourers in estates and fields. The influential among them have got a good education and are settled in cities also. However, most of them depend on Government welfare schemes for survival.

Usually, the festival begins three days before the last Thursday of the May month and it is celebrated with pomp and gaiety. Bawdy abuses rent the air in South Kodagu, especially Gonikoppa, Ponnampet, Pollibetta, Balele, Maldare, Siddapura, Thithimathi, Devarapura, Periyapatna, fringes of Nagarahole Tiger Reserve, tribal settlements and now the festival has extended till Hanagodu and Hunsur, thanks to hundreds of Government-sponsored settlements.

The highlight of this festival is participants hurling vulgar abuses and collecting alms. Weird attires, gaudy outfits with props that signify vulgarity are worn and vulgar abuses are hurled at every passer-by. The tribals hold long bamboo poles in their hands along with beating objects including empty plastic drums, and vessels. The sound of beating objects rends the air as tribals make merry.

Cross-dressing is a common practice for tribals during the fest. Wearing weird and garish make-up and getting dressed up in women’s clothes, men hurling abuse and singing vulgar songs demanding money from people are also part of the festival. Though vulgar abuses are hurled at women, they do not mind as they know that they are not the actual targets.

Smeared in mud and colourful paints, they head out on a procession to openly dismiss the God who once abandoned his tribe. The tribal communities believe that Lord Ayyappa and Goddess Bhadrakali betrayed the tribal people and in revenge, they abuse them to get back their affection on the fourth Thursday of May.

Legend has it that when Lord Ayyappa and some tribals went to the forest to hunt, he met Bhadrakali and fell in love with her. The smitten Lord went with Bhadrakali and forgot the tribals who felt ignored and cheated. They later started observing the day as a festival to commemorate the incident by abusing the Gods.

After marching on the roads and collecting alms even by stopping vehicles and crowding in front of shops, the tribals converge at the Bhadrakali Temple in Devara Kadu (sacred grove) at Thithimathi. They dance around the Temple and even here, they hurl choice obscenities in praise of their deities. But the liberty of abusing the Gods is taken only during Kunde Habba. On other days, the Gods are revered and ardently worshipped.