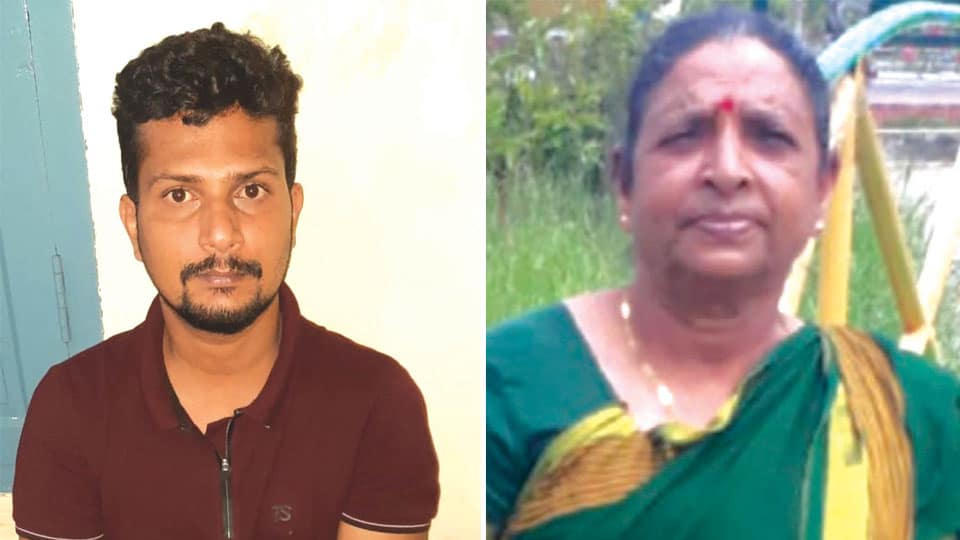 Madikeri: A mechanical engineer from Moodabidri, an outsourced employee of a posh private resort near Madikeri, has been arrested in connection with the murder of an elderly woman. The accused had allegedly killed the woman as he was drowned in debts and had a strong inclination that the woman had a good collection of jewellery and also cash.

The arrested has been identified as 30-year-old Anil, a mechanical engineer from Moodabidri, who was working as an outsourced employee of Club Mahindra Resort. He had allegedly murdered 70-year-old Lalitha, at her house in Kalakeri Nidugane village in Madikeri Rural Police Station limits on Feb. 22 and had stolen gold jewellery and cash from her house.

Lalitha was the wife of soldier late Bailadi Honnappa and she lived alone while her son Gopalakrishna worked at a private firm in Mysuru and daughters Meena is a resident of Bengaluru and Chandravathi is a resident of Kallugundi in Kodagu-Sullia border. About 72 grams of gold ornaments worth Rs 2.80 lakh was stolen by him from Lalitha’s house.

After the murder, Madikeri Rural Police had kept a close watch on suspects and had not got any clues from the crime scene as all evidence was erased. Superintendent of Police Kshama Mishra told reporters in a press meet that her team had an inclination that someone living within the close proximity of the house had committed the murder. As such they had kept an eye on the employees of the resort that is near Lalitha’s house.

Thyroid problem was an alibi

When the Police were questioning the resort employees, it came to light that Anil had worked in the resort for one week after the crime as he did not want the Police to suspect him. After a week, he told his manager that he had thyroid problem and had to go to Moodabidri, his native place for treatment. He had not returned to work giving an alibi of treatment. Actually he had lied about thyroid issue.

On suspicion, the Police scanned his Call Detail Records (CDR) and found a location match to Lalitha’s house on Feb. 22. Confirming the details, the Police cornered Anil at Moodabidri and brought him to Madikeri.

During the investigation, Anil admitted that he had murdered the elderly woman, by attacking her with an iron rod. He imagined that Lalitha had huge cash and jewellery as she was living alone and if she was killed and robbed, all his debts can be cleared.

About 72 grams of gold ornaments worth Rs 2.80 lakh, stolen by him from Lalitha’s house and sold at various places in Moodabidri and Mangaluru, have been seized, along with Rs. 4,000 in cash, weapon and a motorbike used for the crime.

Since the last 25 years, Lalitha was staying alone in the Kalakeri Nidugane house that is surrounded by coffee estate. As her routine, on Feb. 22 too, she returned home from her estate and was readying to take bath after igniting firewood. Anil, who was waiting at the spot came behind her and hit her head with the iron rod.

He later entered the house for the loot. The crime came to light as Chandravathi, one of her daughters spoke to Lalitha on the morning of Feb. 22. As per daily routine, she called her mother again at about 7 pm but the call was unanswered.

Lalitha’s daughter repeatedly called her mother till about 8.30 pm and as the calls were not answered, her daughter later called her brother Gopalakrishna and sister Meena and informed them that something was amiss. A relative, who lived close by was sent and he found Lalitha’s body in the bathroom with the doors of almirah, cupboard and wardrobe ajar in the bedroom.