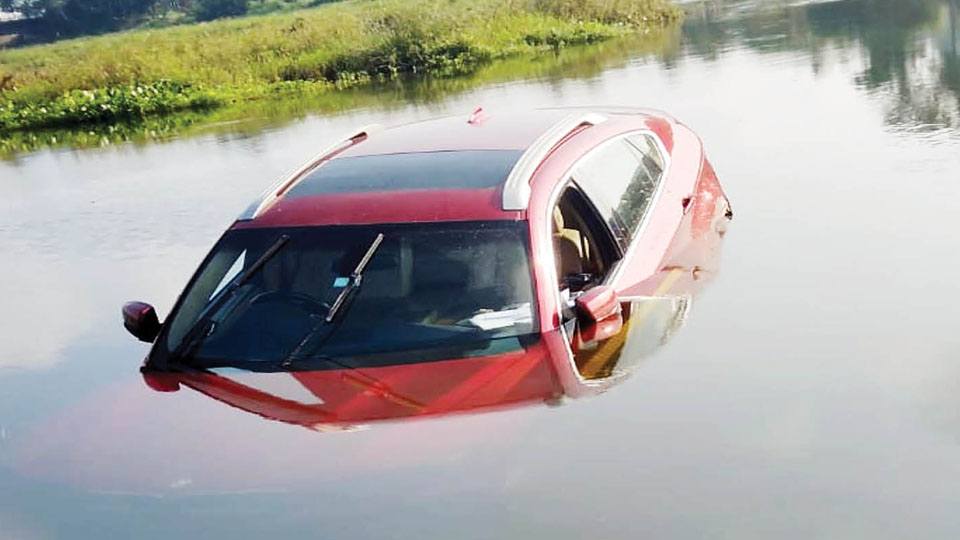 Mysore/Mysuru: A depressed youth, who was hallucinating an attack, drove his BMW straight into River Cauvery at Ganjam in Srirangapatna on Wednesday evening. The car was retrieved yesterday and the youth has been admitted to NIMHANS.

The youth hails from Bengaluru and was in a state of deep depression after his mother’s death a month ago. On Wednesday morning, he drove his car from Bengaluru to reach Bellur Cross where he rammed against a person. Fortunately, the person sustained just minor injuries.

The youth was later summoned to the jurisdictional Police Station where he admitted to rash driving. At the request of his family members, the Police let him off with a warning before making him write an apology letter. He later told his family members that he would come home and asked them to leave for Bengaluru.

Instead of heading to Bengaluru, the youth came towards Mysuru and headed to Ganjam in Srirangapatna. He reached the Karighatta Bridge near Nimishamba Temple after dark and drove his car into River Cauvery. While he managed to get out of his vehicle, the BMW sank into the water.

Seeing this, several local villagers reported the incident to the Srirangapatna Town Police. Inspector Puneeth and team visited the place and confirmed the presence of the car underwater and later summoned the youth to the Police Station. Meanwhile, divers and Police personnel retrieved the car.

The youth told Police that someone was chasing him from Bengaluru and were trying to kill him. This forced him to hide his car under water, he said. After some time, he gave another version to the Police. Inspector Puneeth told Star of Mysore that they realised that the youth was disturbed and summoned the family members.

They reached the Police Station and told the Inspector that the youth was depressed after his mother’s death. Taking pity, the Police let him go along with the family. The car was towed to Bengaluru and the youth was shifted to NIMHANS for treatment.