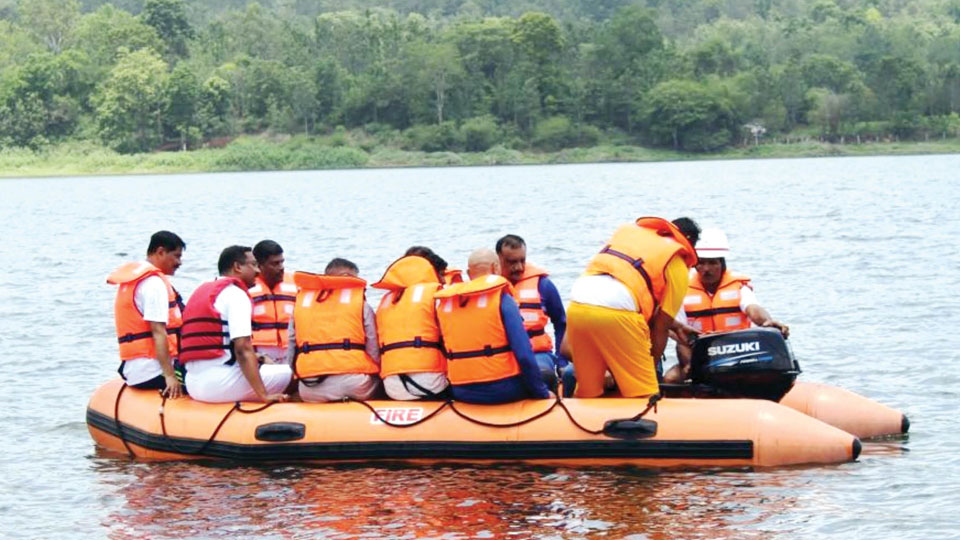 Kushalnagar: The Kodagu District Disaster Management Authority (DDMA), along with the Fire and Emergency Services Department conducted a mock exercise to gauge its preparedness for the recurring annual floods in the District.

The event was to prepare the personnel for any major flood-like situation in Harangi, Kushalnagar and surrounding areas like what happened in 2017 and 2018 when thousands of cusecs of water was released from the Harangi Dam. It also prepared the personnel to tackle other floods and landslips.

The exercise was conducted yesterday at Basavanahalli at the Harangi Dam backwaters which is nearing its maximum capacity, thanks to rains. Apart from preparing the personnel for the task of rescue and relief as soon as people reach out to the ‘1077’ emergency number, the exercise was to build confidence among the people that a dedicated force is present in the district in case of natural calamity.

The mock drill included the operations conducted during the rescue of people and livestock during floods and landslides. As part of the drill, information was provided to people on the precautionary measures to be followed. Situations including rescue of drowned persons due to boat capsize, river crossing rope rescue, resuscitation of victims, use of improvised floating aids and deep diving in case to fish out bodies were demonstrated with dummies.

Also, demo sessions along with emergency equipment and tips including rescuing people at risk, providing first-aid service, bringing people and their assets to a safe place and informing local security personnel were demonstrated. The personnel were simulated to act fast and were told that the priority was saving lives and shifting the affected to immediate medical care.

READ ALSO  Cauvery Basin Dams getting filled up before monsoon

Kodagu Deputy Commissioner Dr. B.C. Satish personally supervised the arrangements and also wore a life jacket and the rescue outfit to sail in a rescue boat where the demonstration of the rescue was being done for the personnel. Later, the DC said that the aim of the exercise was to check the disaster preparedness of all the departments and find the gaps in resources and communication systems.

A team from the Geological Survey of India (GSI) will visit the vulnerable areas in the district. Vulnerable areas will be identified across the district based on the floods and landslides that hit Kodagu and the NDRF and SDRF will be doing their coordinated groundwork based on this, Dr. Satish added.

The DC said task forces will be constituted at the District, Taluk and Gram Panchayat levels during monsoon to coordinate rescue and relief in case of any emergencies. District-level, Taluk-level Nodal Officers have already been appointed to coordinate the efforts at all hoblis and necessary instruction and information have been provided.