Home » News » Bangiya Samithi to celebrate Durga Puja in city from Oct. 15 to 19 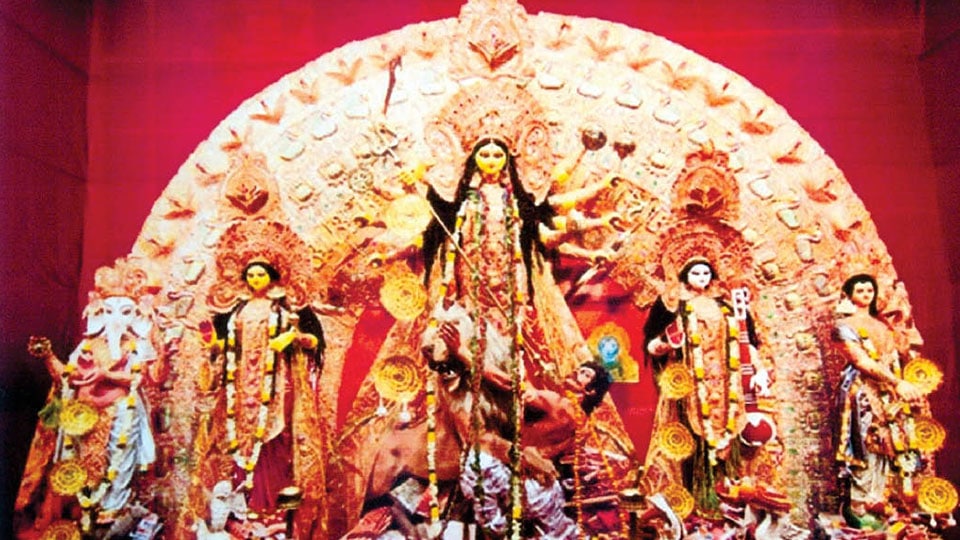 Bangiya Samithi to celebrate Durga Puja in city from Oct. 15 to 19

Bangiya Samithi (Bengali Association), Mysore, is celebrating Sri Durga Puja for the last 39 years. Durga Puja has a special significance in Mysore since Goddess Chamundeshwari, another form of Durga, is the presiding deity of Mysore.

Durga Puja will be celebrated at Shivamma P.V. Mahadevappa Choultry on KRS Road in city from Oct. 15 to Oct.19. The programmes comprise puja, anjali, arathi and prasad distribution. Evenings are earmarked for cultural events showcasing the culture and tradition of Bengal.

The festival of Durga Puja commemorates the victory of Goddess Durga over the Demon Mahishasura and celebrates Her annual visit to terrestrial home. The central image of Mother Goddess is in iconographic conformity to her description in Devi Mahime, popular as Chandipat which is recited during the puja.

Flanked by Goddesses Lakshmi, Saraswathi and Ganesha, Kartikeye, the 10-armed embodiment of Shakti has a weapon in each hand with Lion as mount (Singhavahini) and the spear thrust into the chest of demon in human form, half-emerged from the carcass of slain buffalo.

The significance of Durga Puja is well-documented in our scriptures. Devi Mahima, a part of Markandeyapurana, Sri Chandi recounts how devatas, after protracted war, were defeated by Mahishasura. The devatas approached Brahma, who took them to Vishnu and Shiva for protection. Vishnu, the supreme Lord, through his cosmic energy, created Devi Durga who was Shakti, the repository of infinite energy and power.

Devi Durga, who undertook the task of ridding the world of oppression, was empowered and armed by all Gods. Lord Shiva gave his Trident, Lord Vishnu his Sudarshan Chakra, Kubera (The God of Wealth) gave his Club. With Lion as her mount, the Divine Mother challenged the demons. In a fierce battle, she killed the demons and ultimately faced Mahishasura, their chief.

Despite deceptive trick adopted by the buffalo-headed demon, Devi Durga overpowered him cutting off his head with the sword and thus came to be known as “Mahishasuramardini”.This is the day when Vijay Utsav or Vijayadashami (victory) is celebrated. This aspect of  Durga Puja is celebrated in Bengal and the whole of Eastern India.

The other aspect of Durga Puja is based on “Ramayan,” victory of supreme Lord Rama over demon Ravana in Lanka. Rama prayed and worshipped the Divine Mother Durga for nine days for blessings to fight Ravana. On the ninth day, Durga appeared and handed him over the empowered weapon to kill Ravana and blessed him success. Rama killed Ravana and liberated the earth from the demon. Thus, Vijayadashami or Dushera is celebrated on the tenth day. This celebration is primarily held in entire North India as Ramleela.