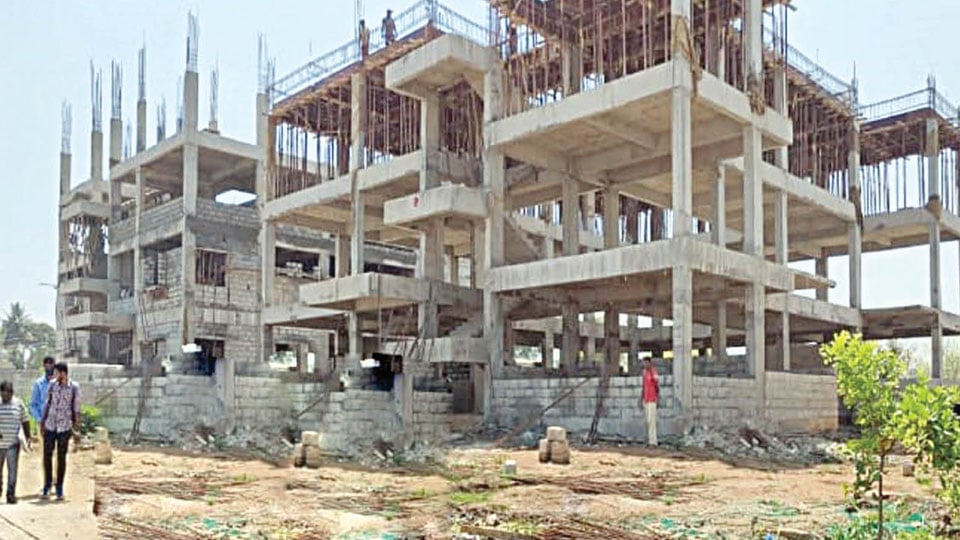 Government Departments build 26 new hostels in Mysuru; 13 to be ready by December this year

Mysore/Mysuru: The construction of 26 new hostels for students by various Government Departments is in full swing in Mysuru district and at least 13 hostels are expected to be ready by the end of this year.

With a steady increase in the number of students taking admission to hostels, the Departments have resorted to construct new hostels to meet the growing demand. Of the total 26 hostels, 8 belong to the Department of Social Welfare, 3 Morarji Desai Hostels and 15 belong to Dept. of Backward Classes Welfare.

As many as 15 hostels are being constructed in Mysuru City and the rest of them are in Nanjangud, K.R. Nagar, H.D. Kote and Hunsur taluks. Under the Social Welfare Department, there are 80 pre-matric and post-matric hostels of which 13 are in rented buildings. As many as 6,459 students have taken admissions into hostels during 2019-20.

There are 23 pre-matric and post-matric hostels and 21 Ashram Schools for tribal communities under the Department of Scheduled Tribes Welfare. While 2,545 students have obtained admissions into Ashram Schools, 1,537 have enrolled their names for the hostels.

Places have been finalised for the construction of eight new hostels by the Social Welfare Department but works are yet to begin. Out of eight, five will come up in Mysuru city and three in the district.

Mysuru Urban Development Authority (MUDA) has allotted Civic Amenity (CA) sites at Railway Layout in Ramabai Nagar and Karnataka State Revenue Department Employees’ Layout in Srirampura for the construction of hostels. However, funds are yet to be released by the Department.

Out of the 15 new hostel buildings planned by the Department of Backward Classes Welfare, seven will be in the city and eight in other areas. The Works on construction of 10 hostels are on and the ground-breaking ceremony is yet to take place for two new hostels. The spots are not finalised for three more hostels.

The construction of three Morarji Desai hostels is underway and expected to complete by the end of the year.

The District Officer, Department of Backward Classes Welfare, H.S. Bindya, said it was difficult to provide basic facilities to students in rented buildings. Not much space was available in rented accommodations and moreover, the Department had to pay a monthly rent of Rs. 70,000 to Rs. 80,000.

“It is important to create a reading atmosphere for them and in view of this, it has been decided to provide separate and spacious rooms, toilets, dining hall and kitchen in all the under-construction hostel buildings,”  she said.

Most of the hostels in rural areas are in our own buildings. But a majority of hostels in the city are located in rented buildings as more students come to urban areas to study. 10 new hostels will be ready by the end of this year and this will take care of student needs. —H.S. Bindya, District Officer, Department of Backward Classes Welfare

Colleges are scheduled to start and as such, hostels must be started to accommodate students. It is difficult to ensure drinking water units, sports ground, library and solar connections in rented buildings. A learning atmosphere needs to be created to improve the quality of learning. —B. Malathi, Joint Director, Department of Social Welfare