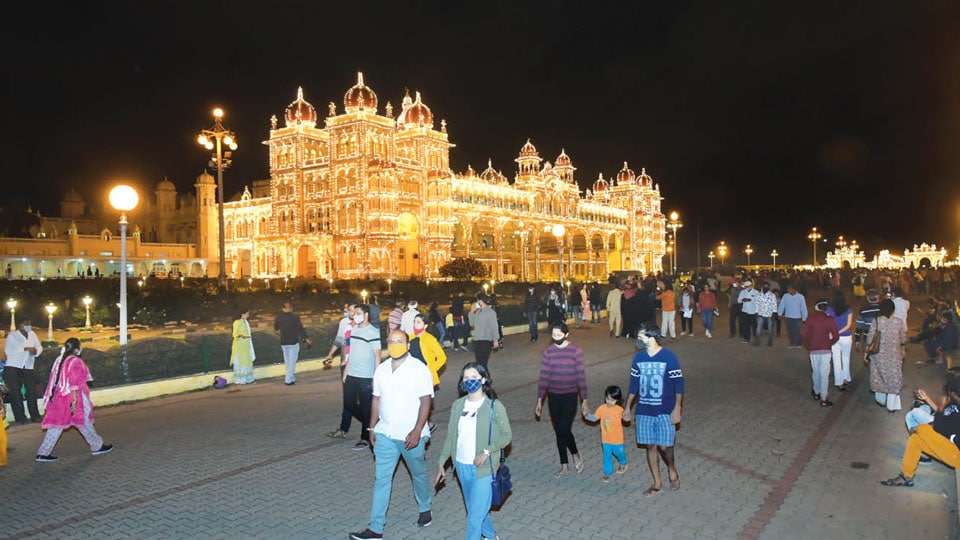 Mysore/Mysuru: Signalling the end of Mysuru’s battle with the second wave of killer COVID-19, the Mysore Palace was illuminated last evening after a gap of three months. With the illumination, the spectacular structure got even more spectacular.

As the illumination event was widely publicised, many thronged the Palace to have a brighter and closer look at the illumination while most of the Mysureans preferred to get onto their terraces and balconies to have breath-taking looks.

The illumination was suspended on April 10 as the lit up Palace attracted thousands of visitors, making the assembly a potential threat in the wake of pandemic. The lights haven’t been switched on since then when COVID second wave struck.

Now as the second wave is nearing its end and the Palace has started attracting tourists, a decision was taken to illuminate the fascinating structure. Yesterday, the lights were switched on at 7 pm and went on till 8 pm. Henceforth, the Palace will be illuminated every  Saturday and Sunday between 7 pm and 8 pm.

The Sound and Light Show will also be resumed from July 26 (today). A statement from the Deputy Director of Palace Board T.S. Subramanya said it will be held from 7 pm to 8 pm from Monday to Friday and from 7 pm to 9.15 pm on Saturdays.

The Palace had been thrown open to the general public from July 5. Public can visit the premises between 10 am and 5.30 pm after purchasing tickets from the counters at the entrance gate or through the official website of Mysore Palace www.mysorepalace.gov.in

Marking the resumption of footfalls to the Palace, over 5,423 tourists visited yesterday while 3,614 people came to see it on Saturday. On July 23, 2,383 people had visited the iconic structure and on July 21, 2,194 tourist footfalls were recorded, taking the total number of visitors to more than 16,000.

However, tourists entering the Palace will have to maintain COVID-19 appropriate behaviour that includes wearing of mask and maintaining social distance.