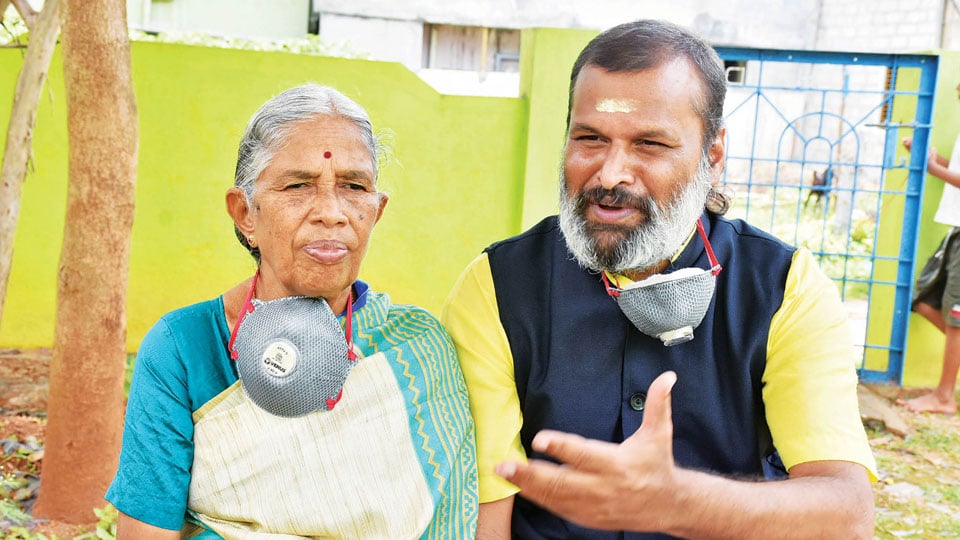 Mysore/Mysuru: After a two-year-eight-month pan-India temple run on a scooter and covering 56,522 kilometres through four countries — Nepal, Bhutan, Bangladesh and Myanmar  — with his 70-year-old mother Choodarathna, city’s Dakshinamurthy Krishna Kumar has returned home in Bogadi yesterday afternoon. The mother and son duo started their journey on Jan. 16, 2018.

While his mother, as per her desire, has seen almost all important temples spread across India and neighbouring countries, Dakshinamurthy Krishna Kumar, once a corporate team leader at a private company in Bengaluru, has become spiritually inclined and wants to spend the rest of his life preaching and guiding the youth in the path of spirituality and nationalism.

Their vehicle, a 2000 model Bajaj Chetak scooter (KA-09 X-6143), gifted by Krishna Kumar’s late father in 2001, will remain as a prized possession as without the vehicle, the duo could not have even imagined their spiritual sojourn. Star of Mysore had published a feature on the mother-son duo on May 28 this year under the title “Man from Mysuru, his mom travel 56,027 kms on a 20-year-old scooter.”

Krishna Kumar, who calls this pilgrimage as Mathru Seva Sankalpa Yatra, will convert his house at Bogadi into a ‘Gnana Vikasa Kendra’ and involve himself in social service, spiritual activities and train the youth in nationalism. “This Akhanda Bharat journey has made me a spiritual person now. I love this beautiful country and would like to dedicate my life to the service of the nation. Today’s youth need guidance and I will associate myself with spiritual and moral organisations and provide the needed guidance to youth,” he told Star of Mysore.

A bachelor, Krishna Kumar plans to remain so. “I cannot rule out the possibility of my second phase of the yatra,” he says, displaying enthusiasm. “Many temples, ashrams and monasteries have taught me the values of Tapasya, Tyaga and Dharma. I am not planning to keep the journey experiences to myself. I want to share with the youth so that they get motivated to serve this great country,” he reveals.

Before starting the journey in January 2018, Krishna Kumar first customised his scooter and made his elderly mother sit pillion in a manner to immunise her from travel fatigue. “We went straight to Chamundeshwari Temple atop the Chamundi Hill and performed a puja before starting our journey. Not even once they had to face any hardship in India or on foreign soil. I experienced a lot of humanity throughout my journey,” he explains.

When asked about the expenses he incurred during the journey, Krishan Kumar says, “I have not calculated the exact amount of money that I have spent for this yatra with my mother. I might have spent nearly Rs. 6 lakh and 80,000 out of my savings.”

It is not easy for an elderly  person to sit on a scooter even up to a short distance. Still, his mother Choodarathna managed to travel 56,522 kilometres on this old two-wheeler. “I did not face any problem as the scoter seat was customised to increase comfort. More than comfort, the quest for spirituality and my strong desire to see famous temples of India has been fulfilled by my son. I am gifted to have such a son,” she says.

Both Krishna Kumar and Choodarathna never faced any health issues throughout their journey. “We only consumed prasadam that is distributed at temples and ashrams and that too only twice a day. We never ate in hotels. This discipline helped us. The only thing we had to do is change tyres of the scooter eight times and fix a couple of punctures,” he reveals.

The incredible story of Dakshinamurthy Krishna Kumar taking his aged mother on a nation-wide pilgrimage on a scooter caught the attention of Anand Mahindra, the Chairman of Mahindra Group who promised to gift a Mahindra KUV 100 NXT. “Very soon, the vehicle will reach Mysuru and I am in touch with Mahindra Company officials,” he says.