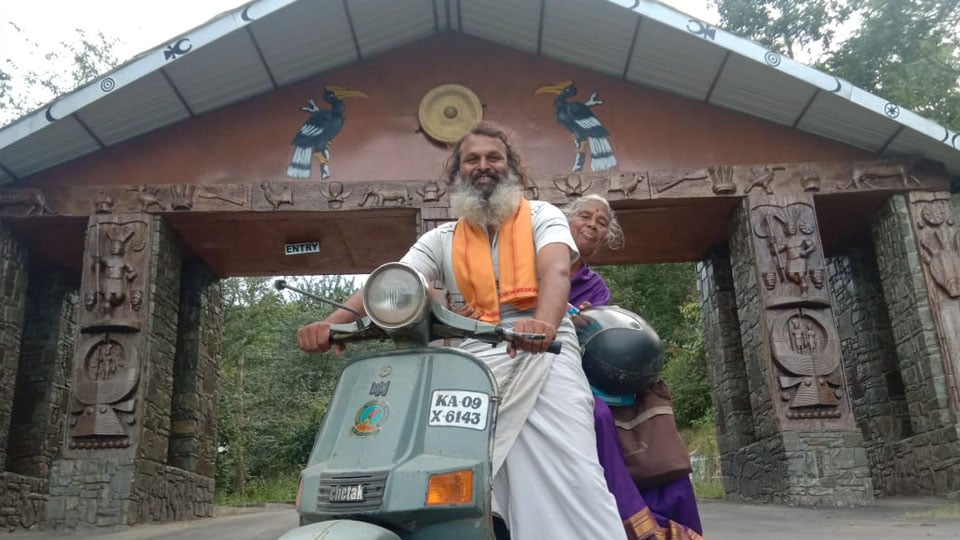 Amid COVID pandemic, they cover 2,600 kms from West Bengal to Karnataka in 7 days

Mysore/Mysuru: Not many who so deeply love their mothers would dare do what Dakshinamurthy Krishna Kumar, a resident of Mysuru, did for his 71-year-old mother Choodarathna. He took her on a pilgrimage – a merry scooter sojourn — sitting pillion on a 20-year-old scooter and has covered countries including Nepal, Bhutan, Bangladesh and Myanmar – a distance of 56,027 kilometres.

They visited all the holy places in India and on foreign land. Krishna Kumar calls his journey along with his mother ‘Mathru Seva Sankalpa Yatra’ which roughly translated to English means a journey to fulfil a mother’s wish. After two years and four months of travelling, both the mother and son have returned to Karnataka and are now staying in the Ramakrishna Ashram at Teggihalli village in Madhugiri taluk.

Not even once his 20-year-old (2000 model) Bajaj Chetak scooter (KA-09 X-6143) break down in the journey that was full of ups and downs, plains and elevated roads. But there were a couple of punctures in the tyres. Krishna was working as a corporate team leader in a private company in Bengaluru and had a handsome salary package.

He quit his job after his mother was lonely following his father’s death and when his mother expressed a desire to see some of the temples in Karnataka, he took her on his scooter to places like Belur and Halebid in Hassan. Thus started his ‘Mathru Seva Sankalpa Yatra’ and both mother and son did not look back, literally. And embarked on a journey covering all the Indian States and reached foreign land too.

The scooter was his father’s gift in 2001 and the vehicle ensured door-to-door travel. Speaking to ‘Star of Mysore’ from the Ramakrishna Ashram in Teggihalli, Krishna Kumar said that he is a changed man now. “I have become spiritually inclined and a patriot too. Many temples inspired me and I want to lead a life of ‘Tapasya’ and ‘Dharma’. Swami Ramanandaji of Teggihalli has accepted me as his disciple and I am indulging in ‘Swa Adhyayana’ which means self-learning without any prejudice or any ulterior motives,” he says.

“We never stayed in any hotels or lodges, instead sought out Mutts, Temples and Dharamshalas to rest our aching bodies. North India is full of them and people were happy to help after learning about our journey. At places where there were no Mutts or temples, we usually consumed fruits and prepared curries out of vegetables that were available to us,” he explained.

On the COVID-19 effect on their journey, Krishna Kumar says, “We were in Samsing Tea Garden in Jalpaiguri of West Bengal when the initial COVID storm came to India and when Prime Minister Narendra Modi announced Janata Curfew on Mar. 22. There are over 283 tea gardens in Northern West Bengal including Jalpaiguri, Alipurduars, Darjeeling Hills and Dooars region. People welcomed us with open arms and we were provided food and shelter,” he revealed.

The mother and son duo was forced by Coronavirus to stay in a single place for nearly one-and-a-half months. “Seeing our plight, Raju Bista, the Darjeeling BJP MP used his good offices to contact West Bengal Chief Minister Mamata Bannerjee and our Karnataka CM B.S. Yediyurappa. After hearing our incredible feat on a scooter, Yediyurappa spoke to me personally and ensured that I get passes in all the States and reach Andhra Pradesh safely. From there, we travelled to Madhugiri and reached Teggihalli Ashram,” he says.

Amidst lockdown and spread of the virus, Choodarathna and Krishna Kumar travelled 2,600 kilometres from Samsing Tea Garden to Madhugiri in 7 days and per day, they covered 200 to 300 kilometres. “We did not face any problem at any check-post and our entry to Karnataka was smooth. All over we met wonderful people and the love showered on us transcended language and cultural barriers. Even on foreign land we got love, food and shelter,” Krishna Kumar says.

No immediate coming back home

On his plans to return to Mysuru, he says that he does not have immediate plans to come back. “I learnt a few important life lessons in the Akhanda Bharat journey which has made me spiritually inclined and a patriot. I love my country more than my life and I want to dedicate my life to the service of the Nation. To engage myself totally in spirituality, I found this Ashram an ideal place. I find a lot of time to read, serve my mother and move towards spirituality. What more does one need,” he retorts.

Krishna Kumar has remained a bachelor to serve his mother and with his new-found love for spirituality, he plans to inspire youth in the coming years with his learning and knowledge. “Indian youth must tread a path of honesty and this is the only way of nation-building. Swami Vivekananda’s and Swami Ramakrishna Paramahamsa’s teachings are very relevant now at a time when we are becoming morally hollow and ethically bankrupt,” he says.

The incredible story of Dakshinamurthy Krishna Kumar had struck a chord with businessman Anand Mahindra who took to Twitter offering a car as a gift to Kumar. “A beautiful story… About the love for a mother but also about the love for a country…” wrote Anand Mahindra. “I’d like to personally gift him a Mahindra KUV 100 NXT so he can drive his mother in a car on their next journey.”

“Yes, Anand Mahindra personally called me and I am in touch with him. In fact, we spoke last week and he asked me to come to Mumbai and take the vehicle which has been reserved in my name. Going to Mumbai is another 4,500 kilometres of travel that looks highly improbable now. Not for the vehicle, he offered to me but I would definitely want to meet him in future. Anand is an inspiration,” Krishna Kumar told ‘SOM’ when asked about Anand’s vehicle offer.