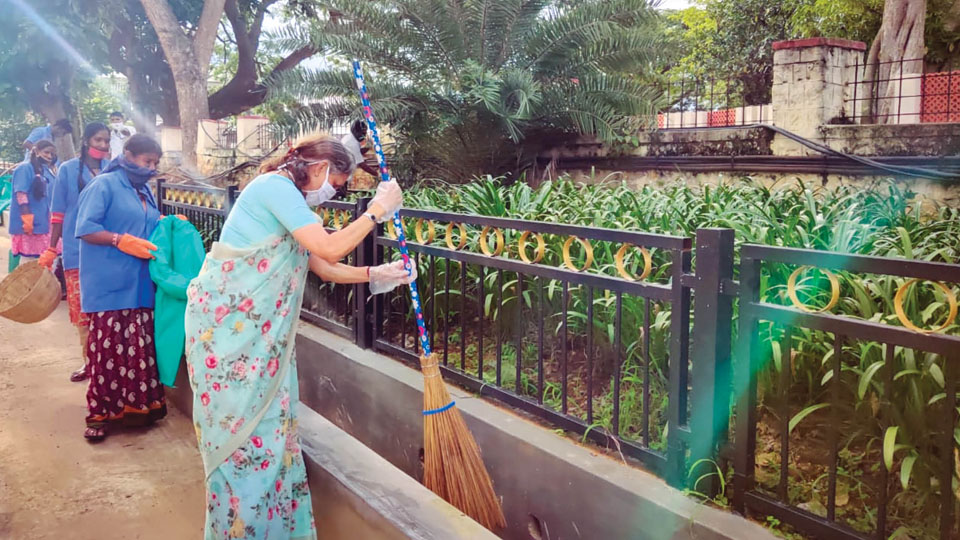 Mysore/Mysuru: In pursuant to the directives of the Ministry of Railways, Swachhta Pakhwada is observed every year  to commemorate the birth anniversary of Mahatma Gandhi. The Mysuru Division of South Western Railway, has organised Swachhta Pakhwada campaign from Sept.16 to Oct. 2 with focus primarily on avoiding single use plastics or reusing/recycling plastic in Railway Offices, onboard trains in the periphery of Railway Stations and to make a visible impact on cleanliness during the period.

On the inaugural day of the campaign held in the premises of Divisional Office in Mysuru, Aparna Garg, Divisional Railway Manager, Mysuru Division, administered the Swachhta Pledge to Railway officers, staff of Divisional Office and Safai Karmacharis.  The oath urges to serve Mother India by keeping the country neat and clean. It also urges to devote 100 hours per year, that is two hours per week to voluntarily work for cleanliness.

Speaking on the occasion, the DRM called upon the Railway staff to internalise the pledge and work earnestly to make Offices and Railway areas clean. A series of cleanliness activities are planned during the period.

K. Krishnaraj, Senior Divisional Environment and Housekeeping Manager, emphasised the significance of eradication of single use plastic and importance of Swachhta in this COVID scenario.

After the pledge, officers and staff participated in Shramdaan in the vicinity of Divisional Office building by removing plastic waste and other garbage.

Additional Divisional Railway Mangers and Senior Officers were present on the occasion.