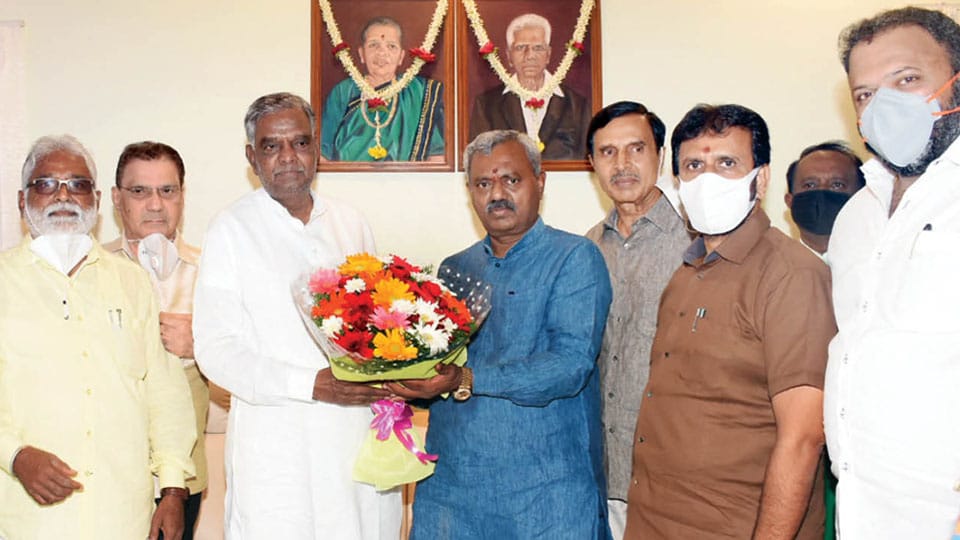 ‘Decision on closing down of tourist spots to be taken tomorrow’

Mysore/Mysuru: Minister S.T. Somashekar, who is the Minister in-Charge for handling flood relief and COVID-19 management in Mysuru and Chamarajanagar districts, visited the residence of Chamarajanagar MP and senior BJP leader V. Sreenivasa Prasad in Jayalakshmipuram here this morning and greeted him on his (Prasad) 75th birthday.

Speaking to press persons on the occasion, Sreenivasa Prasad announced that he would retire from electoral politics. Maintaining  that he had thought of retiring from politics a couple of years ago, he said that the changed political circumstances forced him to contest from Chamarajanagar Lok Sabha seat in the 2019 polls and this was his last electoral battle.

Speaking to press persons after greeting MP V. Sreenivasa Prasad on his 75th birthday, Minister Somashekar said that Sreenivas Prasad’s political journey is a lesson to budding politicians. Pointing out that the guidance of Sreenivasa Prasad was needed for youths, the Minister wished health and happiness for the veteran BJP leader, who turned 75 today.

Book release: A book on the political journey of Sreenivasa Prasad titled ‘Naanu Yedurisida 14 Chunavanegala Avalokana’ (an analysis  of the 14 elections that I fought)’ will be released at a programme to take place at Dr. B.R. Ambedkar Research and Extension Centre in Manasagangothri at 4 pm today by former Minister P.G.R. Scindia. The book is brought out by Samaanathe Prakashana.

Referring to COVID situation in Mysuru district, Minister S.T. Somashekar, who is put in charge of COVID Management and Flood Relief in Mysuru and Chamrajanagar districts, said that with the threat of a possible third wave of the deadly pandemic looming large, a decision on shutting down tourist sports in Mysuru, which are witnessing a heavy flow of tourists following the lifting of lockdown, as a precautionary and safety measure, will be taken tomorrow after holding elaborate consultation and deliberations.

Noting that he has directed the District Administration to give a comprehensive report on COVID situation in the district, he said that he will be holding a meeting in Mysuru tomorrow, where this report will be discussed in detail, following which a decision on whether to shut down tourist spots will be taken.

Asserting that the decision will be taken so as not to affect the citizens, businesses and other commercial activities, Somashekar said that the previous lockdowns have severely hit the economy and this factor will be primarily kept in mind while taking a decision.

Maintaining that a complete shutdown cannot be enforced overnight, he said that the decision will be based on what best can be done to prevent the outbreak of the possible COVID-19 third wave and at the same time not to inconvenience the people.

When asked what portfolio he would like to get, Somashekar said that his first choice was Bengaluru Development. Explaining the reason for his choice, he said that with BBMP elections round the corner, he wanted to gear up the  BJP for the polls and organise the party at booth levels. However, he will be satisfied with the portfolio that the Chief Minister allots him, he added.