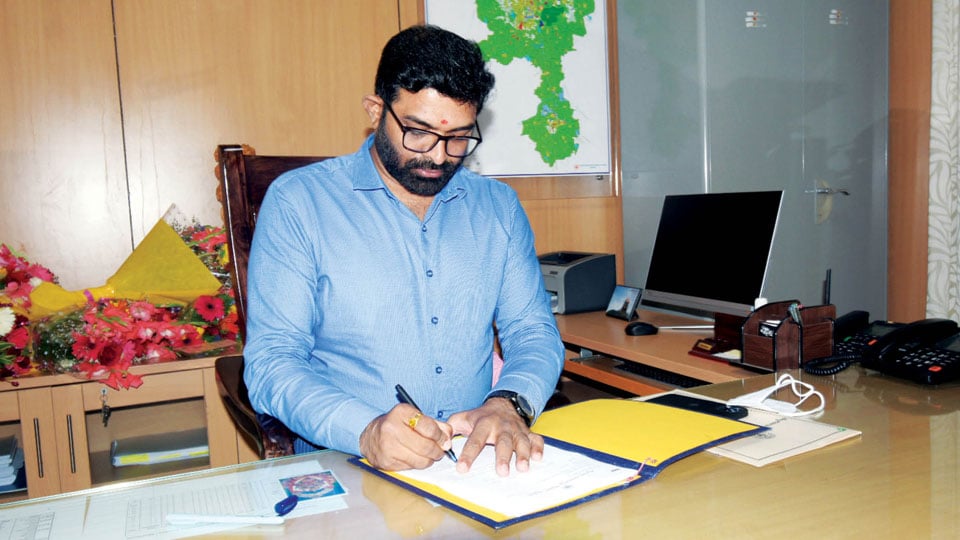 Mysore/Mysuru: Reacting to the startling disclosure made by Urban Development Minister Byrathi Basavaraj that MUDA has over 13,000 unallotted sites and acquired land that extends up to 300 acres worth more than Rs. 5,000 crore, MUDA Commissioner G.T. Dinesh Kumar told SOM this morning that many MUDA lands have been encroached upon by vested interests.

“Yes, the Minister is right. Apart from the mentioned unallotted sites, MUDA has vacant lands, lands that have been encroached upon, lands under Court litigation and lands that have to be earmarked for public amenities but the parties concerned have not followed the rules. All these lands are within the Mysuru city limits itself,” he said.

MUDA has acquired many parcels of land since 20 or 30 years and has left it undeveloped. “Seeing an opportunity here, there are many people who have encroached upon such lands as MUDA has not developed them. Many such cases are pending in the Court of law. Also, on many vacant lands, encroachers have built houses and have even sold the land after fabricating documents. Even such cases are being fought legally,” the Commissioner added.

According to MUDA and Town Planning rules, any layout (government or private) has to have spaces for civic amenities such as parks and open spaces and all of these come under MUDA. “We have found that many private layouts have violated this rule and filled the layouts with construction. The Minister has accounted for such lands too,” Dinesh Kumar noted.

All such lands will be taken over by MUDA and vacant land will be developed and auctioned. “My predecessor (former MUDA Commissioner Dr. D.B. Natesh) had ordered a survey of acquired land and also digitisation of land records. The fact that MUDA owned over 300 acres of vacant land and has 13,000 unallotted sites came to light during that survey. We have now decided not to keep the lands vacant and instead develop them to auction and generate revenue for MUDA. These vacant lands extend from one acre to 10 acres and are sometimes bigger up to 100 acres. We will secure them and auction them for better prices. This will rake in the moolah for MUDA,” the Commissioner added.