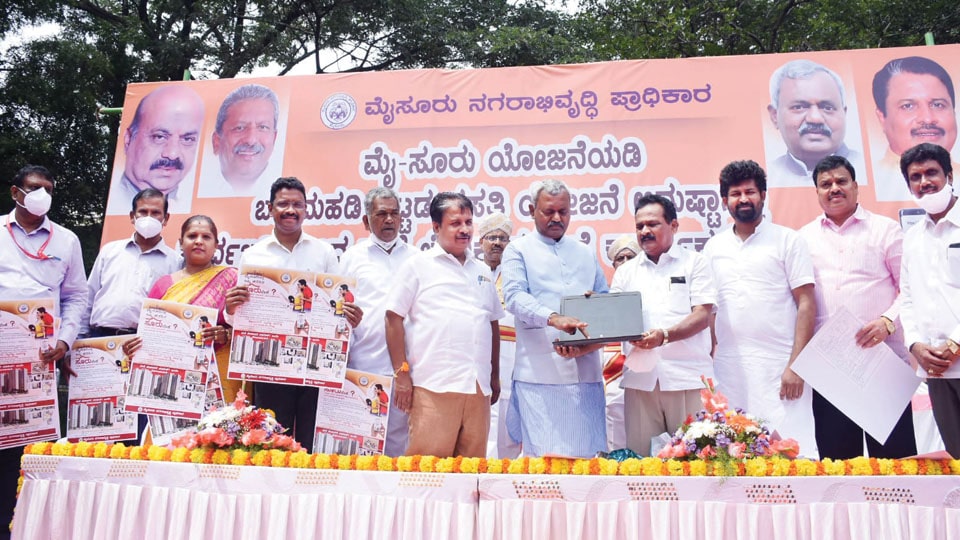 Mysore/Mysuru: The Mysuru Urban Development Authority’s (MUDA) bid to solve the growing land crunch and premium on land value by building group housing projects, where there will be more than 2,000 housing clusters has just got traction with a dedicated app being launched to conduct a demand survey. There is also an offline mode to this.

The survey to be conducted through the app will assess the demand for group housing that will enable MUDA to plan projects. The app ‘mysurumuda’ can be downloaded from the MUDA website ‘mudamysore.gov.in’ and also it will be available in Playstore. The app was launched by Mysuru District Minister S.T.  Somashekar on Wednesday.

However, this is not the first time MUDA is doing a demand survey for the same scheme. Since 2017, many physical surveys have been conducted and this time, the survey will be conducted through an app. There is good demand for the Affordable Group Housing Scheme as thousands of people who want to own a house in Mysuru have already submitted applications when the demand survey was carried out for group housing schemes.

With pressure mounting on MUDA from aspirants who want to own houses here, MUDA has planned to construct over 1,960 houses under this affordable scheme at Vijayanagar First, Second, Third and Fourth Stages, Dattagalli and Sathagalli.

As per the MUDA plans, these housing complexes will have 14 floors worth Rs. 450 crore and will be divided into Economically Weaker Sections (EWS), Higher Income Group (HIG), Middle Income Group (MIG) and Lower Income Group (LIG). They will have one, two and three bedrooms depending on the categories.

Apart from launching the app for a demand survey, MUDA has also called for an offline survey where the applicants can submit applications at ‘group housing drop box’ set up at MUDA Office, DC Office, Mysuru City Corporation Office and also the Tahsildar Office at Nazarbad. The applications must be filled up in the prescribed format and put in the box.