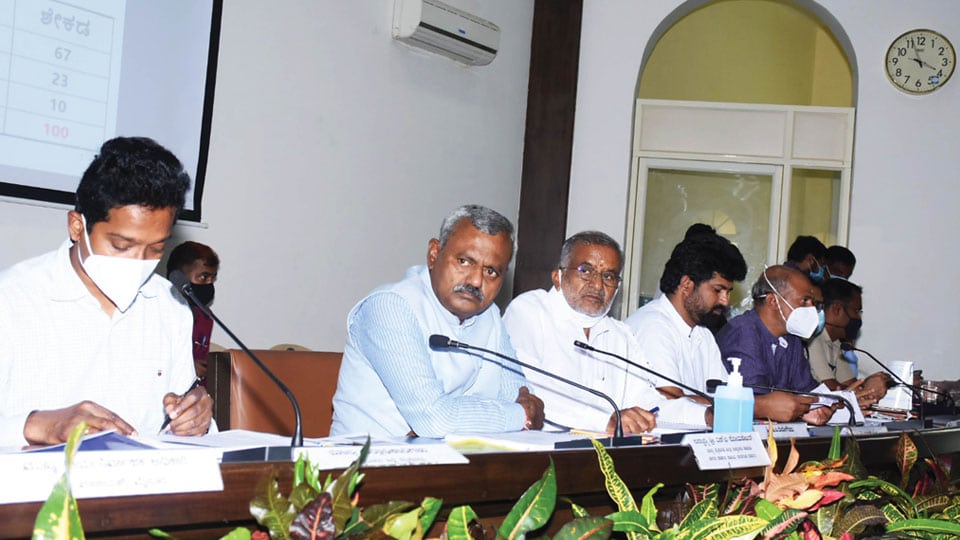 Mysore/Mysuru: With Dasara celebrations just four weeks to go, District Minister S.T. Somashekar said that the District Administration must gear up to vaccinate all citizens of the district for COVID-19, before Dasara.

Asking the officials to ensure that the reported lapses that took place during the outbreak of the COVID pandemic last year and the second wave of attack that struck a few months ago do not recur, Somashekar suggested taking additional measures for preventing any escalation of the pandemic during Dasara festivities.

Deputy  Commissioner Dr. Bagadi Gautham, replying to the Minister, said that the supply of COVID vaccines must be increased in order to meet the target of vaccinating (both first dose and second dose) everyone in the district before Dasara.

Pointing out that the district required 50,000 doses per day in order to meet the vaccination target in the district by Dasara, he said that a proposal has been sent to the Government in this regard.

Minister Somashekar said that the Government will consider the proposal and act on it.

DHO Dr. K.H. Prasad said that all taluks of the district will have Medical Oxygen Generation Plants in the next few days in order to tackle the possible third wave of COVID attack, which is expected to strike in a couple of months. Maintaining that 15 Oxygen Plants are ready for service, he said that all Plants will become operational in a month.

MP Pratap Simha said that Oxygen Plants must also come up in new taluks of Saragur and Saligrama too to meet any medical exigencies in the future.

He also urged the District Administration to distribute Aysuhman Bharat Health Cards to all beneficiaries at the earliest.

Chamundeshwari MLA G.T. Devegowda complained that several villages of Mysuru taluk were lacking in bus services and the problem is now more compounded with the re-opening of schools and colleges.

He also urged the authorities to maintain hygiene in schools and to ensure that classrooms are regularly sanitised in the wake of COVID pandemic.

Nanjangud MLA B. Harshavardhan complained about lack of underground drainages in MUDA formed layout at Nanjangud and took MUDA Commissioner Dr. D.B. Natesh to task for not having visited the locality to take stock of the problems there.

Varuna MLA Dr. Yathindra Siddharamaiah too complained about lack of a proper drainage system, roads and other civic amenities in his constituency, where MUDA is granting permission for formation of layouts.

K.R. Nagar MLA S.R. Mahesh took officials to task for the inordinate delay in the execution of works concerning lift irrigation projects, Jal Jeevan Mission and other schemes. Continuing his tirade against the previous Mysuru DC in this meeting too, he alleged that the previous DC had ordered purchase of cloth bags, much against the K.R. Nagar TMC’s action plan for developmental works. Charging the officials of failing to release funds for his constituency, he lashed out at ADC Dr. Manjunathaswamy accusing him of failing in judicious use of grants meant for repair and rejuvenation works in K.R. Nagar.

Hunsur MLA H.P. Manjunath urged the District Administration to distribute caste certificates to Parivara community members when the Union Government has brought them under ST list. He wanted to know why District Administration was not issuing caste certificates, when Parivara community members are getting the same elsewhere in the country.