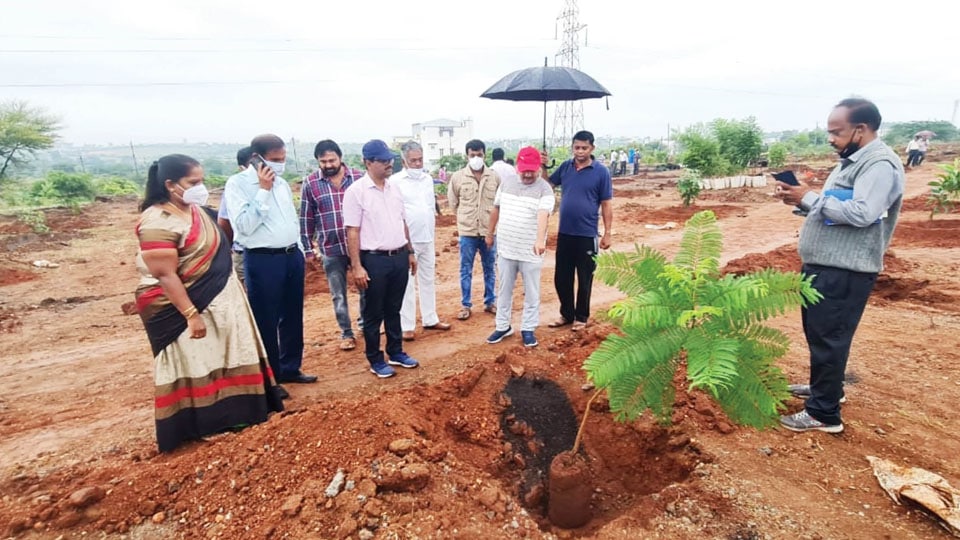 Mysore/Mysuru: The officers and staff of Mysuru Urban Development Authority (MUDA) have revived a Park by planting over 2,500 saplings in the last one week.

A Park has been created on a seven-acre land at Hanchya-Satagalli ‘B’ Zone Layout. This Park, which belongs to MUDA, was in a state of neglect all these years. Now, the entire staff of MUDA led by its Chairman H.V. Rajeev, Commissioner Dr. D.B. Natesh, Superintending Engineer Shankar and Executive Engineer Prabhakar and others, have given a new look for this sprawling Park.

Initially, the entire area was cleaned and the saplings were purchased from the Forest Department nursery and also from Rajahmundry in Andhra Pradesh.

Since last one week, the staff members were spending time at the Park planting the saplings such as teak, jackfruit, mango, honge, sampige, amla, rosewood, guava and other fruit and medicinal plants.

District in-Charge Minister S.T. Somashekar and Urban Development Minister Byrathi Basavaraj were scheduled to visit the Park today during which another 50-100 saplings will be planted.