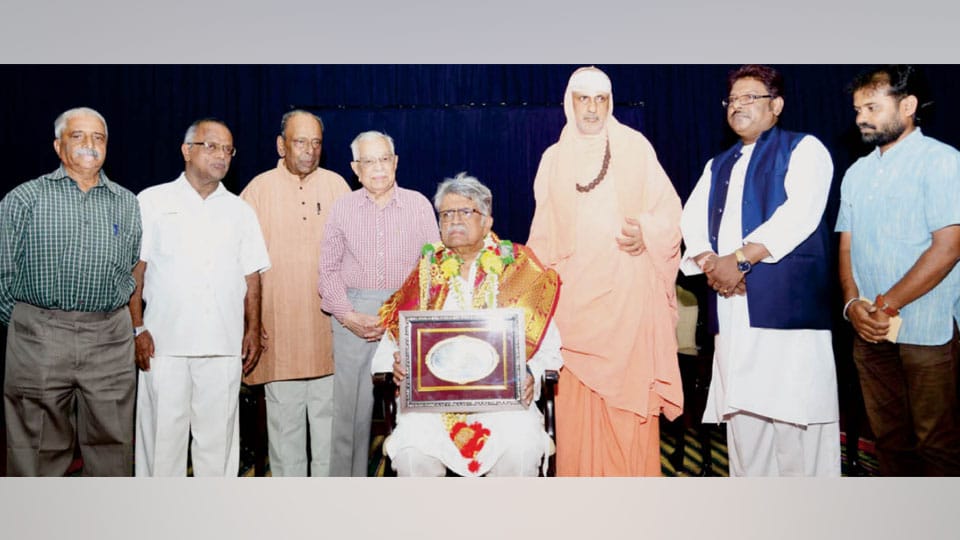 The function was organised on Mar.25 at JSS Women’s College auditorium in Saraswathipuram.

Replying to the felicitation, Pt. Taranath said, “I have been criticising the state of art and culture in Mysuru on several platforms on a number of occasions in the past. This time I am not going to criticise the Mysuru literary circles. That is because in spite of my caustic remarks, they have come together to felicitate me, which I truly appreciate.”

“Earlier, in various public forum, I had said that Mysureans did not have primary knowledge about music. I have also commented that they have not learnt to respect Sarod and Hindustani music. In spite of all these, you have chosen to felicitate me by arranging a felicitation function. I will always be grateful for this honour,” he said.

“The Padma Shri awardee artistes and littérateurs went to Delhi to receive the award from the President. However, I did not go. The reason is, I have received the highest honour than Padma Shri several years ago. That is my Guru Ustad Ali Akbar Khan Saab’s blessings. I am placing all the awards that I have received so far  at the feet of my Guru,” said Pt. Taranath.

Art, culture, music must get pride of place: In our country, art, culture and music is unique to each State and people learn it differently according to the culture of that place. Hence, the emphasis on Hindustani and Karnatak music is different in North and South India. But, in Mysuru both forms of music has grown very well.

“However, the importance that needs to be given to music is not found. Unlike in neighbouring Tamil Nadu, Andhra and Mumbai, where the artistes are revered. This culture must also be developed in Mysuru,” suggested Pt. Taranath.

Veteran Theatre artiste and former Director of All India Institute of Speech and Hearing (AIISH) Dr. N. Ratna said, “Pt. Rajeev Taranath lays equal stress on art and humanism. He has shown a way of life to many students who have trusted him. I can give many such examples myself. It is befitting that such a great artiste has been honoured with Padma Shri.”

Hindustani Singer Ustad Faiyaz Khan said that the achievements of Pt. Taranath cannot be measured in words. He is a tall figure, both figuratively and literally and a guiding light to young artistes. He breathes and lives music even today and has continued the tradition of Guru-Shishya relationship.