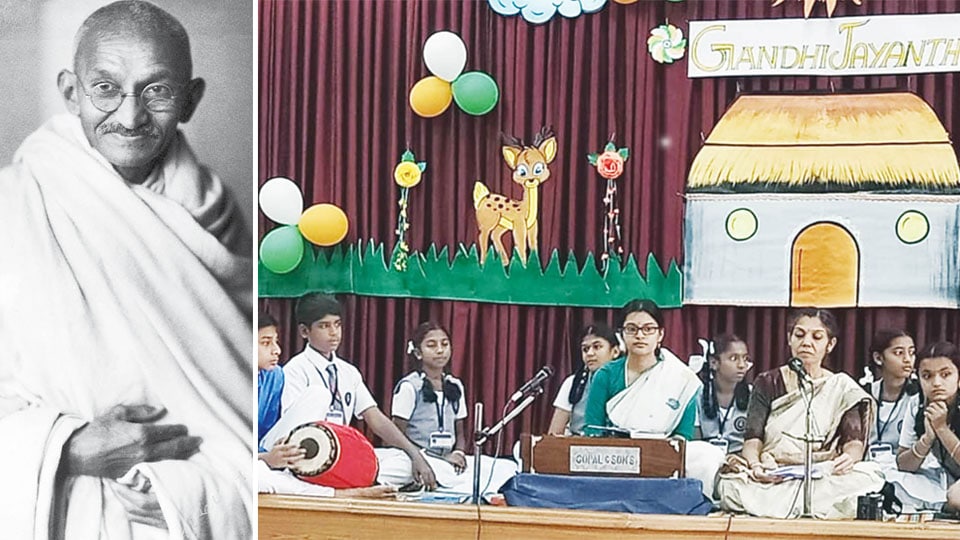 Yesterday, 2nd October 2019 was the 150th birthday of Mahatma Gandhi. We call him ‘Father of the Nation’ because he got us the freedom from British subjugation and taught us many values that we should practice in our personal, family, social, economical and political life. No wonder, when he was asked by a foreign journalist, “what was his message to his people?”, his instant answer was, “My life is my message”.

I am a passionate admirer of Bharatiya Vidya Bhavan (BVB) ever since I studied journalism in its institution at Mumbai in the 60s. So when its Mysuru Chapter was started I got associated with it from day one and at present I am the Vice-Chairman of BVB Mysuru. Its activities and publications resonate both Indian Civilisation and Hindu religion with the emphasis on tolerance and acceptance as expounded by its founder Dr. K.M. Munshi, reverentially called “Kulapathi”, just as M.K. Gandhi is called “Mahatma”.

BVB Mysuru Chapter runs a school in Vijayanagar First Stage and I, as in the past, attended the celebration of       “Gandhi Jayanti” by our students. As we know Gandhiji was very fond of Bhajans and his prayer meetings wouldn’t be complete without a Bhajan. It was, therefore, expected to have some Gandhiji’s favourite Bhajans rendered. And it was so. His favourites and also  mine, “Vaishnava Janato…” and “Raghupati Raghav Raja Ram Patita Pavan Sitaram, Ishwar Allah Tero Nam Sabako Sanmati De Bhagawan…” were sung.

As I heard these two Bhajans rendered mellifluously by Shampa Sharma, a Bengali and Girija Rajkumar, Mysuru, both teachers in BVB School, three thoughts crossed my mind. One was about Gandhiji’s extreme love and compassion for humanity transcending all of kinds of barriers — Geographical, Racial and Religion. Second was his love for Lord Rama as a divine Avatar and protector of the mankind. No wonder, even as he was assassinated at the age of 78 years on Jan. 30th 1948 and the assassin’s bullets pierced his fragile body,  his last breath uttered the words ‘Hey Ram’.

In fact, when the Supreme Court, at long lost, decided to decide on the Ram Janmabhoomi dispute case taking a two-pronged approach of Mediation and the Court, I thought, Ram Mandir for Gandhiji’s favourite divinity would be ready for his 150th birthday. Sadly, it did not happen. Reason, of course, is not far to seek. If only those whom he loved… Perish the thought.

The third thought that crossed my mind was about Gandhiji’s staunch support to ‘Khilafat Movement’ in India despite reservation by a large section of Indians. It was a pan Islamic force that emerged in 1919, after World War I, in order to save and salvage the Ottoman Caliphate (in Turkey) as a symbol of unity among Muslim community in India during the British Raj. Wonder, if a Ram Mandir at Ayodhya could not also be a symbol of unity among Hindus after 72 years of Independence? Yes under Modi Raj?! Let it be.

Anyway, much as Gandhiji might have thought that supporting Khilafat Movement would help in India’s freedom struggle by getting total Muslim support, it did not happen that way. Instead it had, in a subtle way, helped division of India. And now after Pakistan was isolated internationally at the UNGA, the idea of reviving Caliphate seems to have surfaced under a new name — Islamic Renaissance. Turkish President Erdogan had said that                                                          solidarity among Turkey, Malaysia and Pakistan “is necessary for the unity of the Islamic World”. Against whom? No prize for guessing.

Be that as it may, I am left wondering, like many, why was it that we Indians in a free India could not tolerate Gandhiji even for 6 months nor protect him from an assassin’s bullet when British kept him and protected him for 60 years under grave provocation. Destiny?

Whatever might be Gandhiji’s fads and foibles, even eccentricities and idiosyncrasies (of them there are many) there is absolutely not even an iota of doubt in my mind, from what little I have read about him, that he is the most sincere and honest person with an intellect as sharp as a razor’s edge. Like Dadagiri, his Gandhigiri worked well in taming the mighty imperialist British. His Brahmastras were non-violence, non-cooperation and civil disobedience — Satyagraha. It worked.

I always remember Gandhiji’s words about seven social sins he has warned us about whenever I see our politicians, bureaucrats and business tycoons in jail. These seven social sins according to Mahatma Gandhi are:

1. Politics with out principles.

Are we following these precepts of Mahatma? Let us introspect on his 150th birthday. As for me, I had personally paid my tribute to this mighty soul the day following his death by tonsuring my head as a mark of grieving at the Gurukul Ashram in Kengeri where I was. If there is anyone among my readers who has likewise tonsured his head please let me know.

13 COMMENTS ON THIS POST To “Musings on Gandhi Jayanti”