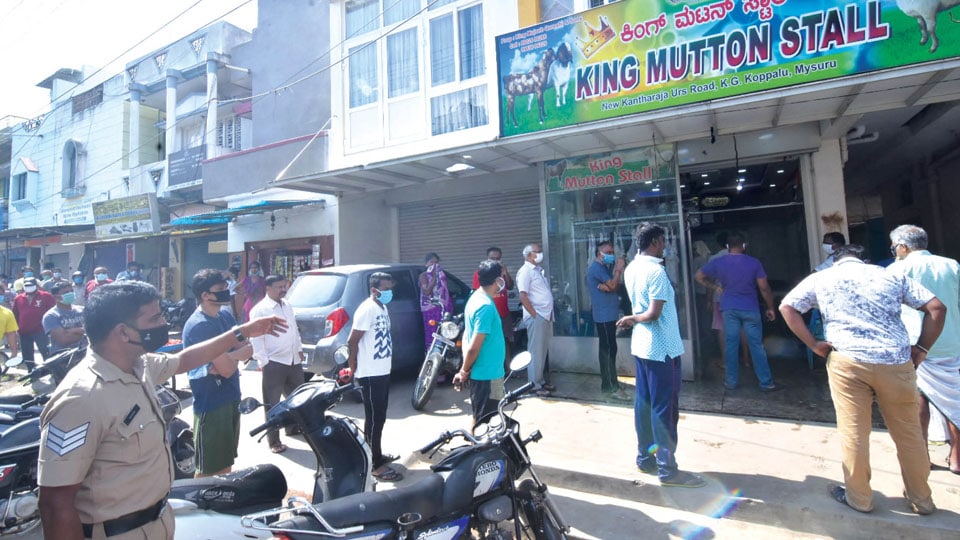 While most shops ensured that customers maintained social distancing, the Police had to do the job in some shops where there were complaints of violation.

There was heavy rush  at all mutton stalls in K.G. Koppal, which is said to have the most number of meat shops other than the mutton market in city and sellers had a hard time in managing the customers, with queues growing by the hour.

Although the authorities have  capped the mutton price at Rs. 500 a kg, some shops were found selling at Rs. 600 to Rs. 650 a kg. The police and the authorities upon coming to know of it, visited the shops for a check, when the shop owners expressed their plight that the purchase cost of mutton was high and as such they cannot sell at the stipulated price (Rs. 500). But as the officials insisted on maintaining the capped price, some mutton sellers abruptly shut down their shops, citing losses, it is learnt.

Meanwhile,  chicken shops too are doing a roaring business today with people thronging them since early morning. However, the shop owners were seen ensuring that social distancing was maintained by customers.The price of broiler chicken in most shops was found to be Rs.150 a kg today. It may be recalled that  the price of chicken meat had nosedived to less than Rs.100 a kg just a month ago following Bird Flu scare, which had led the authorities to order a ban on sale of chicken meat. Chicken shops re-opened only last week after the ban was revoked by the authorities.