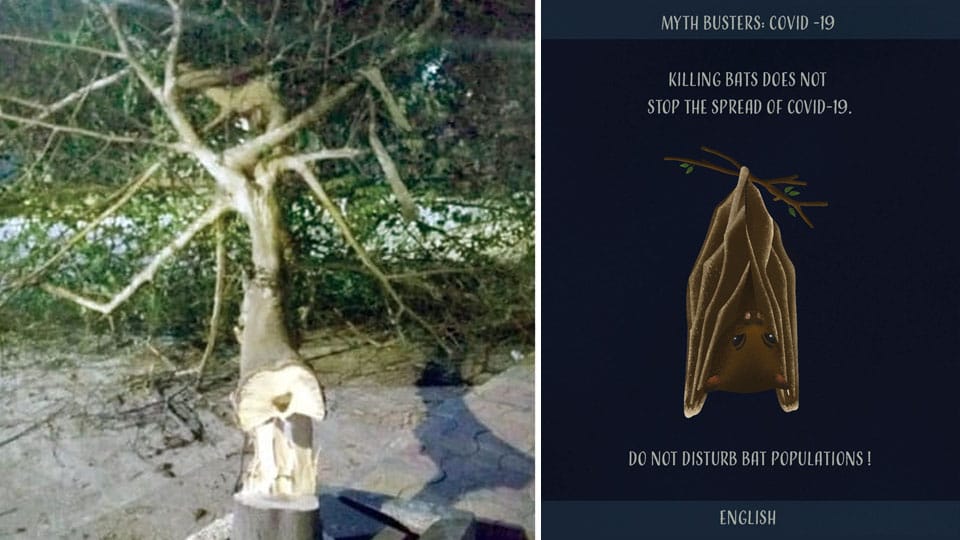 Mysore/Mysuru: A series of ‘Myth-Busters: COVID-19’ posters is doing rounds in social media spreading awareness and myths about pet dogs, cats and bats. This comes in the wake of misinformation being spread that bats, dogs and cats could spread Coronavirus.

Also, trees that are populated by bats are being chopped off. Falling for the misinformation campaign, pet owners are abandoning their pets in some cases.

These beautifully designed posters convey messages like ‘Cats and dogs are not known to spread COVID-19, take care of your pets and do not abandon them,’ ‘Killing bats does not stop the spread of COVID-19, don’t disturb bat population.’ The messages are widely circulated in social media and have been designed in various languages including Hindi, Kannada, Telugu, Tamil, Marathi, Bengali, Spanish, Portuguese, French, German, Italian and Dutch. These artworks have been created by Hyderabad-based Pooja’s Laboratory. The artworks were possible through a team of translators and artists who are helping with the project.

A misinformation campaign that bats could spread Novel Coronavirus led to felling of two fruit-bearing trees on Ramanuja Road at Agrahara in Mysuru. The incident occurred last Wednesday and the two Singapore Cherry Trees were a haven for fruit-eating bats. This chopping of trees based on rumours has upset environmentalists who have brought the issue to the notice of the Forest Department that has asked the field staff not to permit chopping of trees on such grounds.

“As it is, Mysuru is facing a severe shortage of fruit-bearing trees. Earlier, the city was planned in such a way that humans and nature could live in harmony co-existing with animals and birds. But in the name of development and such baseless theories, trees are being chopped. Today they have cut two trees on Ramanuja Road. Tomorrow, it might be in the surroundings of Kukkarahalli Lake,” said S. Shylajesha, an environmental activist.

He said the Singapore Cherry Trees had a good canopy and fruit-eating bats used to frequent and roost there to forage on the cherries. “Earlier, a lot of localities in Mysuru had such fruit-bearing trees and bats used to feed on fruits and some were insectivorous that feed on insects and mosquitoes. If we go on chopping such trees falling prey to misinformation and myths, where is the principle of co-existence,” asked D.H. Tanuja, another green activist and an avid bird-watcher in city.

Zoologist Pradeep Mohan, veterinarian Dr. Manohar Upadhya and Dr. Abhijith A.P.C. who have conducted extensive research on bats have clarified that it is true that bats are carriers of lots of viruses but they do not transmit them to human beings easily.

Viruses that are extremely similar to the one that causes COVID-19 have been seen in Chinese Horseshoe Bats. When a bat is stressed ­— by being hunted, or having its habitat damaged by deforestation — its immune system is challenged and finds it harder to cope with pathogens that are present inside its body. This causes infections to increase and the bats excrete the viruses. This is their way of keeping  their bodies safe.

What happened in Wuhan?

In the epicentre of the Coronavirus — the wet-markets of Wuhan, China — where wild animals, dogs, bats, pangolins, turtles and snakes are held captive together and sold as delicacies, a terrifying mix of viruses and species have occurred and the humans with close proximity have been infected, they explained.

The stressed out bats have infected another animals at the market and in turn, infecting humans. Researchers have suggested the bats could have infected a snake, a turtle or a pangolin, they reasoned.

“Trees should not be felled merely because they attract bats. There are 13 species of commonly found bats in Mysuru and a majority of them are fruit-eating bats. Going by the same logic, one has to axe all the fruit-bearing trees as well across the city. Should we chop off our heads if we have a headache,” they questioned