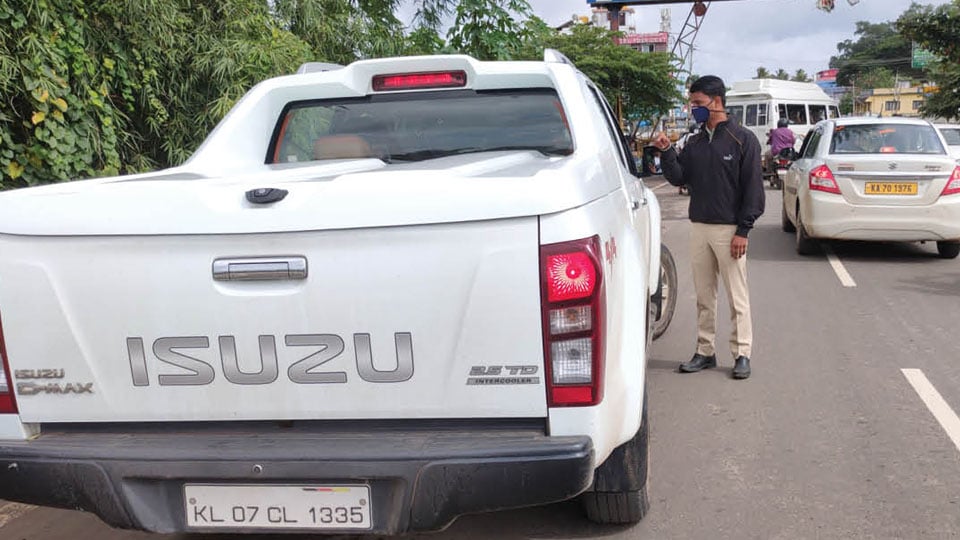 Mysuru/Kushalnagar: The Government order to step up vigil along the Kerala-Karnataka border and making RT-PCR negative certificate (not older than 72 hours irrespective of the vaccination status) mandatory to all those who come from the neighbouring State notwithstanding, travellers are still entering Karnataka making use of certain loopholes in the system.

Kodagu District Health Officer Dr. Mohan Kumar told Star of Mysore this morning that Health Department staff would be deployed at all the borders from tomorrow to conduct the tests. Staff manning the check-posts now include from the Forest and Revenue Department, he added.

These officers only question the occupants of the vehicles that bear registration numbers of Kerala (KL) or Maharashtra (MH). Using this loophole, most of the travellers entering Kodagu are using vehicles that sport number plates from Karnataka.

They park their own vehicles in front of resorts and hotels that are outside the district borders and hire local vehicles and taxis to enter Kodagu to finish their work and return. The personnel at the borders rarely check local vehicles.

Some taxi drivers in Kushalnagar and Madikeri confided that ever since the Karnataka Government began insisting on negative RT-PCR certificates, their business has increased. “Travellers from Kerala bring their vehicles up to Bengaluru and park them in front of their lodges and resorts. As there is no restriction to enter Bengaluru, no one questions their presence. They then come to Mysuru and Kodagu using Karnataka-registered (KA) vehicles and also taxis,” said a taxi driver who did not want to be identified.

Hotels, resorts and lodges beyond the border gates too readily accept visitors and even enable people from the neighbouring State to book a local taxi so that their visit remains incognito, said sources.

Meanwhile, in a fresh set of orders, the Karnataka State Government has yesterday issued special surveillance measures for arrivals from Kerala and Maharashtra. The revised guidelines, according to a circular issued by Jawaid Akhtar, Additional Chief Secretary to Government, Department of Health and Family Welfare, are as follows:

In dire emergency situations (death in the family, medical treatment etc.), the passenger’s swab shall be collected on arrival in Karnataka with necessary details like phone number, address etc., duly verifying from his ID card. On receipt of the RT-PCR test report, further action will be taken as per the State protocol.

2 COMMENTS ON THIS POST To “Only Kerala-registered vehicles checked”