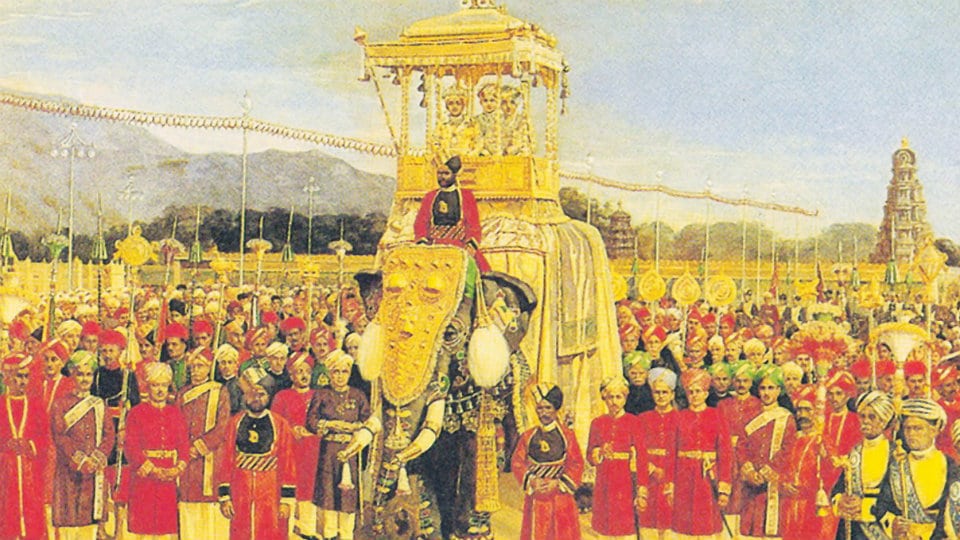 Mysore Gazetteer describes Dasara as an echo from distant past

Mysuru:  A tradition whose origins are lost in time, the Mysuru Dasara has, over the centuries, followed the template conceived by the Vijayanagar emperors (14th century AD to 17th century AD). This is also among the better documented traditions as evident in the writings of the medieval travellers, who visited the courts of the Vijayanagar rulers, some of whom have left detailed accounts.

Travellers like Abdur Razzak of Persia, Domingo Paes and Fernao Nuniz visited the Vijayanagar empire to leave behind a mass of literature and there are references to the “great feast that takes place for 9 days” during September in the writings of Paes, who is reckoned to have visited the kingdom in the early 16th century AD and by some accounts, wrote around 1520-22, about the contemporary ruler of the “kingdom of Bisnaga” (for Vijayanagar).

Paes’ writings touch upon the celebrations at the Palace with complete description of wrestling, sacrifices, dancing girls and singers occupying the stage, the king placating the learned men and Brahmins etc.

An interesting observation is that the nobles enter with horses, elephants, salute the king and then after they have seated, the wrestling match commences.

Perhaps, it is the only reference to “Vajra Mushti Kalaga” that is still enacted in the Mysore Palace during Vijayadashami and Paes observes that this form of wrestling is unlike what is popular elsewhere and entails inflicting blows “so severe as to break teeth and put out eyes.”

The reference to the “triumphal cars” vaguely corresponds to the floats, but the review of forces is well-documented. The soldiers stand in line each according to his rank, according to Paes who goes on to describe the caparisoned horses and the cavalry men, of the elephants which “in the same way are covered with painted faces.”

The Wadiyars, who inherited the custom and the legacy, continued to observe Dasara starting with Raja Wadiyar in 1610 AD at Srirangapatna.

Fast forward to the 19th century and the description of festival in the Mysore Gazetteer of Hayavadhana Rao seem to be an echo from a distant past though with changes reflective of the contemporary period.

The murals at the Kalyana Mantapa in the Mysore Palace capture the visual grandeur of Dasara, which reached its peak during the period of Nalwadi Krishnaraja Wadiyar (1902-1940) and is followed to this day with due modifications reflecting the changing times.