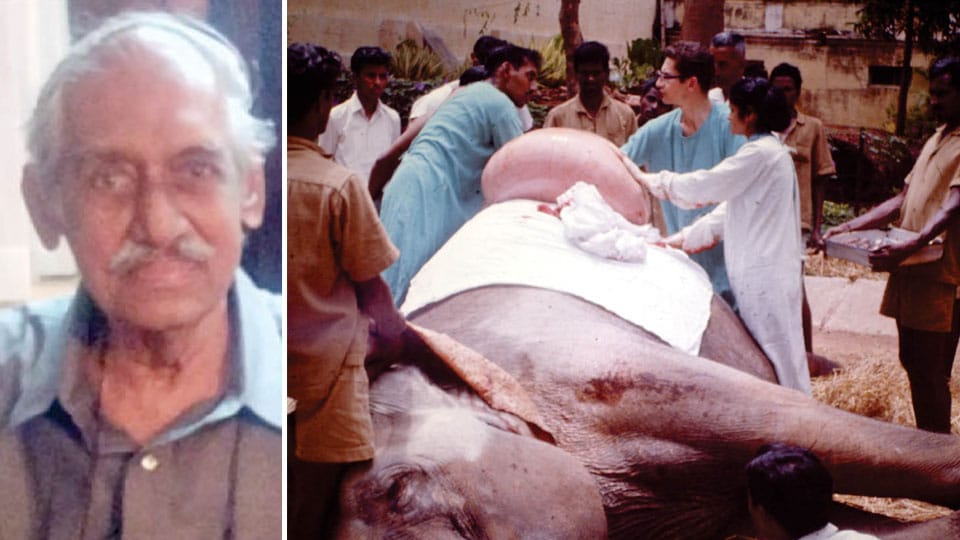 It was almost fifty years ago, in May 1970, that a marathon seven-hour-long caesarean operation, stated to be the first-of-its kind in the elephant world, was performed at the Mysore Zoo to extricate a dead calf or foetus.  This is a memory that has not faded from the minds of most Mysureans of that era.

After all, this was a medical feat almost as great as human heart transplantation, as two eminent surgeons of Holdsworth Memorial Hospital (popularly called Mission Hospital), Dr. John D. Iswariah and Dr. Geofrey Bird had to perform an unusual operation in an unfamiliar environment.

Recalling this operation on an elephant performed at the Mysore Zoo with Star of Mysore, the tall, lanky Dr. Iswariah, in his late eighties now, sitting in the charming old neighbourhood house in Chennai, where he has retired after his 18-year stint at the Mission Hospital, said, “The well-domesticated elephant ‘Padmavathi’ was pregnant and could not deliver. The veterinary doctors tried to remove the calf but were not successful. The Zoo authorities then  contacted Taxidermist Van Ingen who contacted us. Dr. Bird and I readily agreed to do the operation.”

Dr. Iswariah had worked in the Mission Hospital first in 1963 and then gone for a research fellowship to America where he worked in two hospitals — St. Lake’s Hospital, part of the Columbia University, for two years and at Memorial Sloane Kettering in New York for another two years, returned in 1967 to become the Medical Superintendent, taking over from Dr. Frank Tovey, who was the acting Superintendent.

Asked how it was possible for his team to operate on an animal when they had no experience, he said, “During my research in America I had worked on rabbits where the vein is in the ear. But in elephant you can’t find veins. Fortunately, Dr. Dorothy Robb of the Redfern Mission Hospital, Hassan, was in Mysore who lent a hand in keeping the elephant anaesthetised.”

Going back a little, Dr. Iswariah said that ‘Padmavathi’ who had completed the normal gestation period of eighteen-and-a-half months, developed labour pains and she appeared to be suffering from excruciating pain causing great anxiety to Zoo Curator Krishne Gowda and Veterinary Officer Sankaranarayan of the Zoo.

“We decided upon the caesarean as the only possible chance of saving the animal. We started the operation at 10 am in the Mysore Zoo on the side of the abdomen, with our team that included a theatre nurse, Dr. Dorothy Robb, Dr. Bird’s wife Beris Bird with a camera and even a friend of Krishne Gowda from Rekha Studio also brought his camera. ‘Padmavathi’ was given 34 grams of pentathol, over four bottles of ether, one bottle of chloroform and 11 bottles of intravenous fluid,” he said.

“We supplemented the surgical instruments usually used for such an operation on human beings with hatchet, hooks, ropes, bamboo poles and larger knives. We also had a cobbler’s knife. In the we had a shoe-shop where shoes were being made for deformed feet. Hence, we could get the cobbler’s knife. Both Dr. Bird and I began the operation around 10 in the Zoo,” he said.

The first problem the doctors faced, according to a report in Deccan Herald by the late journalist Krishna Vattam was, when the animal fell down on the wrong side, rendering the operation more complicated. An incision nearly three-foot long was made in the abdomen.

“We had to extract the calf but it was the back of the calf and not the feet showing. How do you get to one of the legs was the problem as it was very difficult trying to locate a foot to flip the foetus around,” said Dr. Iswariah.

According to the report, the five-foot four-inch Dr. Bird had to enter the womb of the animal shoulder deep to remove the dead foetus by means of a rope. It was a herculean task indeed to remove the male calf three-feet long and 2.5 feet tall and weighing about 300 pounds.

“Unfortunately Padmavathi’s uterus struggle had gone on for 36 hours. There was infection as gas bubble had formed. She survived the night and next morning she died of trauma,” he said.

“It was a most depressing news for Dr. John Iswariah and Dr. Geoffrey Bird who had performed the unprecedented marathon seven-hour operation with a missionary zeal to save the animal,” records Vattam.

“We were really sad that we could not save Padmavathi after all the marathon operation,” said Dr. Iswariah with a tinge of sadness even after all these years. However, Krishne Gowda had noted — the last stitch was fastened at 17:00 hours and after the operation Padmavathi appeared normal. However, she survived only 19 hours.

This narration rekindled another of Dr. Ishwariah’s memory and he shared the experience of saving crocodiles.

“Two young crocodiles which had swallowed fishing hooks were brought to our hospital.  I was told that due to floods in Lakshmanatheertha river, the officials of the Fisheries Department had put out fishing lines with hooks. The lines felt heavy as they were being pulled out and to their surprise, the officials found two young crocodiles on the lines. By this time my daughter Dr. Vasanthi, who had become a Veterinarian, was handling crocodiles in Mysore Zoo. She telephoned me and brought the reptiles to the hospital. We operated on them. While one died the other survived and lived for long in the Zoo,” he recalls.

Dr. Ishwariah’s tryst with animals continued as the hospital was involved with an Orangutan also. “The Mysore Zoo had two Orangutan (the smaller variety). They developed Polio (Poliomyelitis infection-confirmed at the CMC Vellore Hospital by the samples sent to them). The male Subba escaped complication but Subbi, the female suffered consequences of such an infection, as we see in the human,” he said.

Continuing he said, “It had paralysis of the lower limbs, weakness of the back and neck muscles resulting in inability to sit or hold up her head. We commenced a daily regimen of physiotherapy. The muscles were massaged, the joints put through full range of movement to prevent contracture. Eventually Subbi was able to “progress” by rolling from one place to another, sit up with help (later on her own), hold up her head and feed herself but was never able to stand or walk, even with help. The keeper, who brought her to the hospital, carried her on his hip, in the manner of an Indian woman carrying her child. In due course Subbi conceived and delivered a baby which died soon after birth.”

Thus ended our more than one-hour-long conversation, even as his wife Padmini Ishwariah, who is equally well-known to of students at Ideal Jawa Rotary School, as she taught music and English, fondly recalled their times in Mysore, before I bid goodbye to them at their Chennai abode.

Writing about the bull Swethavarna, who was acquired by the Zoo in 1951 and its mating with Padmavathi that went on for years, he said about the last pregnancy of Padmavathi, “In the early hours of May 29, 1970, Padmavathi was seen to be restless and was in labour. Gradually labour progressed accompanied by micturition. As by 15:00 hours she had still not given birth, efforts were made to establish the presentation of the calf per vagina. However, only the trunk of the calf could be felt when examined, and its head could not be reached. All efforts to remove the calf through normal genital passage failed though Padmavathi was making valiant efforts.”