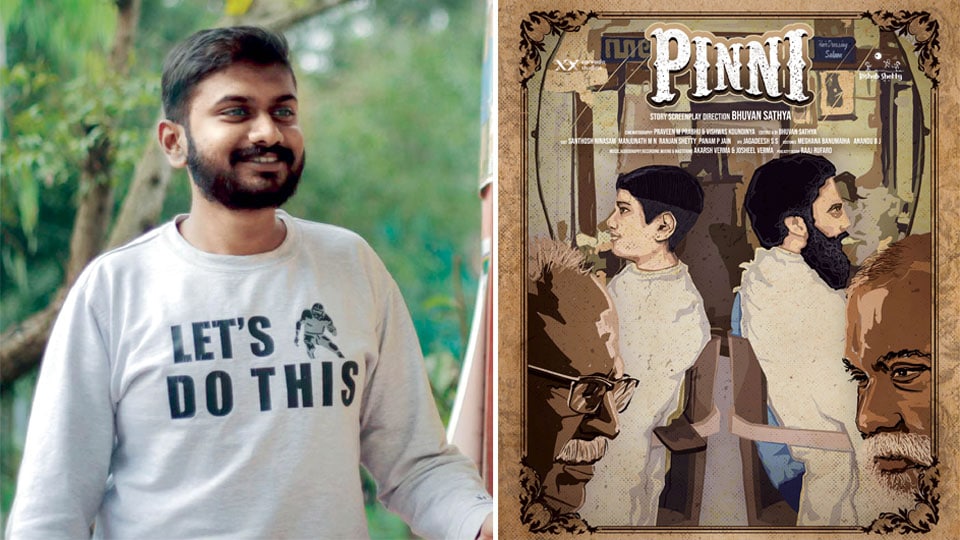 There is one section of people who have dedicated their life for the film industry by choosing to tread the path no matter what and achieved great feats while there is another section of art-lovers who dream to take up their passion but fail to do so due to varied reasons but keep striving hard to realise their dream some day.

We have seen people from various other professions painting their passion by choosing to be part of movie- making, be it on-screen or off-screen, over their highly-paid salaries.

Adding to the list is Bhuvan Sathya from our own heritage city, who quit Engineering profession, to make his dreams come true. Mysureans have contributed immensely for the growth of Kannada film industry. Now, Bhuvan is another young talent blooming in the field of movie-making.

Bringing forth his creativity is his short-film titled Pinni which has been chosen to be premiered at the prestigious New York Indian Film Festival (NYIFF) – 2021 and has the credit of being the only Kannada short-film to be part of the Festival. Apart from this, three feature films in Kannada — Prithvi Konanur’s Pinki Elli?, Ganesh Hegde’s Neeli Hakki and Abhilash Shetty’s Koli Taal — have got the honour of being part of the NYIFF which is being streamed virtually on MovieSaints from June 4 and will conclude on June 13. To watch Pinni, log on to: https://nyiff.moviesaints.com/movie/pinni

Bhuvan Sathya, who declined well-paid job offer after his graduation (Mechanical Engineering) from SJCE Mysuru to pursue his passion of Movie Direction, has  done five short-films (Pinni being the 5th one), eight Ads and one music video till now.

Speaking about his passion, he says: “I had started directing plays and short movies during my graduation days. My inspiration for doing short movies was to help people build their own opinion and perspective on existing social issues in the society, therefore all short movies at beginning of my career was social drama and was kept open ended because I always believed giving definitive conclusion for movies would enforce my perspective, rather I wanted to help audience find their own.”

When asked about his short movie Pinni being selected to NYIFF, he said: “An experimental short-film called Being a Man where a transgender stands up against women harassment, won me 1st place at Mysuru Dasara Film Festival in 2019. It’s been a challenging and exciting journey of two years from Mysuru Dasara Film Festival to New York Indian Film Festival (NYIFF). Pinni is definitely a proud moment for Kannada cinema since it’s being world premiered at NYIFF. It has also got special mention award for its unique treatment from 11th Dada Saheb Phalke Film Festival held in April this year.”

Speaking about the 20-minute short movie and its storyline, Bhuvan explains, “Idea for Pinni originated when I quit my job to pursue my offbeat passion of film direction. As my father was a Government employee and had frequent transfers, I stayed with my grandparents in Mysuru and did my schooling at VVS Pandit Nehru High School, PUC at Gurukula PU College and Mechanical Engineering at SJCE. After completing my Engineering, I had frequent conflict with my grandfather regarding quitting regular safe job which created a feeling of insecurity and confusion that I experienced inside myself at that phase which had taken my peace away and writing Pinni story was the process of me finding answer to my life and making peace with it.”

Talking about the making of Pinni, the young film-maker says: “This project took me two years and I had to face many hurdles like writers block, financial setbacks and even with location scouting, since the film is majorly shot in a building which is more than 80 years old, to capture the essence of old Mysore and give justice to the nostalgic scenes of the movie. Finding those buildings and convincing them to rent for my budget was one of the tedious task which took one year of film-making process. So in this time of location scouting, I learnt editing and colour grading since I knew I couldn’t afford one which made me proficient about post production process. Even after 1st schedule, I had to take one month break to adjust money for shooting. Not from a film background, no prior experience of assisting anyone or any formal film education, making short movies and watching YouTube videos has been my main source of learning. Directing a child of 8 years to a senior actor of 68 years was a great learning task.”

“Due to budget constraints, I have done six department works alone like production,writing,direction, editing, DI and art direction. Thinking in 6 directions at a time was a challenging task on set,” he adds.

Pinni has opened many new doors for me and has given me an opportunity to work as an Assistant Director for Hemanth M. Rao’s next movie Sapta Sagaradaache Yello with Rakshith Shetty as lead. Prominent Kannada Film Director Rishab Shetty has agreed to present the short film under his banner and promote it, informed Bhuvan.