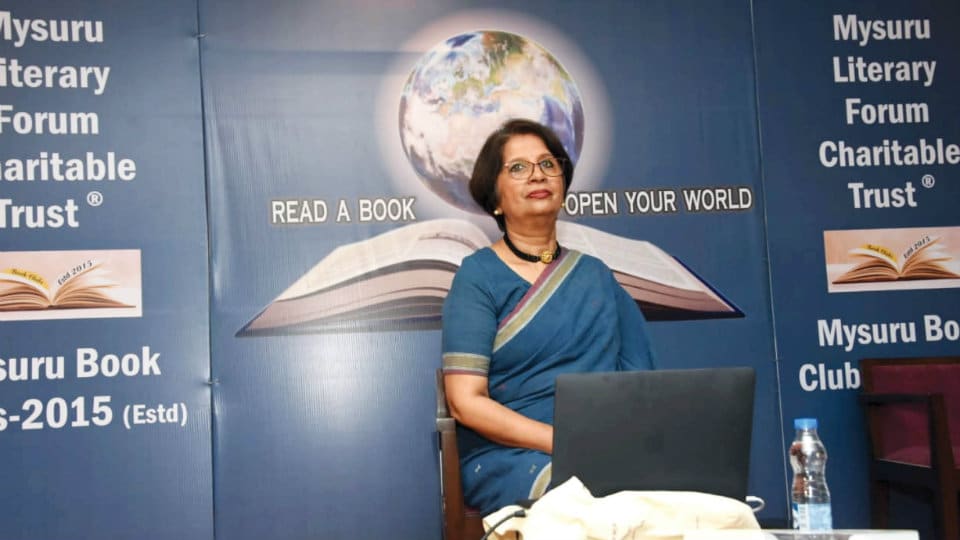 Mysuru:  “Diplomats prefer a win-win solution and their only aim is to see how one can prevent conflict and build confidence. If we succeed, then peace reigns but if we fail then it results in war. Having a difficult Western neighbour, the challenge is all the more and since we are the biggest country, with bigness comes baggage and hence building more bridges becomes important,” said former Foreign Secretary Nirupama Menon Rao.

She was speaking at the Third Edition of the Mysuru Literature Festival organised by Mysuru Literary Forum and Charitable Trust and Mysuru Book Clubs (2015) at Hotel Southern Star on Sunday on the topic “From Diplomacy to Peace-building in South Asia through Music,” and said with her nearly 40 years experience as a Diplomat she has found that it is possible to build peace by bringing people of different nationalities to come together and perform through music.

Making a video presentation on South Asian Symphony Orchestra (SASO), she said that they presented the concert at NCPA (National Centre for the Performing Arts) in Mumbai on Apr.26 which was a launch event and this NGO’s role is to embark on a cultural diplomacy.

There has been a revolution in communication and as a result the ordinary citizen is empowered. Hence, the days of the diplomats or civil servants sitting in ivory towers are over. So diplomats need to feel the ground beneath them and involve in what is now called gum boot diplomacy, she said.

Connecting music to diplomacy, Nirupama said that diplomacy is conducted in an amphi-theatre and we are all gladiators. When compared to our neighbours we have developed leaps and bounds and hence it is important to meet the aspirations of the youth and this young demographic is restless which is looking for economic development and what needs to be practiced is citizen-drive diplomacy.

“I see the role of the orchestra SASO which I started with my husband Sudhakar Rao as a microcosm which reflects the macrocosm,” Nirupama said.