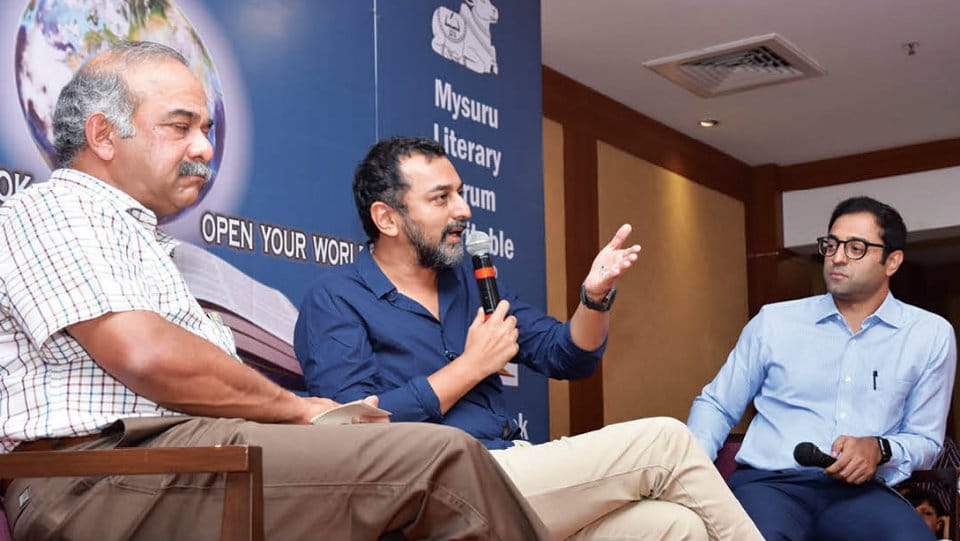 Mysuru: An organised efforts were on to make the media toe the line of the rulers or else to gag them either by hook or crook, said NDTV Managing Editor Sreenivasan Jain.

He was speaking on the topic ‘Is the Fourth Pillar of Democracy still strong?’ at the session organised as part of the third edition of Mysuru Literature Festival at Jyothi Hall, Hotel Southern Star on Vinoba Road in city yesterday.

Observing that this concerning situation existed even during the previous governments, Jain noted that this scenario has deteriorated further. He added that tactics that are being used to control media is now getting more organised.

Replying to queries by Star of Mysore Managing Editor Vikram Muthanna, who was one of the panellists, Sreenivasan Jain said that a hypocritical culture has creeped into the media. Claiming that the stature of media is getting deteriorated with over 400 news channels and one lakh daily newspapers in place, he said that he had never seen such a scenario in his 25 years of journalism.

Pointing out that it was not correct to blame the Government for everything, he, however, agreed that more organised efforts were going on now than before to control the media. Observing that the economics of the print media has changed over the past decades, he said that the print media was more dependent on advertisements for revenues.

When SOM Managing Editor Vikram Muthanna pointed out that the Congress Government too attempted to throttle the media during Emergency, Sreenivasan Jain said that it was time to have a look at the current scenario.

Admitting that the Congress too had attempted to choke the media in the past, Jain opined that the pressure and threats then were not in such scale that we are seeing today. “Another form of Emergency exists now,” he observed. Replying to another question by Vikram Muthanna on corruption in media, Jain said that there will be rotten fruits too in a basket and everyone cannot be measured with the same scale.

The panellists also took on questions from the audience. The earlier session saw panellists discussing the book “The Courtesan, the Mahatma and the Italian Brahmin – Tales from Indian History.”

Book author Manu S. Pillai, replying to a query by another panellist Preethi Maroli on the usage of the word Ammachi in the book, said that in Kerala, pregnant women were not called pregnant and instead they were referred to someone having something in their stomach. After the woman gave birth, these very people used to say that the stomach has been downloaded and this was the practice when Kerala was ruled by kings.

READ ALSO  A report on the Night of Shiva

Pointing out that there was a lot of difference between Kalidasa’s Shakunthala and the actual Shakunthala, Pillai said that historians cannot claim that whatever they have written was true. The writers only script upon presuming what may have happened at that point of time, he pointed out.