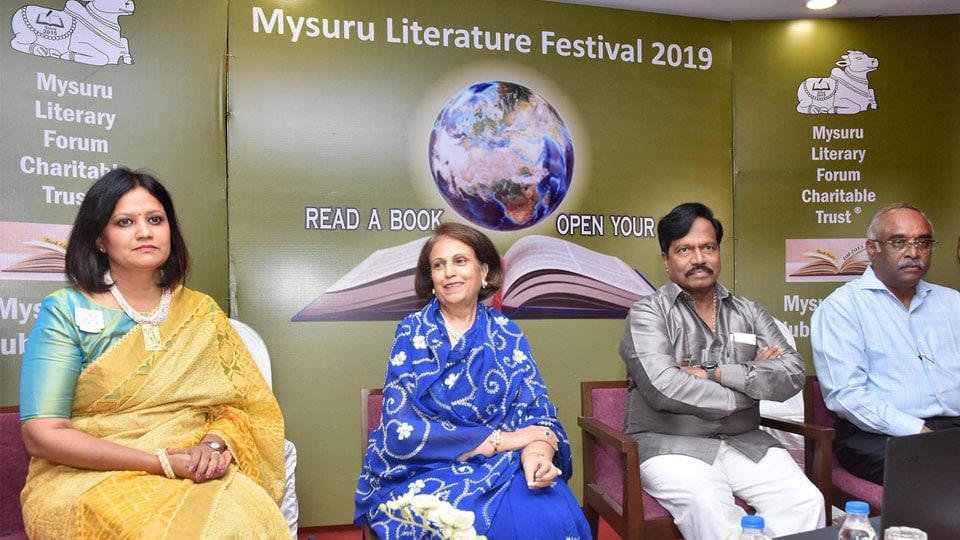 Mysuru: The third edition of the Mysuru Literature Festival began here on Saturday with author Dr. Devdutt Pattanaik delivering his key-note address on “Ramayana Vs Mahabharata”.

In her inaugural address, Pramoda Devi lauded the organisers for their choice of topics for the discussion.

Observing that the flexibility in the topics will bring its own flavour to the festival, Pramoda Devi said that she was saddened by the demise of playwright Girish Karnad, who had inaugurated the first edition of the festival in 2017 and added that his death has left a void   in the literary world.

Noted Director T.S. Nagabharana, who spoke after releasing the booklet titled The Book Leaf, recalled the works of Jnanpith awardee Girish Karnad and said that he was representing Karnad in the literature festival.

Stating that he owes his 30 movies to Girish Karnad, Nagabharana said that literature festivals always carry responsibilities over its shoulders. Pointing out that only literature has the capability to see human beings as humans, he observed that humans should have to take the neutral path, keeping aside Right and Left ideologies.

Emphasising on the importance of the Littérateurs in educating the Society, Nagabharana said while the mind is engaged in a lot of calculation, the heart through its emotions can relate to humans better.