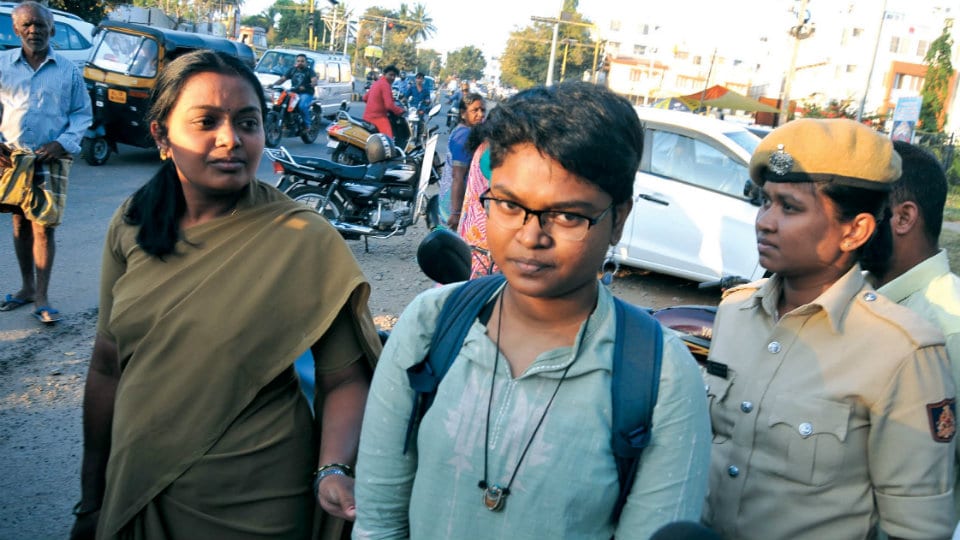 Mysuru: The City Police on Saturday grilled Nalini Balakumar, the woman who held aloft a ‘Free Kashmir’ placard during a recent protest in Manasagangothri on Jan.8 against the violence in New Delhi’s Jawaharlal Nehru University (JNU) campus recently, for over seven hours.

Nalini, an alumna of University of Mysore’s Department of Studies in Mass Communication and Journalism, appeared at Jayalakshmipuram Police Station along with  her father Balakumar after the Police sent her a notice on Friday asking her to appear before them in connection with the sedition case booked against her. The Police posed her a set of about 80 questions and have taken a statement from her as per the set procedure, according to sources. Nalini was also asked whether she was associated with any organisation and who invited her to join the protest. Besides, she was also questioned why her mobile phone was switched off and her social media account deactivated after the incident, the sources added.

DCP M. Muthuraj said that Nalini was allowed to leave after questioning, but was told to make herself available to the Police for questioning in the future, if necessary.

Before leaving for the Police Station on Saturday morning, Nalini released a video clarifying that her intention was only to bring to notice the internet shutdown in Kashmir for the past five months. Maintaining that she never intended to spread any kind of hatred, she said that she was apologising to the Police and the public for the confusion  created by her action.

Nalini,who had secured interim bail from a city Court on Friday, executed a personal bond for a sum of Rs.1 lakh with one surety for a similar sum.

Even as Nalini appeared at Jayalakshmipuram Police Station for questioning, a large number of her friends and  members of various organisations had gathered in front of the Police Station on Saturday morning.