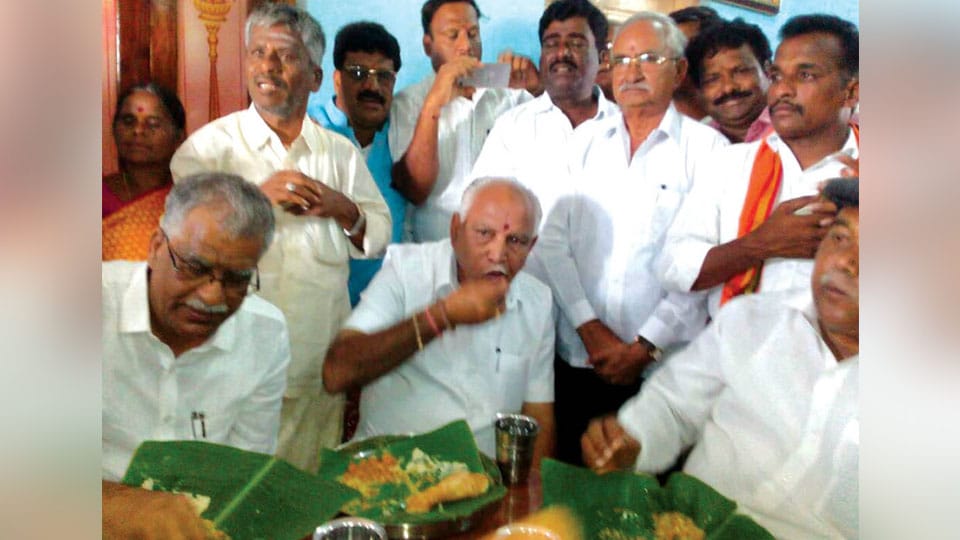 Chamarajanagar: As part of the party’s State-wide ‘Janasamparka Abhiyana,’ State BJP President Yeddyurappa arrived in Chamarajanagar this morning on a one-day visit to the district. Upon his arrival from Mysuru, Yeddyurappa was accorded a warm reception by the party workers on the outskirts of the town.

The State BJP Chief began his campaign by planting a sapling near the Government polytechnic. He later left for Ramasamudra on the outskirts of the town, where he garlanded the statues of Dr. B.R. Ambedkar and Babu Jagjivan Ram and thereafter had fruits at the residence of Dalit leader and Chamarajanagar CMC Member Mahadevaiah.

Later addressing a press meet at Patrakarthara Bhavan, Yeddyurappa said that he had launched his State-wide tour on May 18 and Chamarajanagar was the 18th district he was visiting.

Asserting that he was visiting Dalit homes in order to have first-hand information of the problems in Dalit Colonies, Yeddyurappa maintained that he was having food at Dalit leader homes, upon invitation from the community members. He further said that Congress leaders were making baseless remarks against him, after being unable to digest the fact that the BJP was working more for the cause of Dalits.