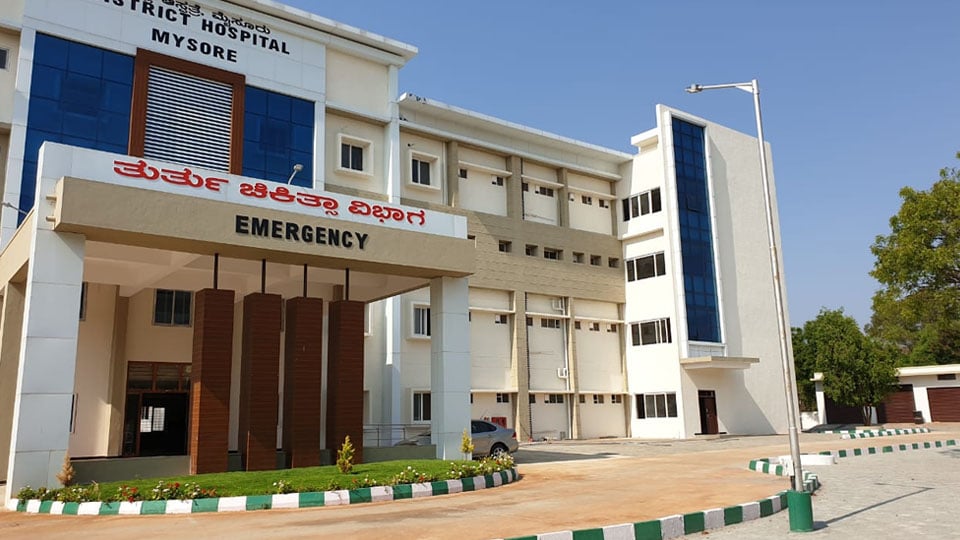 Likely to be discharged from hospital today

Mysore/Mysuru: In a positive development, P-273, a 72-year-old male from Nazarbad and the first Severe Acute Respiratory Illness (SARI) case who was tested positive for Coronavirus in Mysuru has been declared fit for discharge and is likely to be released from the designated COVID-19 Hospital on KRS Road this evening along with seven other positive patients who have been cured.

The SARI case was worrisome to the District Administration as he did not have any foreign travel history and the patient had several other co-morbidities and was in a critical state. Doctors and nursing staff at the COVID-19 Hospital need to be commended for this effort, said Mysuru Deputy Commissioner Abhiram G. Sankar this morning.

He was speaking to reporters at an event in city this morning after accepting Personal Protection Equipment (PPE), N-95 masks and sanitisers that were donated to the Mysuru District Administration by Union Minister D.V. Sadananda Gowda through Chamaraja MLA L. Nagendra.

“P-273 was admitted on Mar. 14 and he was in a critical condition with lots of complications. He was in the ICU and was monitored 24X7 by a team of doctors and cardiac specialists. He was treated based on the guidance provided by e-rounds (online networking sessions of doctors from NIMHANS, Bengaluru, introduced by the State Government) and telemedicine network that was linked to KRS Road Hospital,” he said.

Disclosing further details, the DC said, “The patient was treated without ventilator as in many cases like in Western countries, ventilator support was the reason for many COVID casualties. As advised in e-rounds, the SARI patient was treated using High Flow Oxygen Therapy through his mask in the Critical Care Unit at the COVID-19 Hospital. The patient’s condition showed remarkable improvement and today he will be discharged,” the DC said.

Based on the request by the 72-year-old patient, he will be shifted to a private hospital where an isolation ward will be set up. “Initially we were worried as the patient had many co-morbidities along with COVID-19. Now all his tests have proven negative and the team of doctors and nurses at the hospital must be complimented for this remarkable achievement,” he added.

On the overall situation in Mysuru District, the DC said that the growth rate of COVID-19 in Mysuru, which has the second-highest number of cases in the State after Bengaluru, has indicated a slowdown in new infections. The number of active cases was dropping with improvement in the recovery rate and patients being discharged from the hospital.

Every day, the state-of-the-art Viral Research and Diagnostic Laboratory (VRDL) at the Department of Microbiology in Mysore Medical College and Research Institute (K.R. Hospital) tests 350 samples and the team there is working in 3 shifts round-the-clock.

“They do not come to limelight and every day they test more than 300 samples. Because of the team, the test rate has increased in Mysuru and we have topped in the State. Earlier, we used to test 150 samples per day but now we are crossing the 300 mark daily as the VRDL is getting samples from Mandya and Kodagu also,” Abhiram Sankar said.