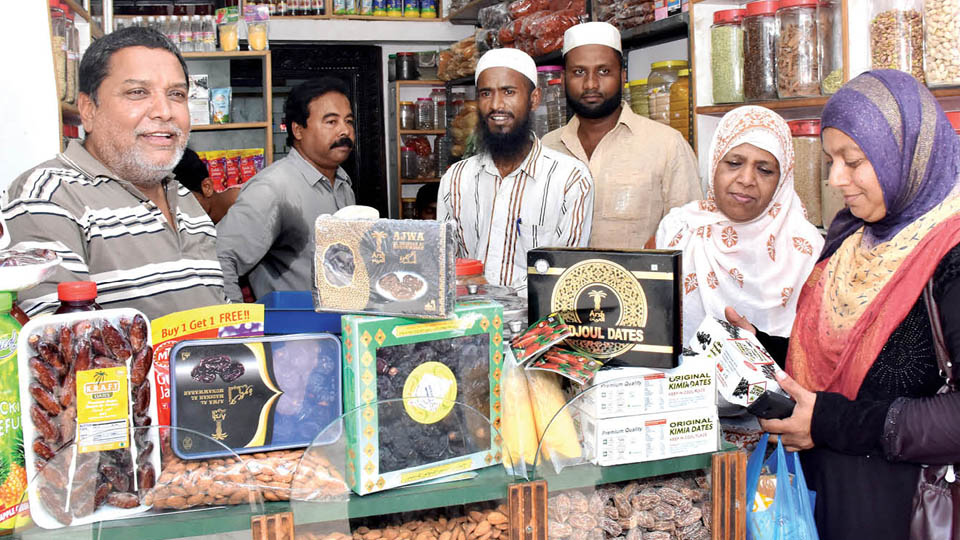 More than 50 varieties of dates available for Ramzan

The holy month of Ramzan observed by the Muslims began from yesterday. Ramzan is synonymous with dates and we see mounds of them everywhere. Since Ramzan is the month of fasting from dawn to dusk, it is a religious practice to eat dates before breaking the fast in the evening.

Hence, during Ramzan, there is great demand for dates and it sells a lot. Even before the fasting began, several cartons of dates have already been sold. According to a wholesaler, in the last five days nearly five loads of dates were sold.

In Mysuru every year, more than 20,000 kgs of varieties of dates worth crores of rupees are sold. Date also has a religious connotation. There is a belief that a Muslim religious leader had planted date plant in Madina and nurtured it. Hence, date has acquired a lot of religious significance during fasting.

The dates grown abundantly in Saudi Arabia, Iran, Iraq and other Islamic countries are imported by other countries. Even in India, dates are imported to Mumbai and Tamil Nadu, from there it is sold in wholesale to other States. That is how dates have hit the Mysuru market now.

Shops selling dates are doing good business in Santhepet, Devaraja Urs Road, Mandi Market in Mandi Mohalla, Rajivnagar, Udayagiri and other places in city. The business has picked up even two days before the commencement of Ramzan fasting and customers are thronging the shops selling dates.

Padmavathi Trading Company’s Sripal Chopra and Srikanth Chopra, who run a wholesale shop at Santhepet said that the demand for dates has gone up this time. Usually the sale of dates begins after the fasting commences. But this year, the demand has begun much in advance and the consignments are being sold on the day it arrives, they add.

Seeing the demand, more and more dates are being imported. Usually the demand during Ramzan increases by 40 to 50 per cent, they said.

There are nearly 50 to 60 varieties of dates that include Kimia, Azuva, Kalme, Fit, Desert King, 24 Carat, Armony, Rehana-Zobiel and Honey Dates to name a few. Out of this, Kimia and Azuva varieties are in great demand because it is very tasty, said Srikanth Chopra.

Dates are being sold from a minimum of Rs.180 per kg to a whopping Rs.1,800 per kg for the highest quality. However, there are really cheaper variety available at Rs.100 a kg too.

But wholesaler Sripal Chopra said that they keep only high quality dates and for this reason the customers go to their shop.

Dates are also used in preparing sweet dishes during Ramzan. In city supermarkets and malls, dates are being sold in good quantity. So, we stock the dates well in advance, said the owner of a well-known supermarket who did not wish to be named.

Not only are dates sold in supermarkets, malls and wholesale shops, it is also being sold on road on pushcarts in areas like Udayagiri, Rajivnagar, Shanthinagar, Mandi Mohalla and Akbar Road.

Dates as gift to poor