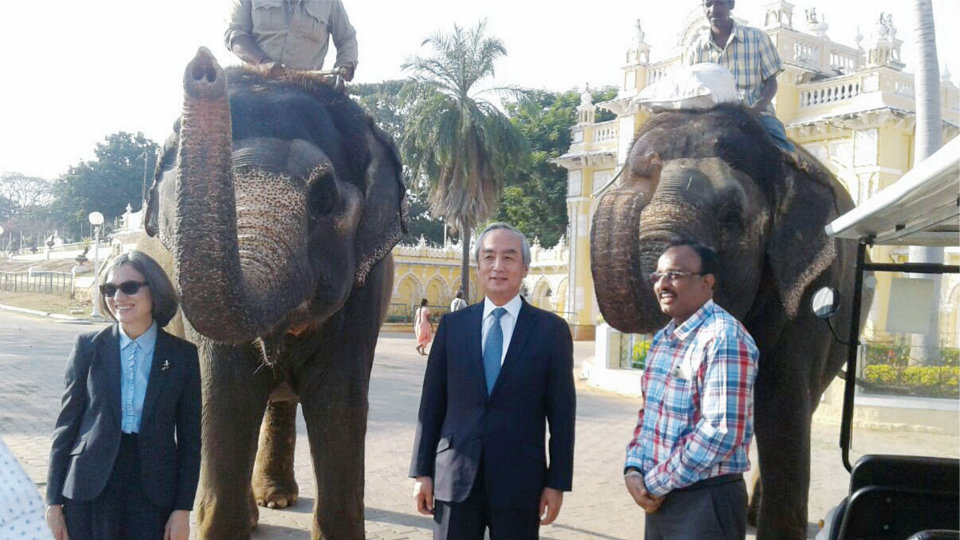 Ambassador of Japan to India Kenji Hiramatsu and his wife Patricia Hiramatsu visited the Mysore Palace yesterday. The couple was welcomed by the Mysore Palace Board Dy. Director T.S. Subramanya by offering them traditional Mysuru Peta and shawl. Kenji and Patrica were taken on a tour inside the Palace and were told about the contributions of Wadiyars during their tour. On seeing the exhibits, the couple appreciated the efforts of Mysore Palace Board in preserving the antiques.

Later, they were taken on a tour within the Mysore Palace premises during which they stopped by the Palace elephants. Kenji is said to have informed the Palace Board officials about his willingness to visit the Palace during Dasara celebrations.

Kenji Hiramatsu and Patrica were also handed over the gifts send by Pramoda Devi Wadiyar. They also tasted and got to know about the famous Mysuru Pak and Nanjangud Rasabale (banana) which has been listed among the geographical indicators.

Indo-Japan Chamber of Commerce & Industry (IJCCI) Karnataka Branch Hon. Secretary P.N. Karanth and others were present on the occasion.