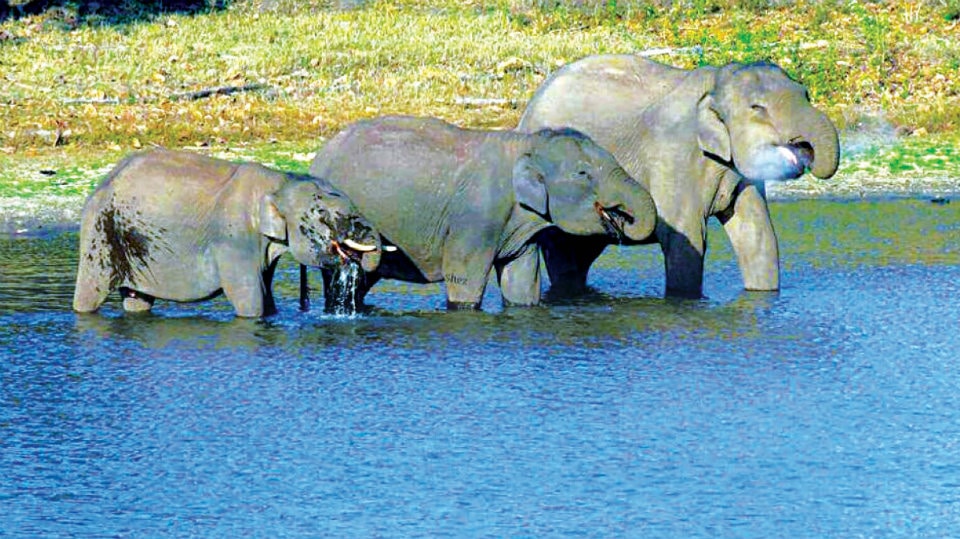 Mysuru: After a long spell of drought for four consecutive years, ponds and lakes inside Nagarahole National Park and Tiger Reserve are filled with water, thanks to over 2,000 mm (78.74 inches) rainfall this year. This has come as a boon to the parched land and wild animals are quenching their thirst.

The Tiger Reserve covers 848 square kilometres of area and has over 220 ponds and other water bodies.

In addition, there are small rivulets flowing inside the Park. Though the region had experienced bountiful rainfall even last year, ponds and water bodies were not overflowing, said the officials.

After experiencing drought for four years, the silt-filled ponds were desilted and a few ponds were also constructed inside the National Park limits. There is enough water in the lake situated at Anechowkur check post. The water bodies beside the road at Periyapatna-Boodithittu are also full. These water bodies had remained dried up since the last 10 years.

Drying up of watering holes was tipping the fragile ecological balance of the forests, home to one of the densest populations of tigers in the world. A few lakes and ponds had even lost their identity. Bountiful rain in the months of August, September and October has rejuvenated the water bodies. The Aanecamp Kere of Majjigehalla, situated on the periphery of Nagarahole near Gonikoppal, is also full.

During the dry years, the Forest Department took measures to dig small pits in the watering holes and bringing water tankers to fill them every week. Also, as a more lasting solution, the Department dug up borewells beside ponds and solar panels were installed to power  the motor pump. This idea worked as nearly 18 such ponds were restored.

The Nagarahole National Park is spread across 643 Square Kilometres and has been divided into 8 Zones — Nagarahole, Kallahalla, Veeranahosahalli, Hunsur, Anechowkur, Antharasanthe, D.B. Kuppe and Metikuppe. Mavukal Reserve Forest has been included under wildlife division of Anechowkur range, said Nagarahole Wildlife Division ACF Prasanna Kumar. To protect forest from summer, the Department is planning to lay fire-lines, he added.