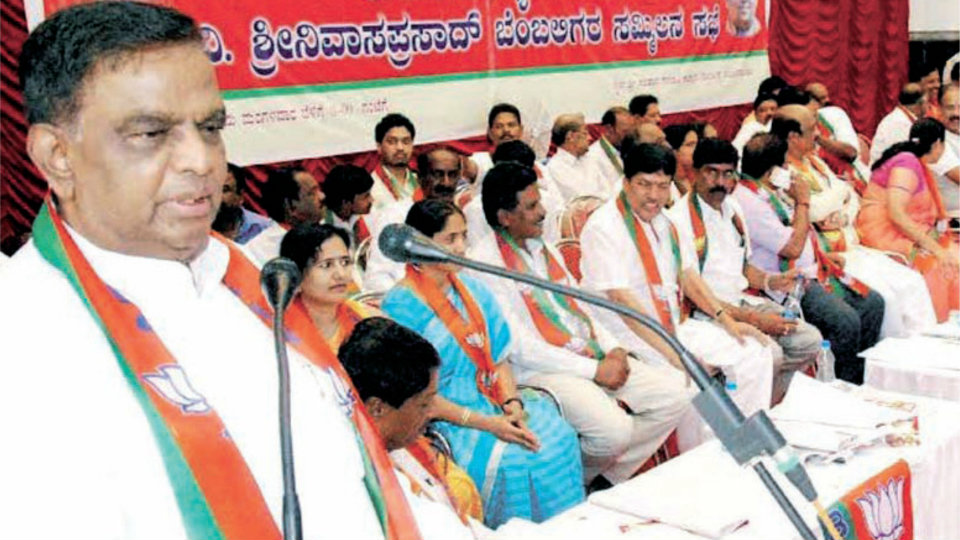 Addressing a convention of BJP workers, former Minister V. Sreenivasa Prasad, who resigned from the Congress and joined the BJP, declared that he was ready to quit active politics if he loses and dared Chief Minister Siddharamaiah to resign if the Congress loses in Nanjangud bypoll.

Admitting his followers, including Panchayat members and members of urban bodies into the BJP fold, he ridiculed Siddharamaiah for directing his Cabinet colleagues to camp in Nanjangud with an agenda to defeat him.

“Let Siddharamaiah bring AICC Vice-President Rahul Gandhi, Meti, Ramesh Jharkiholi or Tanveer Sait, I am not worried about them,” he said and termed Siddharamaiah as a backstabber and felt his conspiracy and betrayal had led to Nanjangud bypoll.

Accusing Siddharamaiah of not respecting his Cabinet colleagues, the former Union Minister criticised the Chief Minister for going to any extent to cling to power and charged that Siddharamaiah does not need honest and senior leaders as he prefers only corrupt people.

Accusing the CM of engineering the defeat of KPCC President Dr. G. Parameshwara in Koratagere constituency  in 2013, he added that both Mallikarjuna  Kharge and Parameshwara have expressed displeasure and anger at Siddharamaiah’s actions on many occasions. Listing out the programmes launched in Nanjangud constituency, he said that the Government has released funds after his resignation as MLA and dared Congress leaders for a public debate on the development works in his home constituency.

State BJP General Secretary Aravinda Limbavali, speaking on the occasion said “If Sreenivasa Prasad had not supported Siddharamaiah, he would not have become the Chief Minister.”

“Congress without Sreenivasa Prasad is on the verge of extinction and I will camp in Nanjangud to ensure Prasad’s victory (as a BJP candidate) in the bypoll,” said Udupi-Chikkamagaluru MP Shobha Karandlaje.