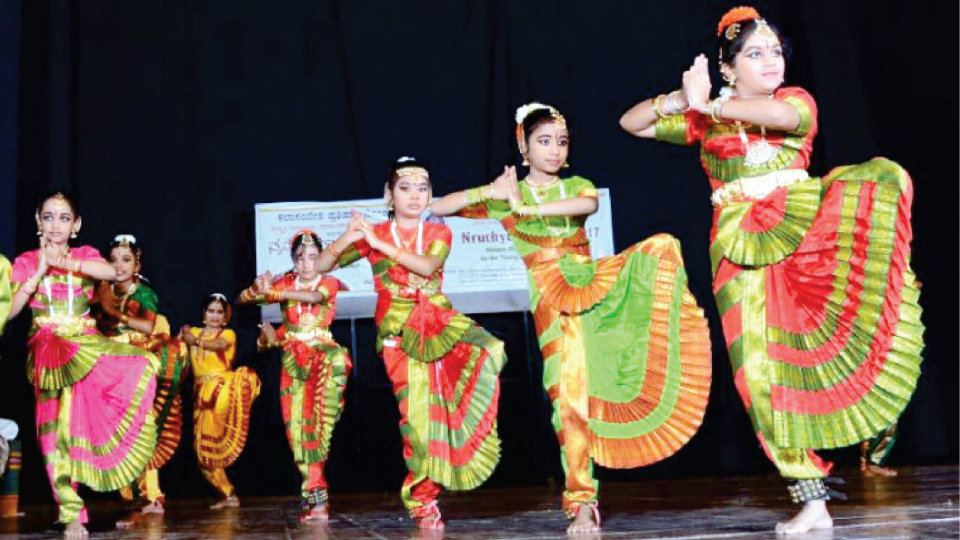 Nruthyopasana is an annual dance festival which offers a promising platform for every individual learning Bharatanatyam under Kala Sandesha Prathishtana. This year’s Nruthyopasana, a three- day festival with Grant-in-aid by the Ministry of Culture, was organised at various ends of the heritage city, Mysuru.

Day-1 (Jan. 26) of Nruthyo-pasana was held at Ganabharathi (Veene Seshanna Bhavana) and was inaugurated by an acclaimed industrialist and an exemplary art patron of the city, K.V. Murthy. Dr. C.G. Ushadevi (retired Kannada lecturer of Vidyodaya First Grade College) and Vidu. Mithra Naveen (renowned Bharatanatyam artiste) were the chief guests. Dr. D. Umapathy (Chairman of Kala Sandesha Prathishtana) was also present. The evening witnessed a duo performance of Prathishtana’s senior most artistes, G.M. Anusha and Akshatha Y. Adiga. Their swift movements and graceful abhinaya added to the intricate choreography of Guru K. Sandesh Bhargav and was indeed a treat to the concert-goers. K Sandesh Bhargav on natuvanga, Vidu. P. Rama on vocal, Vid. Swami on mridanga, Vid. S. Narayan on violin and Vid. Nithish Ammannaya on flute, propped up the evening’s performance.

Day-2 (Jan. 27) was a Bharatanatyam recital with the authentic structure of marga by the junior artistes of different branches of the organisation at Kalamandira, Mysuru. The annual report was transformed into a fine documentary that was played at the very beginning followed the website launch.

A total of 150 young artistes engaged in the performance, choreographed by the senior disciples of the organisation, tapped their tiny feet to the rhythm of the natuvangam by G.M. Anusha, vocal by Vid. Shree Harsha, mridanga by Vid. Hanumantharaju, violin by Vid. Narayan, flute by Vid. Nithish Ammannaya and rhythmpad by Vid. Vinay Kumar.

Day-3 (Jan. 28) of the three-day festival was organised at Ganabharathi with a valid Dance-Drama on ‘Misconceptions of Valmiki Ramayana’ titled ‘Chintana Ramayana.’ The senior disciples of the organisation set a glorious opening with the traditional Melaprapthi and, partook as diverse characters from Ramayana. Every character that crept in had its own essence and made a potential stand. The whole concept was a showdown between two common men finely crafted by Dr. Jyothi Shankar and gracefully choreographed by K. Sandesh Bhargav. With Guru Sandesh Bhargav on nattuvanga, Vid. Balasubramanya Sharma on vocal, Vid. Hanumantharaju on mridanga, Vid. Narayan on violin, Vid. Nithish Ammannaya on flute and Vid. Vinay Kumar on rhythmpad, the festival headed towards a grand conclusion.