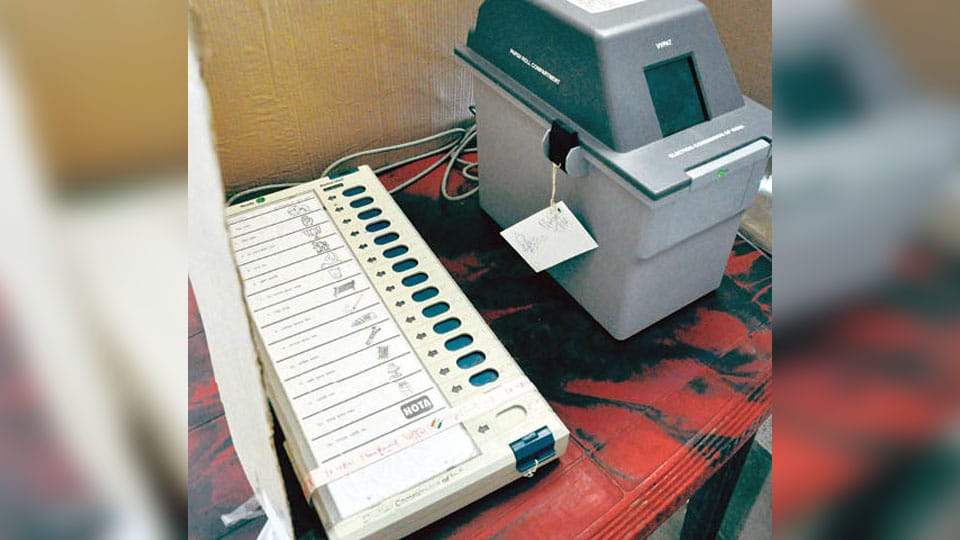 Nanjangud and Gundlupet Assembly by-polls: Voting to be foolproof

In order to bring in transparency in the electoral process and to prevent malpractices and electoral fraud, the Election Commission has decided to use Voter-Verified Paper Audit Trail (VVPAT) units along with Electronic Voting Machines (EVMs) for voting process in Nanjangud and Gundlupet by-elections on April 9.

VVPAT unit is a printer-like machine attached to EVMs and it allows voters to verify that their vote has been cast correctly. Once a voter presses the button of his choice in the EVM, a printed paper appears with the name of the candidate and the poll symbol so that the voter can verify it. After the voter views the receipt, it goes inside a container linked to the EVM, which can be accessed only by the polling officers.

These printed slips can be accessed and verified by the polling officers in case the EVM develops a snag during the counting process. The printed material that are secured in a box can also be used to verify if there is any rigging or electoral malpractice. The printout is then deposited in a box and can be used to resolve any dispute regarding the election.

Speaking to Star of Mysore this morning, Deputy Commissioner D. Randeep said that for the Nanjangud by-elections, 355 VVPAT units will be brought from Uttar Pradesh and two officials from Mysuru have been sent to Barabanki. “We have sent Shivakumar, District Officer, Integrated Tribal Development Project and Jnanesh, Village Accountant, Chamundi Hill and VVPAT units are being loaded into a truck at Barabanki. They will arrive in Mysuru by next Monday or Tuesday,” Randeep said.

“There are 236 polling booths in Nanjangud and we will have 236 VVPAT units in all booths. The rest will be spare units,” said Additional Deputy Commissioner T. Venkatesh.

“Once a voter has voted his preferred candidate in the EVM, the paper appears with the name of the candidate and the poll symbol so that the voter can verify it. It will be visible for 7 seconds and then it will be stored in a container. The VVPAT machine will be placed between the control unit and the ballot unit,” they explained.

TRAINING FOR POLLING OFFICERS: Two master trainers from Mysuru have been sent to New Delhi to obtain training to install and operate the VVPAT units. They are Satish Kumar, General Manager, Chamundeshwari Electricity Supply Company (CESC) and Pathange Naik, Assistant Teacher, Government High School, Nanjangud. “These officers will be back in Mysuru tomorrow and they will train the other polling officers and returning officers. A demo of VVPAT units and their operations will be done for political parties and media too,” they said.

FIRST TIME IN MYSURU: VVPAT units will be used for the first time across all booths in Nanjangud and Gundlupet constituencies. Earlier, in 2014, VVPAT units were used in select booths in Ballari and Bengaluru South Lok Sabha constituencies. The system was first experimented during the Nagaland by-elections in 2013. However, Mizoram was the first State to introduce VVPAT machines on a large scale. Bharat Electronics Limited and Electronics Corporation of India Limited have built the VVPAT system.