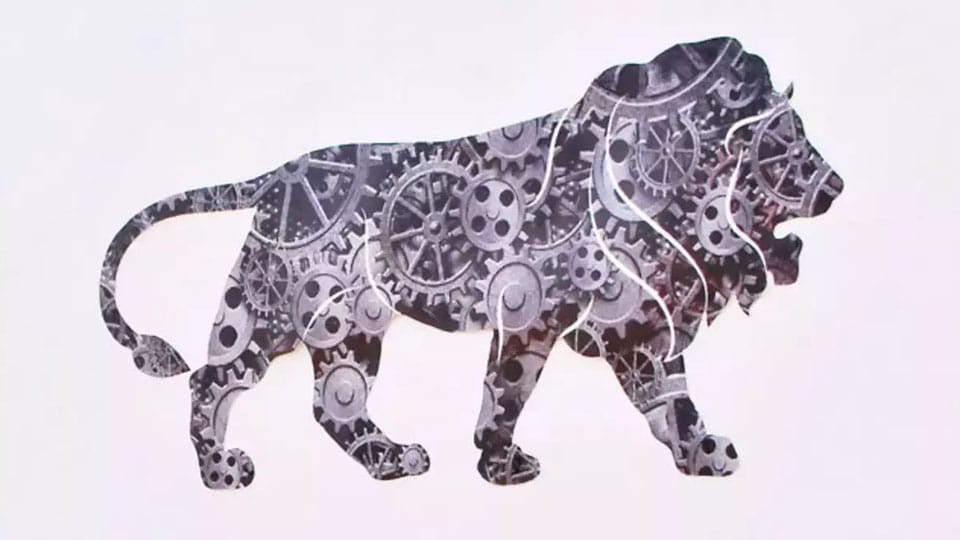 A big gathering of devotees. All Ram Bhakts. A Senior Guru was giving  his pravachan  and the  full  crowd was listening with rapt attention the discourse  on Ramayan. The Guru, during the talks, casually mentioned that  the organisers  have  kept  500 statues of Rama and 500 statues of Ravana  outside  the venue.  Every devotee could carry one statue only either of Rama or Ravana.

After the discourse was over, all the devotees in the hall started laughing out aloud knowing fully well the end result. Just 5 minutes before the finish of the discourse, the Guru casually mentioned that the statue of Rama was made of wood and the one of Ravana of silver.

Now, the whole dynamics changed.  Slowly the Guru giving the discourse realised the crowd thinning out.  When he sent his disciple to check, he found out that the so-called Ram Bhakts were queuing up for the Ravana statue ! Of course, there were some Ram Bhakts too who remained seated but majority had vanished.  The Guru’s final words were, “When one is not spiritually fulfilled, your attitude will change as per your self interest.” So true, is it not ?

When posted in Delhi, whenever a colleague  died on weekdays,  the complete Department used to come to me demanding a bus to be arranged to ferry them to the burial grounds.  Since we had a transport division, this demand was easily met.  Sometimes I used to go to the burial ground too and used to be impressed with the love and affection shown by the workers towards their deceased colleague.

READ ALSO  Is technology everything in life?

After some days, another colleague expired unfortunately on a weekend. When I reached the burial ground I was shocked. There were hardly a few of his office colleagues.  That time my Personal Assistant let out the secret. The staff were very happy to be escorted to the burial ground only on weekdays since they could bunk their office work and if they had to go on their own expense on a weekend they quietly avoided it ! All the so-called love and affection was just a sham.

The world is materialistic and one should not forget it. You just go to any temple and watch how the priests  behave if and when a cash rich vvip lands. All the hidden gates gets opened, rules are flouted. Money speaks. Rules and regulations are meant for ordinary mortals. A single day collection of Tirupati recently was a whopping Rs. 2.5 crore. It is sad but true, many a rich persons who would not donate a single rupee to any meaningful orphanage would not bat an eyelid to donate crores to a temple.

A popular recent trend was “Ban Chinese products.”  A very popular trend indeed.  Even the Government had informed all e-Commerce players to name the country of origin  in all the products  on display to ensure that  the consumer make a informed decision. Of course, these e-Commerce giants do care a hoot for all the Government’s directions and made a lame excuse for not naming the  country of origin tag on all the products.

But what happened to all the nationalistic slogans during the recent big sale online? The top end Chinese products of Smartphone and TVs got sold out ! What happened to all the nationalistic feeling or pride?  When an alternative Indian product is not available in the range, matching the quality, Indian customers quietly lap up Chinese products.  Yes, Smartphones of various brands were giving a competition, but all Indian products were inferior technically.  So what is the answer to all this chest thumping nationalism sloganeering?  The answer is to develop in the coming years some top class Indian products which match these Chinese products in quality and price.  It is possible. We Indians have shown this in motorcycles. Indian motorcycles are exported all over the world and are preferred over Chinese mobikes. Our manufacturers beat them not only in quality but price too !

READ ALSO  Everyone deserves a paper cup only !

So what is the lesson in all these? Mere rhetoric of “Buy Indian” is not going to solve the issue. We have to start from scratch and manufacture goods to international standards. I am glad we have made some beginning and may succeed in a matter of few years but right now we are miles behind even contemplating matching Chinese manufacturing capacities.

To conclude, national pride, rhetoric apart, people buy what suits their interests and purse. In a lighter vein, if it suits them, they will praise Ravana too. Do you agree?