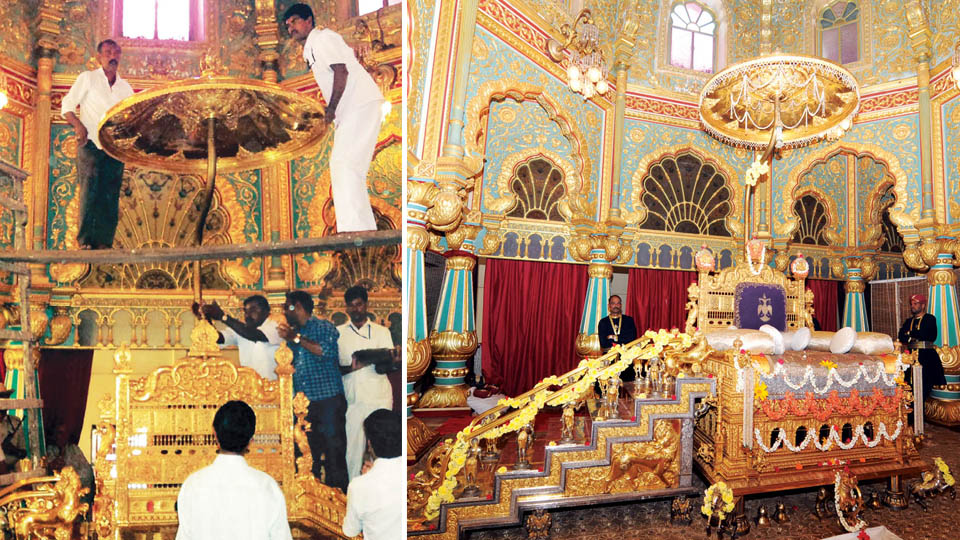 Khas Durbar at Mysore Palace from Sept.29 to Oct.7

Mysuru: The diamond-studded Golden Throne (Suvarna Simhasana) was assembled this morning at the Amba Vilas Durbar Hall in iconic Mysore Palace with all the accompanying rituals.

This is one of the major attractions (though it is not allowed for public viewing) during Navaratri celebrations from Sept.29.

The rituals began at 8.10 am with Navagraha Homa, Shanti Homa and Havans performed to the Strong Room in the underground of the Palace where the Golden Throne is kept.

Between 10.45 am and 11.23 am, the Golden Throne was brought to the Amba Vilas Durbar Hall where the assembling of the throne began for the 410th Dasara and the Bhadrasana was being assembled at Kannadi Thotti amidst tight Police security.

As part of this ritual, the Pattada Aane (elephant), Pattada Kudure (horse) and Pattada Hasu (cow), all adorned with royal cloths, were also brought and pujas performed.

In all, there are 14 parts to the throne that includes the steps leading to the throne, golden umbrella, main seat with cushions, arms rest to name a few. About 20 members of Palace staff assemble them.

It is usually artisans from Gejjagalli village in Nanjangud taluk who are involved in the assembling of the throne, but this time it is said that only two people from there were part of the assembling team with the rest from the Mysore Palace.

As a precautionary measure, the CCTV cameras installed between the Strong Room and the Amba Vilas Durbar Hall corridor were all covered and even the members of the staff were asked not to carry mobile phones inside. Their phones were taken away and kept in a locker.

Palace Board Deputy Director T.S. Subramanya, Palace Secretary M. Lakshminarayana and other members of the Palace staff were present.

According to sources, the presence of the royal family members, including Pramoda Devi Wadiyar, Yaduveer Krishnadatta Chamaraja Wadiyar, Trishikha Kumari Wadiyar and others are not a must during the throne assembling, as all the rituals are conducted as per centuries old traditions.

The puja rituals were led by Palace Priest Srihari.

The Khas Durbar (Private Durbar) will begin from Sept. 29 and end on Oct. 7. Before the commencement, the fixing of the Simha (lion) to the throne will be held between  5.10 am to 5.30 am. After that there will be Kanakana Dhara ceremony for the scion Yaduveer Krishnadatta Chamaraja Wadiyar between 8.05 am and 8.55 am at Chamundi Thotti.

The Pattada Aane (Royal Elephant) Pattada Kudure (Royal Horse) and Pattada Hasu (Royal Cow) will be brought at 9.30 am to Savari Thotti and between 9.50 am and 10.35 am there will be Kalasa puja. After Simharohana, Chamundeshwari Puja will be performed at Chamundi Thotti.

The Khas Durbar will begin on Sept. 29 evening at 7 pm when Yaduveer will ascend the throne and hold the Durbar for almost an hour. On the ninth day, that is Ayudha Puja Day (Oct. 7) being the last day of Durbar, Simha Visarjane (removal of lion) is performed by the King after evening Durbar concludes.