Home » News » ‘NEP to change the face of education’ 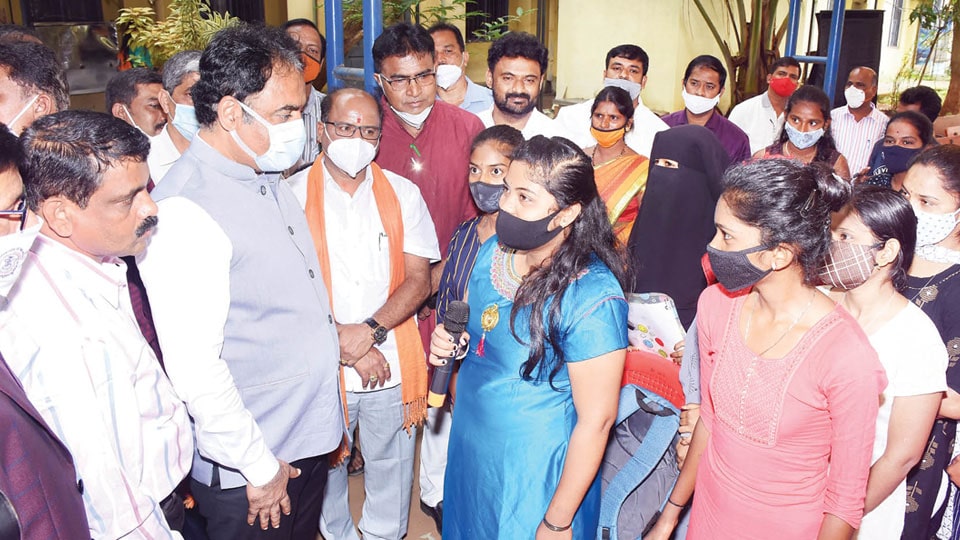 ‘NEP to change the face of education’

Mysore/Mysuru: The National Education Policy (NEP-2020) is set to change the face of education in India and the Government will spare no efforts in the next 20 months towards its implementation, said Dr. C.N. Ashwathnarayan, Minister for Higher Education & Information Technology and Biotechnology, Science and Technology and Skill Development.

He was addressing a seminar on NEP jointly organised by Maharani’s Women’s Science College (Autonomous), Maharani Arts College and Maharani Women’s Commerce and Management College in the city yesterday and said that NEP aspires to empower students by grooming them to become globally competitive.

“The education policy is completely student-friendly. It will change the face of education in India. And in collaboration with the innovation industry, technology is going to play a big role. The Union Government has set a timeline of 15 years for the  implementation of NEP. However, the State Government has decided to facilitate its implementation in a speedy manner. The Government will make all efforts in next 20 months to ensure maximum coverage,” he said.

Karnataka, an IT hub of the world, has become the first State to implement the NEP. The State has also translated the policy document into Kannada and formed a task force for its implementation. Karnataka started the admission process for the new academic year on Aug. 23 and will fully implement the policy from Oct. 1, he added.

The Higher Education Minister said that the onus of implementing the NEP lies on Universities and managements of institutions. “This could be implemented within the available subjects and we can consider adding more subjects in the following years to come,” he added.

He said so far, the Government has provided more than 3 lakh devices to students pursuing education in Government institutions and more than 2 lakh devices will be provided to students this year. This will enable anytime and anywhere learning for students with content par excellence. Assessment is also done digitally through these devices for students. “We are trying to ensure 100 percent net connectivity with upgradation of digital infrastructure in the State and 4G availability in more than 85 percent of the State’s geographical area. Learning programmes are also telecast on television,” he added.

Later, speaking to media persons, the Minister dismissed the allegations of Opposition party leaders on NEP, saying that it will benefit students of Government institutions to the maximum extent.

Universities, Colleges, private institutions and faculty have welcomed NEP and are eager to implement NEP. But, Opposition leaders are finding it difficult to digest the positive response pouring in favour of the policy. They don’t want good to happen neither for students nor the country, he said.

“We are ready to answer any question to be raised by the  Opposition related to NEP on the floor of the House. The issue is being discussed for seven years and it is tough to collect opinions now,” he said.

Dr. Ashwathnarayan said the Congress party was trying to create confusion unnecessarily. All communities will benefit from NEP but Congress is not interested in developments. No wonder they are trying to oppose without any valid reason, he noted.

The Minister also interacted with students and faculty of Maharani’s College.