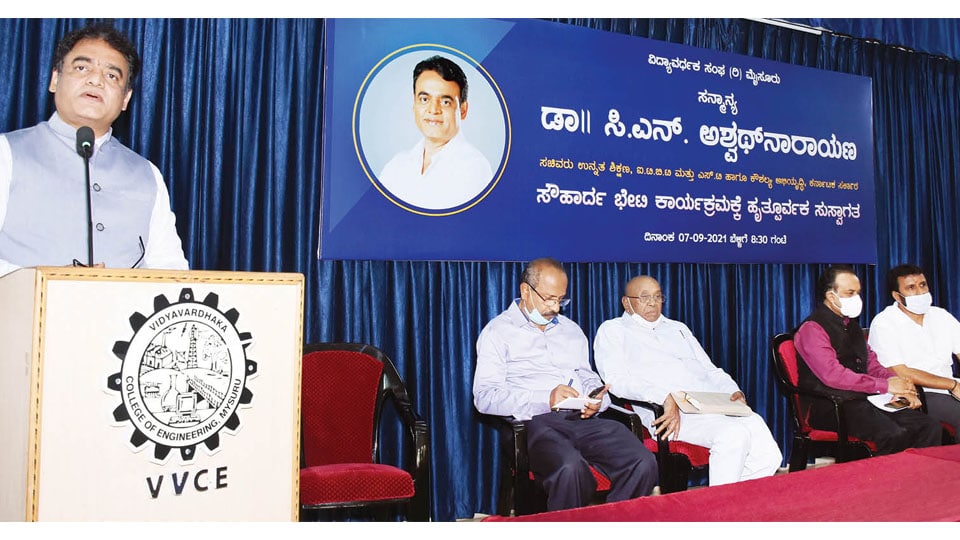 They were received  by Vidyavardhaka Sangha President Gundappa Gowda, Secretary P. Vishwanath and other office-bearers. Later, they were taken around the campus.

Speaking on the occasion, Dr. Ashwathnarayan said that the National Education Policy (NEP-2020) will surely be a game-changer in the field of education. Pointing out that the NEP is aimed at making students acquire skills and develop ideas, Dr. Ashwathnarayan said that the need of the hour is to train our students for meeting modern day challenges in the fields of Science, Technology , IT,BT etc.

Stressing on the need for promoting Startups, he said that he has brought along Prashanth Prakash for the purpose and the College authorities  and students can keep in regular touch with him for any technological advice. He further said that entrepreneurs must scout for opportunities in the global  digital economy, which are available aplenty now.

MLA L. Nagendra and others were present.

After his arrival in the city on Monday evening, Dr. Ashwathnarayan visited the Government ITI College on Mysuru- Bengaluru road in N.R.Mohalla, where upgradation works is being taken up in association with TATA Group of Companies.

The Minister inspected the works being taken up at a cost of Rs.85 lakh in the campus.

Dr. Ashwathanarayan, who was supposed to arrive at the ITI College at 4.45 pm, was late by nearly four hours and the staff of the College were an inconvenienced lot, having to wait for  such a long time. The Minister finally arrived at the ITI at 8.30 pm, bringing a sigh of relief for the College faculty and other staff.

Upon his arrival, the Minister went around the campus and inspected the new building and other works.

Dr. C.N. Ashwathnarayan Vidyavardhaka College of Engineering
‘NEP to change the face of education’
Mysurean makes it to IAF: His mother’s demise does not stop him from reaching his goal