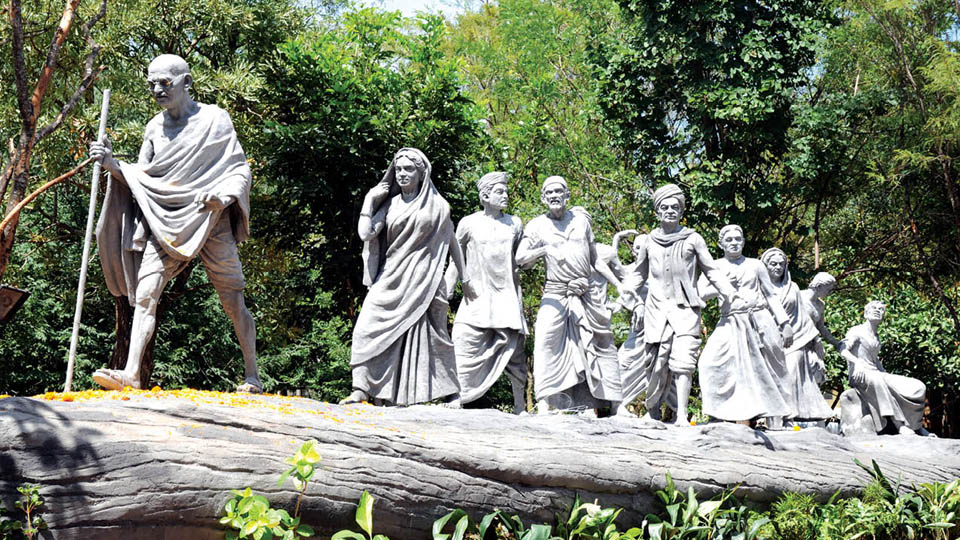 Mysuru:  It is the 150th birth anniversary of the Father of the Nation that is being celebrated all over the country. If ever there is a befitting tribute being paid to the Mahatma, one only has to drive to the new address in town but in the same old beautiful Manasagangothri campus that will invariably make their heads turn as one drives on Bogadi Road. The statue of Kuvempu at the entrance and the centenary clock tower that were the major attractions will almost become passé now.

After passing through the majestic gates of Manasagangothri, the eyes turn automatically to the left to the hitherto hidden Gandhi Bhavan, for there is the ‘Gyarah Murti’ sculpture, also called the Dandi March statue with Gandhiji leading ten common people (a similar statue made out of brass is installed at the Freedom Fighters Park in Subbarayanekere).

Next to that is Gandhiji playing with a child and the third one is the famous sitting posture of Gandhiji and Rabindranath Tagore. All these three statues are placed right at the entrance. 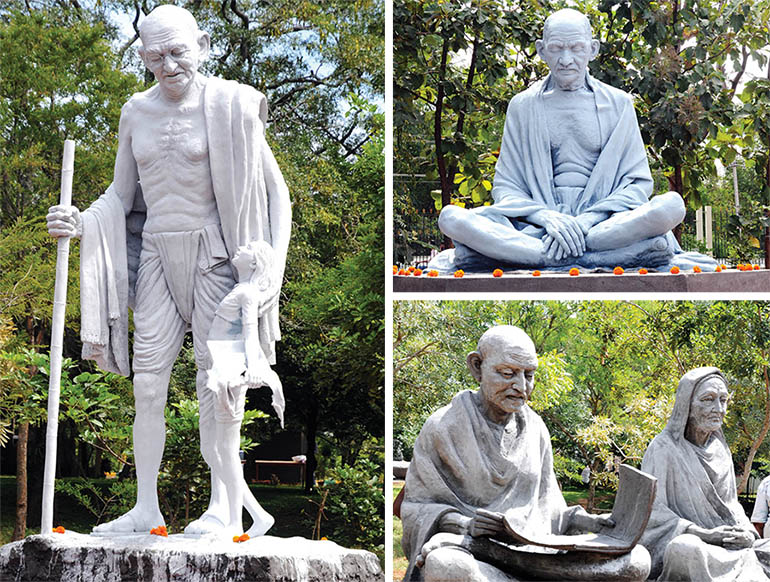 Then as one takes a left turn and enters the Gandhi Bhavan, the giant sculpture of Gandhiji spinning the Charka welcomes the visitors. To the left are a few more of the sculptures that include a boy leading Gandhi with his walking stick, Gandhiji and Kasturba in sitting posture, the world’s tallest statue of the Mahatma looking down benignly into the eyes of a girl holding a dustpan (mora). Next there is the beautiful statue of Gandhiji with Manuben (great-grand niece of Mahatma Gandhi) to his right and Abha Chatterji (his adopted daughter) to his left. The sculptures of the girls are so bright with innocence writ large on their faces that it attracts everyone’s attention. The one that also does not fail to attract the attention is the sculpture of Bapu in a meditative pose facing the entrance gate. 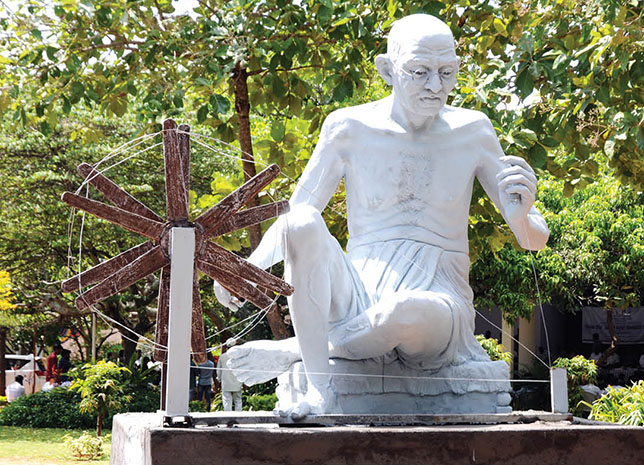 In all, there are nine statues and 27 figures spread over nearly two acres out of five acres in Gandhi Bhavan. “There are 34 sculptors out of whom 19 are senior and 15 Assistant sculptors who have worked on the 27 figures. In the 15-day workshop that began from Oct.22 and ended on Nov.5, the sculptors worked on cement material. A group of them would be involved in making a particular sculpture. For instance two or three would be working on Tagore and a few others on Gandhi. In the Gyarah Murti statue there are eleven figures including that of Gandhi and each group would sculpt on a particular figure. Thus we have nine statues of Gandhi as the central figure with other figures installed along with him which comes to a total of 27 figures and nine statues,” explained Prof. M.S. Shekar, Director, Gandhi Bhavan, speaking to Star of Mysore, this morning.

“It is a remarkable piece of work that our sculptors have achieved. They have done these beautiful pieces of craftsmanship in just 15 days with each sculpture depicting the depths, feelings and thoughts of the Mahatma. It is also for the first time that the Karnataka Shilpa Academy has given material to sculpt the statues,” said Karnataka Gandhi Smaraka Nidhi Vice-President Prof. G.B. Shivaraju. 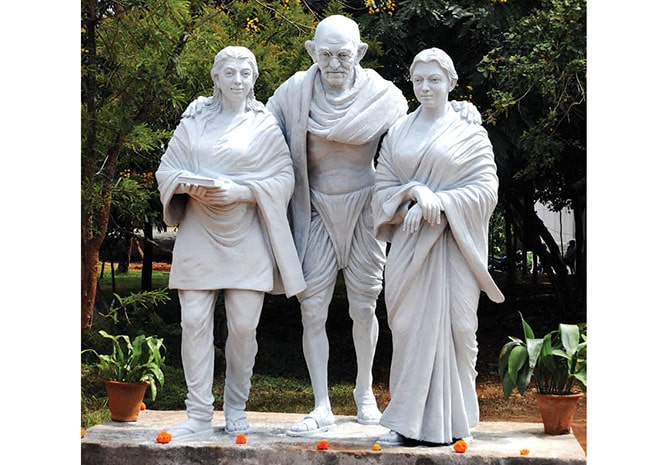 The University of Mysore had sanctioned Rs.2 lakh for the hospitality expenses of the sculptors, who were all housed in the University Guest Houses in Gangothri, said Prof. Shekar.

A plaque with the inscription ‘Seven Social  Sins’ both in Kannada and English, all to do with social and political conditions that the Mahatma spoke about, has been installed at the entrance between Gyarah Murti and Gandhi-Tagore statues. This plaque is presented by Prof. B.K. Shivanna.

Another plaque with the inscription ‘India of My Dreams’ which the Mahatma dreamt for the citizens of the country, presented by University of Mysore Alumni Association, has been installed near the bust of the Mahatma at the Gandhi Bhavan, which was inaugurated on Jan. 31, 1965 by Morarji Desai.