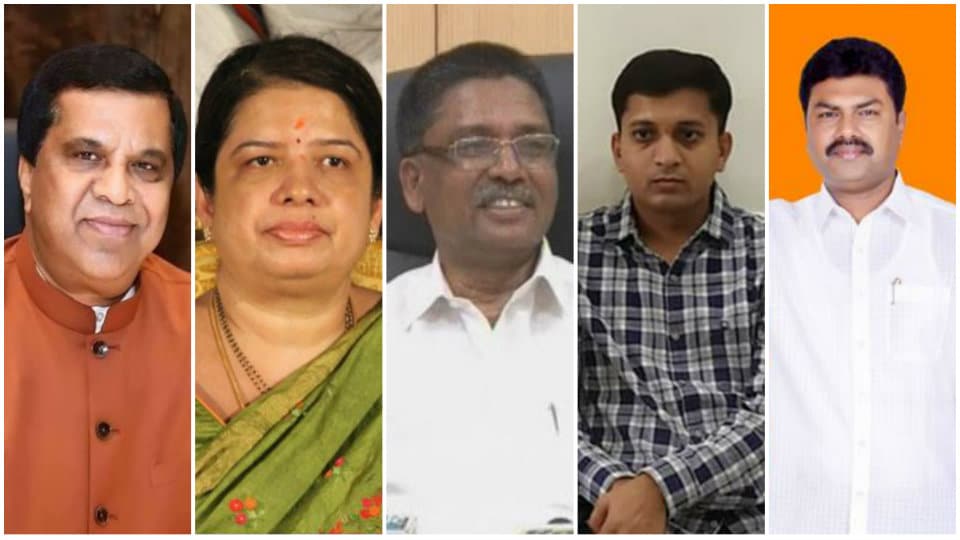 Bengaluru: In a huge boost on Deepavali Day to JD(S)-Congress coalition Government in the State, the ruling coalition candidates won four seats while the Opposition BJP managed to bag just one seat, in the by-polls held to three Lok Sabha (LS) and two Assembly Constituencies on Nov.3, counting for which was held today.

Even though the results, numerically, will make no difference to the Government, the by-poll was seen as a test for coalition partners, which fielded consensus candidates. While JD(S)-Congress secured a thumping victory in Ballari (ST) and Mandya LS and Jamakhandi and Ramanagara Assembly, BJP managed to retain the prestigious Shivamogga LS seat.

Shivaramegowda managed to consolidate his margin right from the first round soon after the counting began at the Government Boys PU College here at 8 am and ultimately won by a record margin of 2.9 lakh votes, a feat unmatched so far in the Constituency.

In Ballari, V.S. Ugrappa of the Congress too scored a record margin of victory, defeating his nearest rival J. Shantha of the BJP by a huge margin of nearly 2.44 lakh votes. While Ugrappa secured 6,28,163 votes, BJP’s Shantha managed only 3,84,892 votes, while the two other Independent candidates in the fray lost their deposits. With this victory, Ugrappa will be entering the Parliament for the first time, though the term is less than  6 months. The LS Polls is scheduled to take place in April-May 2019.

In Shivamogga, BJP candidate B.Y. Raghavendra, son of State BJP Chief B.S. Yeddyurappa (BSY), managed to retain the seat for the party by defeating Madhu Bangarappa of the JD(S) by over 52,000 votes. While Raghavendra polled 5,43,306 votes, Madhu Bangarappa secured 4,91158 votes.

The by-election to the three LS seats was necessitated by the resignation of Yeddyurappa (BJP-Shivamogga), B. Sriramulu (BJP-Ballari) and C.S. Puttaraju (JD-S, Mandya) following their election to the Assembly in the May 2018 polls.

The by-poll results to the two Assembly segments sprung no surprise as the JD(S) candidate Anitha Kumaraswamy won from Ramanagara and Anand Nyamagouda of the Congress won from Jamkhandi (Bagalkot district) as expected.

Anitha defeated her nearest rival L. Chandrashekar of the BJP, who announced his retirement from the contest just two days before the Nov. 3 poll and backed the JD(S) candidate.

While the Ramanagara by-poll was necessitated due to the resignation of Chief Minister Kumaraswamy, who opted to retain the neighbouring Channapatna Constituency, after winning from both the seats in the May 2018 polls, the by-poll to Jamkhandi Assembly segment was due to the death of Congress MLA Siddu Nyamagouda, who died in a road mishap, just a few days after his election in the Assembly polls. While the Congress managed to make a deep dent into the BJP stronghold in Ballari, the BJP succeeded in retaining Shivamogga, which was represented by Yeddyurappa before his election to the State Assembly.

The by-polls to the three LS seats witnessed a tepid voter turnout, while the voter turnout for the Assembly Constituencies was much better, with Jamkhandi recording its highest polling percentage of 77.17.

The by-elections, especially for the Lok Sabha seats, began as a drab political exercise, but later turned out into a high stake battle for various leaders of the three political parties, including Chief Minister Kumaraswamy and former PM H.D. Deve Gowda of the JD(S), former CM Siddharamaiah and senior leader D.K. Shivakumar of the Congress and State BJP Chief Yeddyurappa and senior BJP leader B. Sriramulu. The prestigious Shivamogga LS seat was a battle between the sons of three former Chief Ministers — B.S. Yeddyurappa, S. Bangarappa (late) and J.H. Patel (late).

10 COMMENTS ON THIS POST To “By-polls: JD(S)-Congress coalition wins four seats, BJP one”