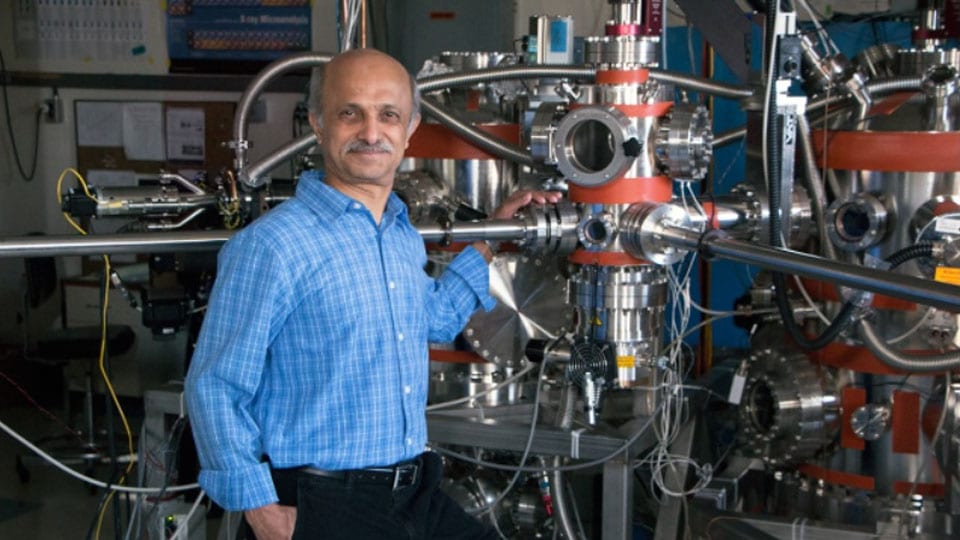 Quantum Physics deals with the behaviour of subatomic particles and is arguably the most complex branch of Theoretical Physics.  I do not profess to understand this highly abstract subject but know that classical laws of Physics fail at quantum levels.

It boggles the mind when told that a subatomic particle exists simultaneously at two different spots.  One location could be on your table and the other on the surface of Jupiter!

English Physicist Paul Dirac theoretically proved way back in 1930s that fundamental particles known as fermions should have a counterpart somewhere in the universe with an opposite charge – known as anti-particle.

Complicated. Difficult to fathom. I fail to comprehend.  Based on this theory it is theoretically possible to have ‘teleportation’ that are portrayed in science fiction movies and books.

Coorg-born Physicist Dr. Jagadeesh S. Moodera has been a scientist at Massachusetts Institute of Technology (MIT) since 1981. He has several path-breaking research papers to his credit. My wife and I had the good fortune of a guided tour of his laboratory at MIT during our visit to Boston to attend the Kodava Convention-2019, in September last year.

Dr. Jagadeesh explained the intricacies of the experiments that he and his team were involved in.   It was fascinating to see a huge setup with myriad tubes, probes, cables and instruments in order to create a 100% vacuum in a space of about 2 cubic centimetres.

Part of the experiment was conducted in this small space which was absolutely contamination free.  There was another setup equally complicated where a space was created for the experiment which was free of any kind of vibration – not even that created by the traffic in the streets distance away, or footsteps of students in the nearby corridors.  In addition, this space is cooled to -273 degree centigrade (that’s as close as one could get to -273.15 degree centigrade which is absolute zero).   The experiments were conducted under these ideal conditions and usually between 10 pm and 6 am when chances of vibration were the least.

The experiment Dr. Jagadeesh and his colleagues have been working on since 2012 was to discover what Italian Theoretical Physicist Eltore Majorana, extending on Paul Dirac’s theory, had postulated in 1937 that there should be some subatomic particles that are indistinguishable from their anti-particle.

Scientists have been looking for these particles named Majorana fermions. Many theories have emerged over the years.  Theoretical Physicists at MIT and elsewhere predicted that Majorana fermions may exist on solids such as gold under certain conditions.   Dr. Jagadeesh and his team were on a mission to discover the existence of the elusive Majorana fermion.

The experiment, extremely complicated, needed many long hours in the laboratory.  Dr. Jagadeesh explained how the delicate research was carried out at nano-particle level and observed through Scanning Tunneling Microscope (STM).  STM is capable of ‘feeling’ the presence of atoms and molecules.  3mm x 3mm was the size of the surface on which the experiment was carried out, consisting of nano-wires of gold, grown on superconducting material: Vanadium.

MIT News dated 10th April 2020 has announced the successful sighting of the mysterious Majorana fermion by Dr. Jagadeesh Moodera and team. This is a major breakthrough.   In Dr. Jagadeesh’s words ‘We have shown they are there, and stable, and easily scalable.’  Please visit webpage: http://news.mit.edu/2020/first-majorana-fermion-metal-quantum-computing-0410

The finding that Majorana fermions are scalable and could be made into qubits (individual computational units) is spectacular.  These qubits could be used to build the most powerful and error free quantum computers. This will be a step closer to the phenomenon known as Singularity, which predicts that by the year 2042 AD there will be computers that will have computing power of all the human brains put together!

Once Singularity is achieved, humans need not invent anything further.  Solutions to the most complex problems will be arrived at within seconds.  If we had these computers today, a remedy for the current Covid-19 would have been found in a jiffy!

Dr. Jagadeesh’s wife Dr. Geetha Berera is a senior lecturer in MIT and we had an opportunity to visit her laboratory as well.  The couple are totally dedicated to academics and research. Every year they visit Coorg and conduct a Quiz programme for school students.  They are in the process of starting a school in Coorg under their organisation – CREATE Gurukula Trust – focusing on encouraging young minds in research activities.  Meritorious students at Coorg Institute of Technology (CIT) are recipients of annual scholarships and awards instituted by Dr. Jagadeesh and Dr. Geetha. Dr. Jagadeesh and Dr. Geetha are eminent role models for young Kodavas to emulate.