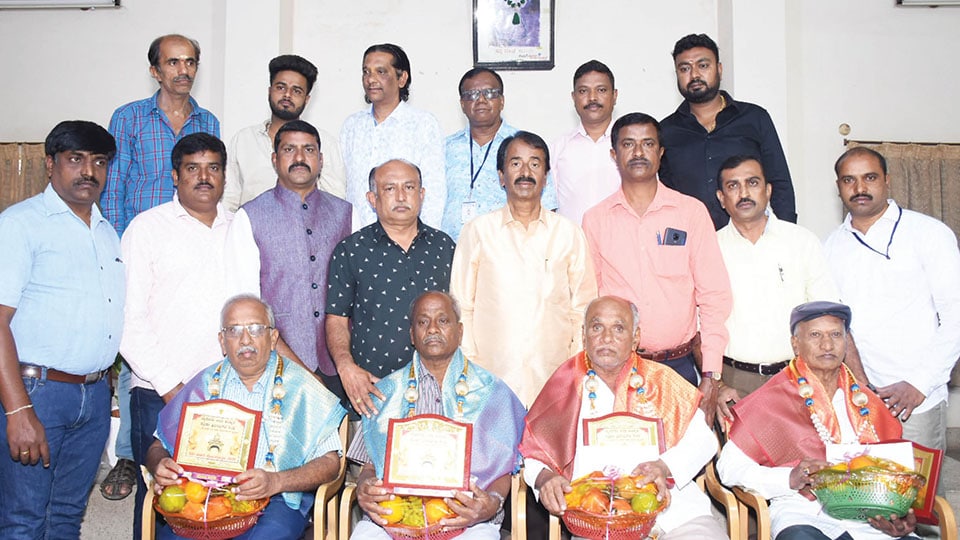 Mysuru: Stressing on the need for bringing newspaper distributors under the unorganised sector, former MLA Vasu has called for greater exerting pressure on the Government in this regard.

He was speaking after inaugurating the fifth anniversary of Mysuru Zilla Adhikruta Patrika Pratinidhigala Sangha at Mysuru District Journalists Association (MDJA) office on Tyagaraja Road in city yesterday, during which the Sangha’s New Year calendar (2022) was released and senior news paper distributors were felicitated.

Pointing out the job of newspaper distributors is a very important one as they deliver newspapers at the doorsteps of readers, braving sun, rains, cold and inclement weather, Vasu said that they must be brought under unorganised sector, for which he will make efforts.

Highlighting the role of newspaper distributors in the growth of print media, Vasu observed that though reports on the problems of workers of unorganised sector appear in newspapers, it is ironical that newspapers distributors themselves are an unorganised lot.

Maintaining that the media should throw light on the shortcomings in the health sector as it would help in reforming the sector, the former MLA said that the Government should consider extending benefits for news paper distributors.

Stating that he has given Rs. 50,000 for the Sangha’s Health care fund, Vasu said he was ready to give another Rs. 50,000. However, the money given by him alone will not be enough and as such the Sangha should look at other means of fund raising.

Expressing reservations about NEET Medical Entrance exam, which has replaced the earlier CET, Vasu said that this new exam has only benefited students from other states as they grab a good number of medical seats in colleges of Karnataka. He cautioned that this development would be disastrous for the state in the coming years.

READ ALSO  50 percent of deaths are due to non-epidemic diseases: Dr. C.N. Manjunath

Earlier, floral tributes were offered to the portraits of Chief of Defence Staff (CDS) Bipin Rawat, actor Puneeth Rajkumar and the city’s Newspaper House Owner Sridhar, who passed away recently.