Home » News » Next election will be held under my leadership: CM Siddharamaiah 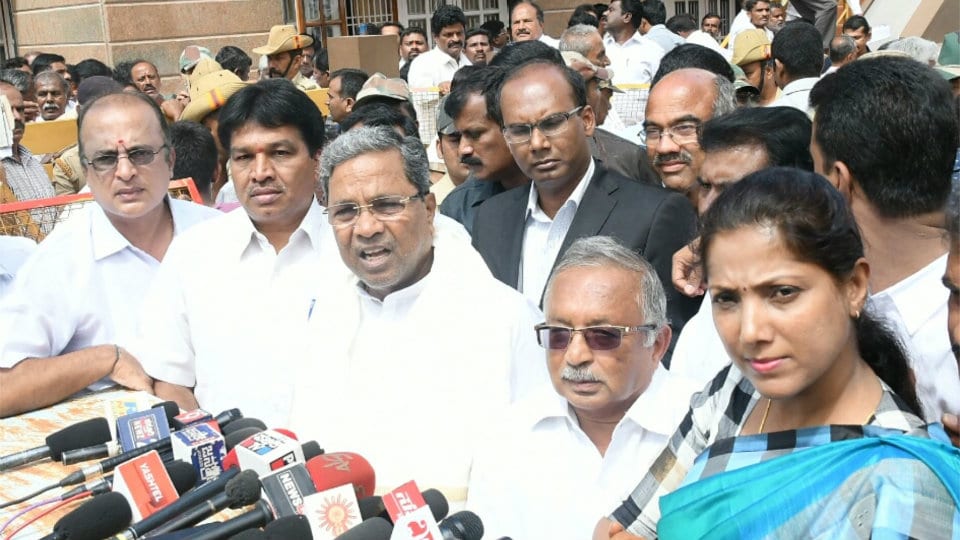 Next election will be held under my leadership: CM Siddharamaiah

Mysuru: There is no dissidence in the party and none of the leaders are disappointed with their new posts, said Chief Minister Siddharamaiah here this morning.

He was speaking to media persons in front of his Ramakrishnanagar residence. Stating that the Cabinet expansion will be done after the Assembly Session, which is scheduled to be held from June 5-16, CM Siddharamaiah said that decision on including Dr. Geeta Mahadevaprasad and H.Y. Meti into the Cabinet and who would become the Home Minister, after Dr. G. Parameshwara stepping down, would be taken later.

When asked about D.K. Shivakumar disappointed for not being made the KPCC President, Siddharamaiah said that there were no such issues and added that him being appointed as Campaigning Committee President would help in organising the party and comeback to power during the next Assembly polls.

He also stated that the High Command had clearly stated that the next Assembly polls will be held in under his (Siddaramaiah’s) leadership. Media persons also asked about appointing two Working Presidents for KPCC for which the CM said that it was done ahead of next year’s polls and added that it would be difficult for one person to travel across the State to organise the party.

Expressing confidence of good rainfall, Siddharamaiah said that he had not offered puja nor will offer puja praying for rains.

The Chief Minister also accepted applications from various people who had gathered in front of his residence.

Pourakarmikas, headed by their Association President Mara, met Siddharamaiah at his residence with regard to the strike called by them on June 16. CM is said to have instructed them not to go ahead with the strike stating their problems would be solved within few days time.

READ ALSO  CM to be feted in city

Later, Siddharamaiah left for his farmhouse in T. Katur from where he went to Bengaluru.